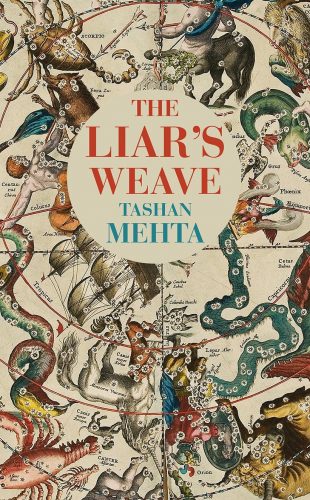 “The existence of free will meant we couldn't know the future,” Louise Banks hypothesizes in Ted Chiang's Story of Your Life. Banks is pondering a contradiction that the very existence of a Book of Ages (a chronicle that records every event, past and future) might present: knowing the future means we can, or will actively seek to act otherwise. If the Book of Ages is to be right by definition, and yet we can choose a course that it doesn’t present, thus negating the future, is it possible to resolve this contradiction? An option, as Banks suggests, would be to ensure that the book was not accessible to readers. Banks also remarks,“ … we knew free will existed because we had direct experience of it. Volition was an intrinsic part of consciousness. Or was it? What if the experience of knowing the future changed a person? What if it evoked a sense of urgency, a sense of obligation to act precisely as she knew she would?”

What, one might ask, drives the characters in Tashan Mehta's The Liar's Weave, to act as if their birth charts—determined by the gods themselves, interpreted by astrologers, and presented to them on their eighteenth birthdays—have laid out the future for them? Urgency or obligation? Fatalism guided by religious dogma? Or a certainty that the future has been secured by the ill fate of the hatadaiva, who compensate for the good luck of the “Fortunate”? That the future, however ordinary, is secure and life will not end up as it does for the hatadaiva?

The Liar's Weave does not provide any direct answers to these questions. It instead throws in Zahan Merchant, a boy born without a future, and capable of changing reality through his lies; a reality that exists for everyone save those who are aware that it has been shaped by Zahan. Zahan's powers pose a challenge to what has been determined by the birth-charts, and thus bring him to the attention of a guild of astrologers, the “in-betweens” who seek to understand, and if possible control, the devastating affects they might cause by changing what has been determined. But the in-betweens are not the only ones seeking to understand Zahan's powers. In Vidroha, the predatory forest on the outskirts of the fantastic 1920s Bombay in which The Liar's Weave is set, a group of hatadaiva await the one who can help change their fate, which has been marred with ill-luck to compensate for the fortune of the rest.  There is an assortment of characters that are locked in this struggle between what can be seen as two class systems: the fortunate drawing on the ill-fated other; the ones who have in turn been consigned to the worst the stars can preordain. Narayan Tarachand, never comfortable with the powers and influence he possesses as an in-between; Yaatri, the hatadaiva who leads his kind in forests  of Vidroha; Sohrab, Zahan's elder brother who helps him understand and control his powers, Porthos, Zahan's friend with whom he visits the forests of Vidroha.

But it would be too simple a reading to see The Liar's Weave as a conflict between those who want to preserve this order, and those seeking to overthrow it, in order to overcome the precariousness of their lives. Two morally ambiguous characters in Vidroha, Tamarin and Liling, are often entirely willing to sacrifice Zahan and Porthos for bettering the lives of the hatadaiva; Krishna, Tarachand's friend and confidante, is willing to deceive Tarachand for his own ends, but still cares deeply for him and is willing to go to great lengths to protect Tarachand and Zahan. It is this moral ambiguity that is perhaps the biggest strength of The Liar's Weave. The hatadaiva, the underclass of the novel, are not willing to suffer passively, but their actions also often invite suspicion from the reader.

Alongside the central plot, there are references to the Indian Freedom Movement, which had gained new strength in the 1920s, but leaving aside a few hints at what implications predestination might hold for the Movement, the question of how the struggle for independence would play out in this world is never fully explored. At one point, a student named Govinda requests the Association of in-betweens to “ … use our knowledge to read the future for our glorious nation, Bharat, and aid our courageous freedom fighters in defeating the British Raj.”(p. 36). The presence of the British Raj is astutely used to provide some background to the characters; Yaatri, for instance belonged to a nomadic tribe, the banjaras who like many tribes were classified by the colonial government as criminals—the process of bringing tribes with diverse identities and cultures into the jurisdiction of the Raj, and later, into the fold of the Indian nation has been a painful one for the tribes—eventually forcing them to disband, and Yaatri to wander and later settle in Vidroha.

But hints at the implications that Zahan's powers to change reality, or even the in-betweens’ powers to read the stars, might have for the Freedom Movement are never fully explored, and the narrative uneasily switches from these references to the main plot. What would have been pressing questions for anyone living in India during the first three decades of the 20th Century seem for Zaaan minor ones, as if he is concerned about little beyond the need to understand his powers and wander with Porthos in Vidroha. “Why just the kurta, why only the threads? He could lie about the Non-Cooperation movement that determines the threads—he could guide the fate of this country. The thought is dizzying. Where would such a lie leave him?”(p. 89)It often feels as though Mehta is, besides Zahan's story, trying to provide some historical or political context to the plot, but her narrative structure largely fails at doing the same. This is perhaps also the biggest weakness of the novel; its need to provide some historical setting without making an effort to fit the plot within it. There are no British characters in the novel, none of the central characters—with the exception of Yaatri—seem to have had their lives and identities affected by the overarching presence of the British Raj, and save for Tarachand working to keep Zahan away from involvement in any political conflict, there are seemingly no connections with the Movement. The sections where Tarachand attempts to keep Zahan away from the politics of the Movement shift abruptly to Tarachand's own personal anxieties and meditations over friendship:

There, see, the Swaraj party has begun. It should make the central legislative assembly an interesting one. No more the grandfather politics of the Parsis—debating, hypothesizing, endlessly considering. The Swaraj party is led by nationalists like Motilal Nehru: Swaraj is action.  And here, another movement is brewing … Have you seen India united like this before? It is evident now we can do it … His interest is not politics. He is doing this for the boy. Find the political centres of activity and predict those that will erupt in the coming years. Guesswork, all of it—but an in-between's guesswork is another man's truth. He must keep the boy clear of such centres. Political temptation does not mix well with the power and the fervour of youth … The boy must leave the country, away from Vidroha, away from the domain of the Sapta Puri universities. Away from Vidroha, and for the nationalists … Krishna does not leave Bombay—it seems he has no personal obligations in Benares. What does he do with his time? Parineeta says: we must invite him to dinner. People are talking. (pp. 268-9)

All of this—the narrative switching between Bombay of the 1920s and the forests of Vidroha, the passing references to the Indian Freedom Movement, revelations about characters ostensibly made to alter the narrative thread, but that end up having no bearing on it—make The Liar's Weave rather gauchely assembled, and the book seems overwhelmed by its own plot.

Mehta's website states that her interest lies, above all, in “the shape of a letter, the construction of a sentence, the meeting and parting of two plot threads, or the novel as a whole as it tries to capture this mindscape.” The fascination with the construction of sentences is evident in the The Liar's Weave; the prose is stylised and ornate, albeit sometimes rather overwrought, at the cost of plot and structure.

The Liar's Weave is an ambitious debut, and there are themes that are startlingly well dealt with: the joys of adolescence, Zahan's and Porthos' quest for self-discovery, the end of innocence, and coming to terms with the world. Mehta is well read in Indian mythology, and uses this to create a dense, original world. Her debut is evidence of great potential, but perhaps her strengths as a writer would be better realised if combined with attention to what makes for a strong novel: structure, a balance between depth and momentum, a sense of connectivity between multiple narrative points, and using linguistic skills in service of the subject, not convoluted exercises in and of themselves.