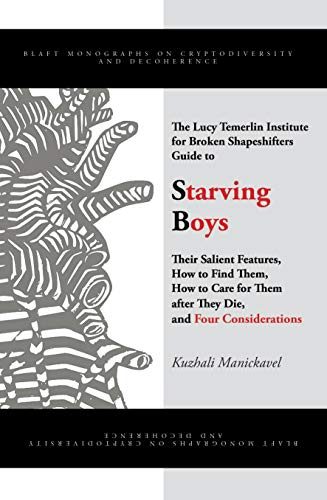 Creatures of myth, legend, and fantasy serve cultural functions that change over time. But how drastic are these changes, really? What makes a new creation subversive?

Let’s take a classic theme for fantastical stories: predation. Variations on two of our oldest fairy tales, “Little Red Riding Hood” and “The Wolf and the Kids,” can be traced back to Aesop’s fables, 2600 years ago—and probably go even further back in the oral tradition. In many of Aesop’s stories, the wolf is our predator, and in all subsequent iterations (sometimes as a tiger, hyena, or fox, depending on the teller’s geography), the core narrative concern is the predator’s threat to the vulnerable (sheep, hens, or children). Wolf-myths like this serve a range of cultural functions: they reflect the uncertainty of life, both literally and figuratively, beyond the familiar; they imagine punishments for those who wander from the straight and narrow; and they argue that predation is an innate quality of certain beings. It is simply in the predator’s nature to be dangerous, and the predator cannot ever change.

Other creatures of myth and legend—like sirens, mermaids, and witches—also act as predators, by targeting men who veer from safety, luring explorers and power-seekers to their doom. But men, too, have a longstanding role as “predator” in fantasy stories, where they trap selkies and other shape-shifting women by stealing their skins, forcing them to stay in the human realm. This latter sort of fairy tale, where shape-shifters thereafter serve as wives and bear these men children while longing to return to their otherworldly kin, reflects our species’ long and painful history of domestic abuse, forced marriage, rape, and quite likely postpartum depression.

Fantastical predators changed, though, in more recent centuries. In lieu of that rigid animality you find in earlier mythology (whereby a predator is a predator innately), a strong political component began to emerge. Now, imagined monsters were not born predators, but rather became them. This newer fantastical predator reflects political consciousness in, say, the vampirism of royalty and other upper classes; the secret lycanthropic brutality that can develop in even the most outwardly civil heart; and zombification pressures from spiritualities outside the mainstream or from “the masses” given social power. These predators often need to be killed in their respective tales, but with a quality of tragedy—for their monstrosity is circumstantial, not natural.

More recently still, a further sort of fantastical creature has arisen, one which seems to subvert perceptions of absent female agency in earlier incarnations of predator-prey fantasy tales. Whereas past forms of vengeful femininity (the “wronged woman”) have fleshed out fantasy-horror in antagonist roles, the right of vengeance now sits with our fantastical protagonists. Our Little Red Riding Hoods now all have claws. Our shape-shifting mermaids drag men back to the ocean for punishment. Sometimes the talons of these creatures can crush galaxies, or feed starving mothers with their prey of would-be predators—and earn Nebula, Hugo, and World Fantasy Award nominations in the process. They are here. They are our canon.

And with this canonical transition has come a striking complementary development: the flattening of their prey—the predators of old—into a narrative shorthand. We are witnessing, in other words, the rise of a different approach to the “wolf” in our cultural mythology, and its attendant fantasy stories. This wolf is immediately recognizable to readers in terms like “frat boy,” “Pick-Up Artist (PUA),” “guy in tech,” “narcissist,” “male friend of the family,” and straight-up “rapist,” “abuser,” or “creep.” These are wolves, furthermore, that we are invited to mock and diminish.

In Kuzhali Manickavel’s 2019 The Lucy Temerlin Institute for Broken Shapeshifters Guide to Starving Boys: Their Salient Features, How to Find Them, How to Care for Them after They Die, and Four Considerations … on Cryptodiversity and Decoherence, this phenomenon goes one further. A name has now been given to the “wolf,” which is simultaneously coded as a fantastical version of real-world threats to women, and also as a figure ripe for ridicule and dehumanization.

The Starving Boy will appear as a software professional in his early thirties with glasses, a receding hairline, drooping jeans and a blue Captain America t-shirt. He will always be wearing a backpack which, in the case of Starving Boys, will contain all his major organs. Under no circumstances should you remove a backpack from a Starving Boy because no one should ever remove someone’s major organs, even if the someone is just a Starving Boy and the organs are just in a backpack. (p. 5)

Manickavel’s nineteen-page guide to the care, keeping, and disposal of “Starving Boys” is seeded with shorthand references to masculinized forms of real-world violence and manipulation: some universal, some decidedly anecdotal. Manickavel’s Starving Boys ogle breasts, for instance, and “love certain things like pockets, violence, snails, Chopin, foreskins, the letter ‘R’, the idea of the idea of death, rhyming poetry, girl lips, boys with girl lips” (p. 2). They infest whole regions, have (literally) delicious delicate skin, and count among their enemies “people who are active on social media” (p. 4). They occasionally form-shift to take the shape of, say, the uncle who molested all your female cousins to a collective familial shrug (p. 6). They are also narcissistic, needing promises of violence and endless flattery to be wooed into your (Amazon delivery) box; and they are unfinished projects you can never, ever hope to complete (p. 12).

They are also, we’re told at the outset, difficult to pin down precisely because “they keep changing their behaviour to annoy everyone, especially people who identify as women.” And yet—whatever they are—they must have an intrinsic quality of offensiveness, like the wolves of our oldest fairy tales, because we are also told that it is “impossible to shapeshift into a Starving Boy.” Indeed, the titular Lucy Temerlin Institute is supposed to play host to “broken shapeshifters” for a reason (p. 1)—although this story never goes further into what, exactly, the Lucy Temerlin Institute does, or why it needs this guide for the care of creatures that it is “strictly prohibited” for readers to adopt.

Manickavel is, of course, no stranger to fiction of the unapologetically weird variety. The author of the widely celebrated Insects Are Just Like You and Me Except Some of Them Have Wings (2008) and Things We Found During the Autopsy (2014), along with stories in magazines like AGNI, Apex, Shimmer, and Strange Horizons, Manickavel has the ability to unspool richly detailed, entertaining, irreverently tangential depictions of slipstream worlds, through bite-sized tales that are just uncanny enough to make the whole exercise feel like playful sport even as it delves into painful territory.

There is also quite a bit buried in Manickavel’s chosen points of reference in this latest chapbook, not the least of which being Lucy Temerlin herself—a name given to a female chimpanzee who was raised by humans until the age of twelve, as a sort of test project to see if a chimpanzee could be trained to live as a human. Lucy was a star performer of domestic tasks until she became strong enough to resist, at which point she was painfully estranged from her human community, and set upon an excruciatingly lonely road to reintegration with fellow chimpanzees.

Lucy’s real-life story makes for a heartbreaking touchstone to Manickavel’s notion of “broken shapeshifters”—but it also cannot be read too directly as a metaphor for any of the figures alluded to or discussed in the guide itself. Too direct a reading of that origin story, after all, would suggest that this institute’s role is to rehabilitate other Lucy-like figures, other beings caught in a brutal limbo between worlds of animality ... which would then make this guide, bewilderingly enough, a resource for fellow Lucys. But when did the original Lucy—who would later be released into the wild and found without hands and head, likely the victim of poaching—ever lure, trap, eat, torture, and dispose of other creatures for the odd collective charge of being, well … annoying?

“Annoying” is an especially odd word choice for the Canadian-born Tamil writer of this tale. I’m not discounting the possibility that it has a more pointed correlate in another of Manickavel’s languages (e.g. “bother” and “molest” have linguistic ties between English and Spanish), but the idea that Starving Boys “annoy everyone, especially people who identify as women” casts a curiously broad net with respect to behaviour that justifies the extreme torture advocated for all of their species in this text. Starving Boys are apparently all decay, constantly being eaten by worms from within, and fit only for use as home-garden foundations or as ornaments due to their size (if not for the fact that they’re also invisible, no matter how much they insist to the contrary). They also cry a lot, and are too vacant to be a suitable place to lay in store one’s dreams.

Obviously, then, this chapbook’s target audience is feminized persons of an age in which the perils of dating, relentless sexual harassment, and the travails of unreciprocated emotional labour feels most potent and exasperating. However, this manual also echoes certain extremely abusive strategies found in PUA playbooks, and often in ways that go past mere critique of the latter, heading full circle into advocating for the same sort of dehumanization of another gender that PUAs do.

And yet, here, I suspect—on that uneasy edge of satire and sincerity—is also where the text’s association with Lucy proves strongest, because Lucy, acculturated one way for so long, could no longer function effectively in either the human or chimpanzee realm once expelled from the former and consigned to the latter. For years, she abhorred male chimpanzees especially, her sexual signalling attuned instead to the human environment of her upbringing. If she was violent, then—if she lashed out and hurt others around her—was she not simply wounding from within her wounds? Is it possible that the reader here is meant to feel vindicated in doing likewise?

The “wolf” has travelled far in global mythology—but also not so very far at all.

In most versions of “Little Red Riding Hood,” after all, the wolf is eventually split open—sometimes by the woodsman, sometimes by Little Red. Manickavel’s work joins a range of contemporary fantasy writers not in subverting the original, but in lingering upon this late aspect of the tale: the part, that is, where the predator is eviscerated, and the would-be prey revels in its agency.

The critical difference, of course, is that today’s fantastical reimaginings, including Manickavel’s latest, offer no clear divide between that predator-archetype of old (i.e. an intrinsically and irredeemably malevolent non-human being that can only be murdered to be overcome) and a spectrum of behaviours among contemporary men whose actions, even and especially when heinous, do not make them any less human.

If this is truly the moment, then, to reclaim age-old predation tales to better suit women whose skins feel well and truly stolen, fantastical work like The Lucy Temerlin Institute for Broken Shapeshifters Guide to Starving Boys invites us to look very closely at the creatures we’re creating to serve our culture’s needs—and to ask ourselves at what point we become the “wolf” as well.

Like Loading...
© Copyright 2019 By: M. L. Clark
About M. L. Clark
M. L. Clark is a Canadian immigrant to Medellín, Colombia, and a writer of speculative fiction, reviews, poetry, and cultural essays.
No comments yet. Be the first!