Reviews
Size / / /
The Outside by Ada Hoffman
By: Duncan Lawie 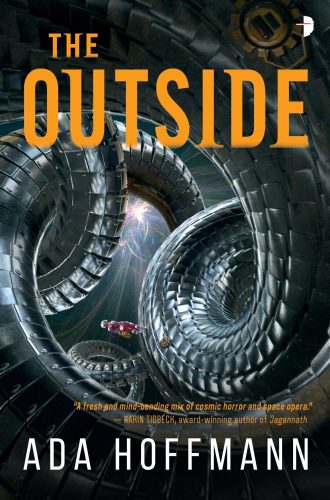 What an interesting book! There are gods. They are some form of artificial intelligence and their creative self-awareness has emerged from absorbing human consciousness. The implications of this take most of the rest of the book to work out. A diary entry that heads the first chapter does most of the conceptual framing we need to understand the setting, though it seems near incomprehensible coming to the book cold. Indeed, the very next paragraph seems to be a huge disjunction from such a future, as the protagonist uses a pocket calculator in an attempt to check the mathematics of a new reactor which is about to come online. An intriguing start.

The gods of The Outside are several, with different aspects—Techne, Philophrosyne, Aletheia, Nemesis, for example: all good Greek names which let us guess at their character, at least once aided by clues such as how Aletheia is the god of knowledge and learning and Philophrosyne is focused on love and communal bliss. Nemesis becomes the god we hear most of, as She battles against heresy.

The terminology of gods, prayer, and heresy shapes our responses to the text. These are strong words, which the gods have subsumed to retain strength of impact. The gods have technology far beyond human capability; most of humanity is happy to live satisfying lives under the eyes of the all-powerful, happy that, when they die, each soul will be absorbed by the god most suited. People have a galaxy-wide society to partake in and, it would seem, ordinary lives on ordinary planets, even if we mostly see this by contrast.

At the beginning of the novel, its protagonist, Yasira Shen, is working on a human-built space station powered by a reactor named in her honour. Indeed, Yasira's scientific brilliance is displayed throughout the book. The reactor is named as the prototype Talirr-Shien Reactor, with Yasira being a prodigy, the protégé of Dr Talirr. Talirr has disappeared, resulting in Yasira being voted Head of Department. The book is almost as quick to introduce Yasira's girlfriend, Tiv, and goes on to demonstrate a society where race, gender and sexuality are no more than descriptors. Later, we are introduced to a kind of human who can reshape into various forms, with the pronouns moving with the gender presentation. There is an amusing, yet sincere, moment of confusion when two characters use different pronouns for the same person as they last saw the individual present in different genders.

As we learn more about Yasira, the shape of her world also comes into focus. She self-describes as autistic and her actions and reactions reinforce that description. This does not mean Yasira is disengaged from the world. Sections written later, from the perspective of one of her antagonists, also show the lack of affect we might sometimes associate with autism, but the blankness of that antagonist gradually reveals itself as a psychopathology.

Neurodiversity seems to have a less neutral position in this setting than gender diversity. The novel’s more sensitive societies try to avoid the word madness whilst providing support for all; others seem to consider non-neurotypical people solely as a problem. This tension across human space is a useful thread as the plot develops, and as the concept of true madness becomes a point of discussion.

Wait: human space? The gods have technology, which they give to humanity. There are warp ships which can reach relativistic speeds; portals so that stepping from one planet to another is simple. Ansibles connect communications across the galaxy and terraforming continues. The gods select groups from multiple source planets to seed new populations, ensuring genetic and cultural diversity.

There are aliens, but they don't seem to have much interaction with regular humanity. Indeed, the two additional intelligences which have a part in the book are working with an angel. Angels, of course, intercede between the gods and humanity. In The Outside, they do this through technology embedded in their bodies, in their brains. People choose this, and are rewarded with longer lives for their service, greater cyborgisation as a reward for success, and promotion towards archangelic status—becoming closer to the gods but less human. Failure, at least for those working for Nemesis, is treated harshly.

Apart from the reactor, the technology on Yasira’s space station is quite limited. She and her colleagues are humans who wish to develop without reliance on the gods. But, clearly, there is an upper bound on what humanity is allowed to achieve. Too-complex computing machinery is heresy—stepping into the zone of gods and angels. The Outside is also heresy, at least in part because the gods and their agents don't know how to deal with it. And so, Dr Talirr's atypicality has in turn been defined as heretical madness. Psychologists in the service of the gods attempt to 'treat' her to normality. Instead, she learns how to keep her views secret, to pursue her heresy in academic clothing. Yasira learns all this when the angels disappear her, too.

The machinery created from Yasira's mathematics does something strange to the natural universe. There is an echo here of the calendrical mathematics of Yoon Ha Lee's Machineries of Empire trilogy—perhaps because those novels also talk about heresy. There is, too, a much stronger call out to the Cthulu Mythos: whilst Lovecraft is not quite name-checked, there is discussion of the old myths of humanity, and of alien species, and of how Outside has impinged upon us. Before her disappearance, Dr Talirr puts this rather brutally: space is a lie and time is a lie, everything is lies. The Outside, the mathematics and technology that collapse reality, can allow anything to happen … and that includes calling upon creatures from beyond the Universe.

The nature of these beings is not quite made clear, though they often seem to have tentacles—of course—and they have will and they drive humans mad. (Even though the better peoples of human space do not wish to accept the term, they must acknowledge this other kind of madness.) And yet, by the end of the book, the concept of what has happened to those affected by Outside is less simple. Those not simply killed, that is.

Yasira has always tried to be a good girl, but hasn't had much faith in gods. When her own experiments go so wrong, an angel tells her she is herself on the edge of heresy—that working with the gods is her only path back to normality. She is ready to believe the gods are in the right, even as she is threatened with being destroyed and devoured by Nemesis. The offer of redemption requires her to help capture Dr Talirr. Yasira is shown distinctive proof of Talirr's murderous use of The Outside and agrees, despite her former loyalty to her doctoral supervisor.

Even at the end of this novel, it is still desperately unclear whether the gods are worse than the alternative, even as it becomes clearer that Yasira’s understanding of right and wrong has become richer. For more than half the novel, there is a brilliant equipoise as to where the worst evil lies. Yasira vacillates and it's not clear from one chapter to the next whether Dr Talirr or Nemesis is worse. The choices Yasira eventually makes are as much from the heart as the head. These choices are hard won—Yasira genuinely develops over the course of the novel. Whilst she is still someone who lives mostly in her head, her moral sensibilities have grown hugely by the final pages of this book. Presented with huge choices she reacts at first, later she responds and eventually, she is making both considered and instinctive decisions. The personal growth occurs under immense pressure and we also see moments where she fails to handle this, where she is manipulated, making her journey all the more credible.

It is almost disappointing that the conclusion sets up further volumes, as this book stands so well on its own. Still, there is much still be investigated, described, perhaps even understood, in both the plot and setting.

Like Loading...
© Copyright 2019 By: Duncan Lawie
About Duncan Lawie
Duncan Lawie has been reviewing SF for half as long as he has been reading it, although there was a quiet period during two years as an Arthur C. Clarke Award judge. His reviews also appear in the British Science Fiction Association's Vector Magazine.
No comments yet. Be the first!