Reviews
Size / / /
The Psychology of Time Travel by Kate Mascarenhas
By: Jenny Hamilton 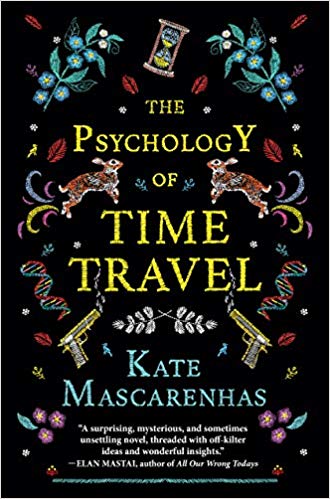 In Kate Mascarenhas’s debut novel, The Psychology of Time Travel, history is rewritten such that four British women and a bunny called Patrick Troughton travel through time two full years before two American men walk on the moon. It’s an invigorating start to a book that features virtually no men—the rabbit Patrick Troughton[1] is one of four very minor male characters—and allows its women the full range of morality, nerve, and emotional complexity.

As with many time travel books, it’s difficult to describe this one succinctly, but I’ll give it a go. Barbara, Grace, Margaret, and Lucille successfully invent time travel in an unfussy first chapter, but when they go to the press, Barbara (Bee) has a very public breakdown that seems to be attributable to all the time travel she’s been doing. Margaret, who is the money behind the project, freezes Bee out at once and encourages her coworkers to do the same. While Bee goes on to live a regular life, the time travel facility begins to grow into a vast and complex organization, called the Conclave, with its own legal system, rules, and culture. One timeline follows Margaret, and the increasingly grim and abusive measures she puts into place to ensure that no time traveler will suffer a breakdown like Bee’s and discredit her work.

The other two (main) timelines follow Bee and her adult granddaughter Ruby, in late 2017; and in early 2018, a Seychellois museum volunteer called Odette who finds a corpse on her first day at work. At first the reader doesn’t know the identity of the body, though we are led to believe it’s one of the four original time travelers. Ruby learns about the murder in her own timeline (i.e., several months before it takes place). Her drive to protect her grandmother brings her into contact with time-traveling versions of Bee’s former coworker, Grace, who knows some things about Ruby’s future that she sometimes hides and sometimes, unnervingly, reveals. Odette, meanwhile, is deeply unsettled by the violence and mystery of the old woman’s death, and she becomes determined to find out what happened, even if that means infiltrating the secretive and powerful Conclave itself.

Mascarenhas is more interested in the culture of time travel than in its mechanics, so any readers searching for hard science fiction will be disappointed. I went into this book with the understanding that it was about four women inventing time travel, a premise that, as it turns out, is covered and set aside within the first twenty pages. The Psychology of Time Travel does what it says on the tin, which is to explore the ways that time travel changes the interior lives of the people who practice it. At first the title seems to refer to Bee’s breakdown, but Mascarenhas and this book are cleverer than that. Margaret, the project’s founder, becomes so determined to prevent a repeat of what happened to Bee that she does her best to excise any emotions in the Conclave’s employees. Early on, a time traveler called Fay speaks about her response to death:

My mother had died of a stroke while I was away, so I said I’d visit my sister at some point to talk through funeral arrangements. … She kept going on about how we’re orphans now. It’s not that I don’t know how she feels. I know she believes Mum’s gone for ever. But I don’t want to be reminded of feeling upset in that way. It doesn’t seem very … relevant … any more. Not to my life. I hate admitting this, but I wished my sister would shut the hell up.

Not only is this a punch in the gut once you’ve read the book through to the end, it’s a perfect encapsulation of the culture Margaret works to create at the Conclave. In attempting to avoid one kind of disaster (Bee’s breakdown), she ensures that another kind of disaster will inevitably occur—the creation and endurance of an institute devoid of empathy and suspicious of kindness.

Time travel books tend to engage heavily with questions of free will, destiny, and inevitability, and The Psychology of Time Travel is no exception. Mascarenhas walks a fine line here. On the one hand, her system of time travel precludes the possibility of change. A handy glossary in the back of the book notes:

Consistency principle: This principle states that the probability of any action or occurrence that would cause a paradox is zero.

On the other hand, the whole book is an argument for making change around the edges. A key prop in the book is a vintage Candybox, a toy that lets you insert a sweet, watch it dissolve, and then see it reappear a minute later, having time-traveled into the future. Margaret plays a vicious game called Candybox Roulette, where you fire a bullet into a modded Candybox and take your chances about whether the bullet ricochets straight back into you or time travels farther into the future, “to the possible harm of whoever operates the machine in the future.” Cruel though this is, we see the flip side too. Time travelers like Grace can choose to seed the future not with bullets but with kindness, like allowing non–time travelers[2] to speak with dead loved ones one last time. In a sense, the outcomes are all fated, the good as well as the bad; but it’s clear that the moral choice still exists, that a Grace or an Odette can make different, kinder choices than a Margaret, in service of a different, kinder timeline.

More than anything else, this book is just fun, the kind of fun that lets you sit back, stop worrying, and enjoy the ride. I never knew what was coming next, even when the characters told me exactly what to expect. Mascarenhas also has a trick of revealing solutions much sooner than I expected to get them, which felt less like a cheat and more like an affectionate boop on the nose for believing in the primacy of chronological time in a time travel murder mystery. Other times, I realized that Mascarenhas had already given me the solution to a mystery, and that I simply lacked the context to understand it at the time when she first mentioned it. Time travel books are already tricky to pull off. To make the structure and experience of a time travel book feel itself like time travel is a magnificent feat of writing.

Despite the panoply of awfulness at the Conclave, this book is grounded in characters and relationships that are easy to care about, most prominently the strong bond between Barbara and Ruby, her granddaughter. Odette’s strong moral compass, coupled with her struggle to get past the trauma of finding a bloody corpse, stands in stark contrast to the ethical ennui of many of the time travelers. On a reread, I found richness in many of the other relationships, now having a clearer sense of the connections between characters and the full stories of their choices. Perhaps most notably, Ruby enters into a romance with a time-traveling Grace. Though their courtship occupies only a small part of the book, Mascarenhas had me shipping them straight away, with a romance that brings together the lighthearted banter of a first date with the bone-deep familiarity of a long-term relationship.

The Psychology of Time Travel engages with the conventions of its genres while simultaneously managing to feel like no time travel book or mystery I’ve read before. It’s a glorious puzzle box of a story, a near-flawless first-time outing from Kate Mascarenhas that promises to repay multiple rereads. It will have a permanent place on my bookshelf.

[1] Patrick Troughton is the second-best Doctor after David Tennant; do not @ me.

Like Loading...
© Copyright 2019 By: Jenny Hamilton
About Jenny Hamilton
Jenny Hamilton writes about books for Booklist and Lady Business, among others. She is a blogger and podcaster at Reading the End, named after her disconcerting (but satisfying) habit of reading the end of books before she reads the middle. Her reading enthusiasms span from academic monographs to fanfiction, and everything in between.
No comments yet. Be the first!