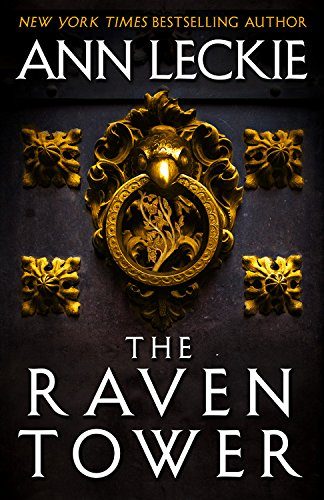 I have read all of Ann Leckie’s books, which is just a way of saying that she has only written five of them, and they have all been delightful in different ways. The Raven Tower, her first fantasy novel, is just as assured as her four previous science fiction works, and just as much fun. Although it’s different in the obvious ways, starting with the fact that her science fiction novels are set in the high-tech space opera universe of the Imperial Radch, there are deep underlying similarities. There is a through line about language and power in all of Leckie’s work, and in The Raven Tower that concern is made fascinatingly concrete: the book is set in a world where the utterances of gods (and humans, albeit indirectly) have power, and it is narrated by one such god, a rock known as the Strength and Patience of the Hill.

The action ostensibly concerns the succession to the seat of the Raven’s Lease in the realm of Iraden: Mawat, son of the Lease, rushes home to the city of Vastai with his loyal aide Eolo at his side to find that his ailing father has apparently died and his uncle Hibal has taken over as the Lease with the full approval of the Mother of the Silent and the advisory Council of the Directions. Unlike Mawat, Hibal was not previously declared the heir to the Lease, though as time goes on it becomes clear that Mawat’s father was not the best Lease and Mawat himself might not make a great one either.

The parallels to Hamlet are clear, but also are guidelines rather than strict equivalences, just as the Raven’s Lease is both like and unlike a king. As one might guess from his name, the Raven is a god who prefers to possess ravens, but it is difficult for humans to communicate with birds, even one that has been groomed from the egg to be the Raven’s Instrument. The Lease is a human who dedicates their life to interpreting the Raven’s responses to the rest of the populace’s questions via the Instrument and asking those questions in the first place, which gives them a great deal of power. But the Lease cannot act without the approval of the Council of the Directions and the chief priest of the God of the Silent Forest, the other god who rules in Iraden, and the Lease agrees to give up their life to the Raven when the Instrument itself dies. The sacrifice gives the god power; that it is willing makes it all the more powerful. Thus the accusation that Mawat’s father abandoned his seat without offering his life to the Raven is an extremely serious one, and Mawat has a great deal of personal stake in his insistence that it cannot possibly be true.

Hamlet being Hamlet, Mawat’s response after sulking in his rooms for several days is to sit naked in the square outside the Raven Tower for several days more in a recognized form of public rebuke. It is left to Eolo to do the actual legwork of talking to people to try to work out just what happened when Mawat’s father ostensibly disappeared, against all of his vows as Lease, and to try to clarify why a group of Xulahn travelers are hanging around the city making not very subtle attempts to ally with Mawat while claiming that all they want is passage across the strait to Ard Vusktia. Eolo is a very capable soldier who has his own reasons for his devotion to Mawat, though Mawat doesn’t always precisely deserve it, but he is also a southerner in a northern town, even if the fact that he has never visited the city of Vastai before is both an advantage and a disadvantage to his efforts in turn. I also enjoyed Eolo's representation as a trans man; one gets the sense that the god doesn’t find it very significant, just as most of the other characters don’t.

The other Hamlet parallels are worn more lightly. Leckie gives the lady Tikaz more to do than Ophelia; I liked the twins Oskel and Okim, her equivalent of Rosencrantz and Guildenstern, much less than I do the two hapless side characters in Shakespeare’s tragedy. I am prepared to admit that some of my affection for the latter two comes from Tom Stoppard and, as the Strength and Patience of the Hill points out, how Oskel and Okim are and their antagonism towards Mawat is not precisely their fault: unlike Rosencrantz and Guildenstern, they have more than simply money and favor on the line.

The Myriad and the Strength and Patience of the Hill spend a lot of time debating how those gods walked and worked their will without language. Even the gods must tread carefully in this respect, for what the gods utter becomes true, and if they say something they do not have sufficient power to enact, that is the end of them. Consequently there is a lot of hedging, a lot of “here is a story I have heard” and “it may be the case that” in their speech. But they are also fond of the humans who begin to worship them, and who by worshipping them teach them human language, through which they may communicate with their devotees. Through the concerns of their followers, both the Strength and Patience of the Hill and the Myriad eventually get swept up in the Raven’s war on Ard Vusktia, becoming part of an alliance focused on the city’s defense. But things are not all as they seem in the city, and the Strength and Patience of the Hill finds itself playing the role of the Sampo in Finnish mythology, endlessly producing foodstuffs while the gods of Ard Vusktia plot amongst themselves.

That in Mawat and Eolo’s time the Raven’s possession of Ard Vusktia is a settled matter leads the reader to suspect that the war does not go as well as the gods and people of Ard Vusktia could want. But as the tale goes on the question also becomes just what happened to the Strength and Patience of the Hill, who avowedly does not like to possess other creatures, and where it is now—how does the god know Eolo’s behavior so well as to describe it to him in the second person? How does the Strength and Patience of the Hill know Mawat, and his father, and his uncle Hibal so well? What is the connection between the two halves of this story?

Here again is where the book’s concern with language, and names, and power becomes important: books have titles, and titles mean things. The full title of Hamlet is The Tragedy of Hamlet, Prince of Denmark. The title of this book is not Mawat or even The Good Eolo; it is The Raven Tower, and as the Strength and Patience of the Hill spends the whole book telling Eolo, words have meaning. Titles of books, just as much if not more so. The Raven Tower is Hamlet told by a rock, but it’s also a story in which the rock is the protagonist, not Hamlet or Horatio or anyone human. It takes the reader a while to realize this; it takes Eolo a good deal longer. The tale is told to him in the second person, large chunks of it describing his actions very closely indeed, but that does not mean it is actually about him.

One element that makes the Strength and Patience of the Hill’s narrative so engaging is its very slow discovery of its own emotions, and of working out what being a god actually means. Or, what does a rock want with worshippers? Well, quite a lot, it turns out.

Why, as long as I’d been in this world already, should I care if my end came in another millennia, or a hundred of them? What sort of urgent business did I have in the world that I did not want to leave it? When I had spent my long time listening to fish, or staring at the stars? What was the point, what had ever been the point, in my constant, unconscious effort to keep that view of the stars?

None except that I had wanted it. It had made things pleasant for me.

What was the point, when short-lived humans would die anyway, and others take their place?

And humans, who by my reasoning had less ground than I to think anything they did might matter in any real way, did far more. They traveled. They changed the landscape in large and small ways. They put plans in motion that they knew they would not see completed—plans that would benefit not them but their children and grandchildren. When I—I had kept myself clear of dirt and leaves and snow.

Perhaps the length of one’s life was not important—except in the way it is to so many living beings, desperate to avoid death. Perhaps, long or short, it mattered how one spent the time. (pp. 128-29)

To say too much more would be to spoil the fascinating ending, but I can say that well before the end of it I was rooting for the Strength and Patience of the Hill to accomplish its ends, even when I didn’t fully grasp what they were. The power of language, in this book, is the province of gods; Leckie demonstrates the power that it has even in human hands: not to directly enact reality, but to change and challenge our understanding of reality all the same.