Reviews
Size / / /
The Return of the Incredible Exploding Man by Dave Hutchinson
By: Duncan Lawie 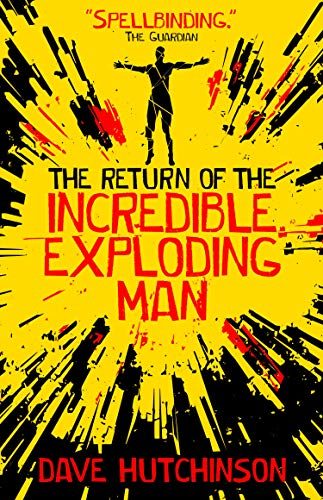 I spent much of my time while reading this novel looking for undercurrents. I have come to expect complexity and subtlety when I see Hutchinson's name, and there are indeed moments in this novel in which Hutchinson seems to call back to his Fractured Europe sequence: its community of East Walden Lane is not quite, legally, in the town of Sioux Crossing, and it seems quite hard for strangers to find it. With a little imagination, one of the town’s inhabitants could easily be a courer. But I came to feel that this was reading into the novel, rather than reading the book in front of me.

The town of Sioux Crossing is so neat and upbeat it seems almost like a Potemkin Village. The Mega-rich Clayton has revived this place with his money; repaired or rebuilt the physical infrastructure and provided the townsfolk with purpose. He has also brought thousands of fresh earners into the area — those who are building a new supercollider in rural Iowa—which, of course, Clayton is funding.

This (re-)construction and renewal reminded me of Nancy Kress's story “Cost of Doing Business” in A Year Without a Winter. In both cases, the central figure is a man of seemingly infinite worth who bends America to his will through the simple expedient of spending money where he chooses. Each of them has a "higher vision", a larger purpose than simply making towns work better, but this ante—no-one quite wants to call it a bribe—allows him to carry out his (super expensive) pet project.

This plot driver has shown up in science fiction since at least E. E. Smith's Skylark stories first hit the pages of Amazing magazine in 1928. Yet there was a long period in both SF and the world during which projects of this scale were the work of governments. It is interesting that, in the age of Bezos and Musk, we are creating their fictional equivalents again, at the same time that those men seem to be trying to turn SF into fact. Hutchinson doesn't enter into any deep critique of this, though he provides the novel’s British protagonist, Alex Dolan, with a sense of unease. A journalist without a job, Dolan has all of his debts paid off by Clayton and is invited to write a book about the supercollider. He eventually signs up to live in the hard-to-find East Walden Lane—and begins to write about the whole project.

This early section is lightly spiced with visitations from an eerie figure, which any reading of the title suggests is the eponymous Incredible Exploding Man. I found myself wondering how much longer Hutchinson could hold the tension together without getting to the science experiment which results in someone gaining superpowers. Instead, we get a completely different middle section to the novel. Dolan settles in and makes friends, finds opponents, builds his portfolio and writes away. Indeed, we are told several times that he is writing. When this is detailed, I found myself believing that we were seeing the author's experience of frustration with a project:

I have a lot of notes

a series of disconnected chapters and notes

Still, we can't spend too much time watching a writer not writing, so there are Events. A snowstorm, a barbecue, his manuscript being released to the world by a hacker, his house burning down. Something of a tic emerges: Dolan’s use of the term “edge effects” when in the presence of strange science. This is a lovely way of showing our journalist is out of his depth and effectively saying, “shit happened.” I am tempted to take up the term in my own life.

The odder and uglier things that happen to Dolan eventually drive him to employ his journalistic skills properly. His investigation makes for a satisfying read, with clues and red herrings aplenty—entertaining enough that the title, the implicit presence of the Incredible Exploding Man, retreated from my reading consciousness. Instead, I found myself comparing Dolan's experience as an expat in middle America with the events in the early parts of Paul McAuley's The Secret of Life (2001). Dolan seems to settle more comfortably than the protagonist of McAuley's book—but he also has the advantage of relative wealth and less ambition. Dolan does, occasionally, rail at being thought English rather than Scottish, but his expectations are low, to the extent that this feels more reflexive than active.

Indeed, much of the story rides on whether we find this rather passive protagonist to be pleasant company. The book is a close third-person narrative; we aren't inside Dolan's head, and though this very slight distance gives the impression that we are reading "fact," rather than the perspective of an unreliable narrator, it nevertheless places us in permanent proximity Dolan and what he thinks. And his is a slightly dour, downbeat view of the world, neither cynical nor particularly hopeful.

Eventually, we need to get on with the science experiment—with the bestowing of those superpowers on this unassuming Scot. Hutchinson writes well about things impossible to comprehend. He combines clear detail with meaningless confusion effectively:

Time passed, or did not. Like all the other dimensions here, it seemed either impossibly complex or absent altogether, or a combination of the both. He imagined himself sitting very still, but that didn't work very well, so he allowed himself to drift, or everything to drift around him.

The next chunk of the book mostly fulfills the foreshadowing of the first quarter, as Dolan gradually discovers what he is actually capable of, and what has happened to the others who were in the control room with him. However, Hutchinson then has to work out what to do with a character who has seemingly unbounded power. Dolan seems to be the only coherent survivor of the major event, but he has a role as a safety valve, tying him back to humanity. Dolan will, at some point, have to deal with an antagonist; but it would appear his greater enemies are ennui and angst. By this point, Alex Dolan has more in common with Dr. Manhattan in the original Watchmen comic.

Indeed, by the novel’s final part it has entirely run out of steam, as Dolan’s misanthropic grumbles—even his observations about the rights and wrongs of government action—offer little inspiration. Perhaps we are meant to take it as evidence that vast power doesn’t necessarily deliver change in character – but this feels like a rather thin message for the novel to rely upon. I may be damning this novel with faint praise when I say it is a perfectly pleasant read, but I had hoped for more from Hutchinson. From Dolan, though … well. What does one do with seemingly infinite power and a tedious ongoing moral debt to the human race of which one was once part? Particularly when one has neither the appetite nor the inclinations towards more than a decent sandwich.

Like Loading...
© Copyright 2019 By: Duncan Lawie
About Duncan Lawie
Duncan Lawie has been reviewing SF for half as long as he has been reading it, although there was a quiet period during two years as an Arthur C. Clarke Award judge. His reviews also appear in the British Science Fiction Association's Vector Magazine.
No comments yet. Be the first!