Reviews
Size / / /
The Rift by Nina Allan
By: Marcel Inhoff 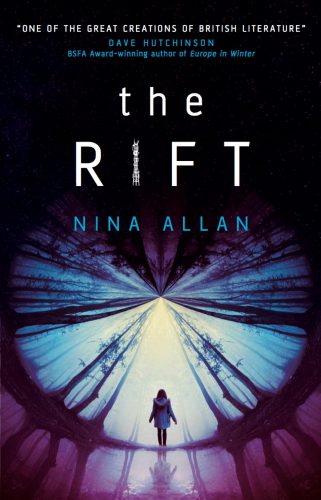 The Rift is Nina Allan’s sophomore novel, and it picks up where her debut, the widely admired The Race, left off. It is not a sequel in the usual sense: plot, setting and characters are completely new. On the other hand, Allan continues her literary work of interrogating genres, and connecting serious topics like domestic abuse, sexual assault and male violence to the language of science fiction. A few years ago, it was fashionable to talk about “slipstream” novels, novels that are hard to pin down to any genre convention, but that instead move in between genres. The Race and The Rift are both perfect examples of that genre, and far away from it.

Allan’s novels contain science fiction, and so, to a point, they are science fiction novels, but they are also literary fiction, with everything that genre entails. Yet they don’t “slip” between genres—Allan offers clearly marked transitions, new chapters, sometimes different font, to mark where a different genre is used. Allan exploited the possibilities of this mixture to excellent results in The Race, a novel that started as science fiction, then told us the story of the apparent author of that science fiction, and ended with offering us two more varieties of science fiction. The Race was a novel that asked us to see science fiction as a genre informed by life, by concerns of gender, race, and violence. It offered a view of genre as a way of dealing with similar material, different languages, almost. It made the writing of science fiction an explicit concern, and in doing so, also named a variety of novels as parameters for us to understand genre and expression, ranging from James Herbert’s classic horror novel The Rats to Iris Murdoch’s The Unicorn. It wasn’t perfect, the transitions were a bit abrupt here and there, but the arrival of an exceptional new talent was clear enough.

Like The Race, The Rift contains a science fiction tale within, and it also asks of us that we view genre as a way to express and interrogate reality. However, while Allan’s debut was occasionally ambiguous, and did not provide clear answers to the many questions it offered, it was mostly clear regarding the novel’s ontological questions: we left the novel with a clear sense of what was real and what wasn’t, with a few minor exceptions. This cannot be said of The Rift, which makes many suggestions, but offers few firm answers: what’s real, what isn’t? Can a story be told with the tropes and all the bells and whistles of science fiction, and still be true?

The basic plot of the book seems simple: a young schoolgirl vanishes without a trace, and without any explanation, and turns up again without being able or willing to explain what happened. This isn’t entirely new, and Allan even presents us with a movie analog: Peter Weir’s classic Picnic at Hanging Rock, about a class of schoolgirls that goes missing. It’s no accident that Allan names the movie as a reference here rather than Joan Lindsay’s original novel. While The Race circled around books as parameters, many of the central and explicitly named references in The Rift are movies. Apart from Picnic at Hanging Rock, we have Alien, The X-Files, Robin of Sherwood and others. Allan even occasionally employs the typographic conventions of movie scripts to structure some dialogue or observation. Indeed, in contrast to the previous versions of this plot, including Weir’s movie, we do get an explanation, though not an immediately satisfactory one. Julie, the vanished—and returned—schoolgirl, now a grown woman, tells Selena, her sister, a tale of where she’d been in the years since her disappearance.

And what a tale it is. She tells her sister that on the night of her disappearance she passed through a rift between worlds, and landed on a different planet. She grew up on that planet and offers her sister detailed descriptions of the planet and its culture. In these descriptions, we find elements of the “real” world we learned about previously, but we also find elements that reflect on the structure of the whole book, and possibly the veracity of her tale. The most interesting of these elements is a book called The Mind-Robbers of Pakwa, supposedly written by a writer from the other side of the rift. This book is a memoir of sorts, but is sold and reviewed as fiction by people on the planet Julie claimed to have landed on. The debate about the veracity of that memoir mirrors the doubts and questions about the veracity of Julie’s own strange tale and various parts of it may or may not offer clues to what “really happened.”

Yet that very question becomes less and less interesting the further we progress through the novel. Is Julie really who she says she is? What happened to her? These questions percolate in our minds, but the novel turns them into background elements. The literary fictional portions of the novel that follow Julie’s science fictional tale are instead more focused on Selena and how the story affects her sense of reality. In The Race, Allan mentions Doris Lessing’s Briefing for a Descent into Hell as a reference point, but it is more apropos here, where, as with Lessing, we are presented with a permeable sense of reality. Selena’s choice of deciding on what she considers the truth is more and more foregrounded. Indeed, as we approach the end of the novel, it turns out that Picnic at Hanging Rock was a red herring—the real reference was the story of Martin Guerre, which has been turned into multiple movies and books, but of particular relevance to The Rift is Janet Lewis’s searing novella The Wife of Martin Guerre.

But in contrast to all the tales of Martin Guerre, which are usually stories of guilt, and shame, of cowardice and bravery, Manichean stories of truth and lies, Allan offers her readers science fiction as a tool of freedom. The language and tropes of science fiction enlarge our sense of what’s real. They offer a way to speak of trauma, a speech that may produce a witnessing that escapes the “crisis” that Shoshana Felman and Dori Laub diagnosed in their classic study Testimony. This is additional language that enhances speech, enhances empathy, and allows for other, different, and kinder connections between people. Nina Allan’s vision of what science fiction can do is unique, and if the improvement she offered from The Race to The Rift holds, she may be one of the more important science fiction writers of our time.

Like Loading...
© Copyright 2017 By: Marcel Inhoff
About Marcel Inhoff
Marcel Inhoff is finishing a doctoral dissertation at Bonn University (Germany). His publications include a volume of poetry (Prosopopeia, Editions Mantel, 2015), as well as individually published poems in both English and German. He has written and published essays on Derek Walcott, Thomas Bernhard, Ingo Schulze, Robert Lowell, Tracy K. Smith, and Elizabeth Bishop, and translated fiction into both English and German. His own blog is at shigekuni.wordpress.com
No comments yet. Be the first!