Reviews
Size / / /
The Shape of Water
By: Nandini Ramachandran 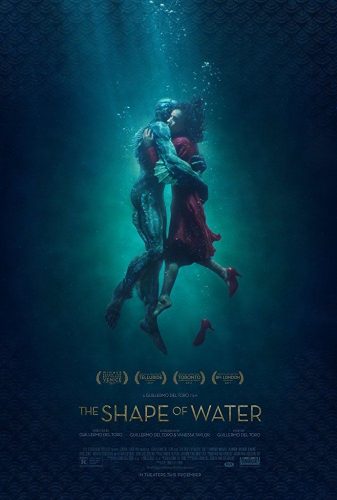 The first time I watched The Shape of Water, I was alone at a midnight screening and it was the week before Christmas. The movie had just released, and all around me were canoodling couples whose happiness I assumed and resented. This is a movie made for lonely people, I thought then; why must everything in New York be colonized by cheer once the season turns; is there nowhere left to be solitary any longer. That this is a bad reading of both the city and the movie is perhaps obvious, but it was only the next time I watched it—on a date, in an empty theater the week before Valentine’s Day—that I realized just how far I had confused silence with solitude and solitude with loneliness. The Shape of Water is a movie about the mysteries and melancholy of kinship, for all that it is a movie structured around silence.

Keeping kin is a perplexing thing. We are all tethered to a world made significant through others, they lend weight and shape and texture to the stories we tell ourselves (and about ourselves) to survive. We choose the kin we keep and we hope to be so chosen in turn; knowing how and whom to love often demands the full measure of a person’s ethical intelligence. Love is the luxury of intimate witness: to grant another person an irreducible importance that no one can ever fully deserve. If this last year has taught us anything, besides, it is that lots of people (most of them men) don’t strive to deserve it; they expect such affectionate rescue from their own irrelevance without cultivating the habits of thought necessary to return a similar solace. What does one do, then, if most men simply don’t know how to stop being entitled monsters? We can, and should, demand they learn, but in the meanwhile, if we can’t stop rescuing men (and I, for one, have found myself incapable of such an austere discipline) how do we choose the monsters we love? How do we acknowledge our own capacity for monstrosity without falling into false equivalence?

I’ve thought about this a lot over the past few months, and it was why The Shape of Water spoke to me so profoundly the first time I watched it. Love the monster that makes you brave, I tweeted back in December, not the one that promises to keep you safe. I chose then to ignore the fact that said bravery (briefly) killed the protagonist, Elisa, until an implausible twist of plot grants her a happier ending. (This is a film committed to a world in which miracles happen, even when they occur despite its own narrative choices.) I concede the folly of that decision—few of us have the benefit of a benevolent script—and yet I continue to make that choice.  It’s also entirely possible, even likely, that I’ve read into the movie a depth that it doesn’t support, but I stopped being capable of critical judgement the moment Elisa insisted when he looks at me he does not know how I am incomplete. With those several caveats, most of them about the perils of cruel optimism, here are my thoughts.

Silence is woven into every layer of the The Shape of Water. The protagonist is mute, an ambitious decision in the context of a culture in which speech anticipates so much of what it means to be human, and also, I think, a necessary one. It is made horribly and repeatedly evident that the villain’s guiding motive is to silence everyone that isn’t him. The biggest betrayal in the movie is by someone who speaks precisely once, and the weight of all that remains unsaid almost sinks the story entirely. We never know, for instance, how it is that a creature that can barely walk for most of the movie suddenly heals itself (and resurrects Elisa!) at the end. This movie builds into a tragedy until this final reversal—it constantly emphasizes that Elisa’s world offers no good choices— and the happy ending is so unearned that I often forget it even happened.

The movie is even silent about who, or what, Elisa’s monster is; it remains unnamed and unnamable. One of the movie’s funniest scenes implies he’s male (or has a penis anyway) but beyond that the movie is clear: this is a creature about which it is impossible for us to know anything beyond the banal and the biological. We can intuit that he feels pain and rage and gratitude, but that no more makes him human than a wounded whale is human; like any fairytale, The Shape of Water expands the possibilities of personhood by provincializing humanity.

When I first watched The Shape of Water, I couldn’t stop thinking about the Angela Carter short story “The Tiger’s Bride,” a retelling of Beauty and the Beast. The story is her second retelling of the fairytale, and a very different affair from the first, “The Courtship of Mr Lyon,” which is about a gentle girl who rescues a noble and isolated beast and initiates him into humanity. “The Tiger’s Bride,” by contrast, is utterly savage; the beast is brutal, while the narrator is, much like Elisa, a very skilled and very paranoid reader of her own society, and entirely aware of the ways in which it conspires to harm and silence her. And yet, as Eve Sedgwick pointed out in her classic essay about paranoid reading, the problem is not that it is wrong to be paranoid but rather that it is insufficient— awareness is not the point of knowledge, action is. It’s only once she gathers her courage, walks into the beast’s lair, and offers herself, “as the key to a peaceable kingdom in which his appetite need not be my extinction” that can she can walk out transformed, a regal and terrifying beast herself.

It doesn’t do to hold the Carter story too closely in one’s mind while watching The Shape of Water; as I discovered the second time around, that way lies only disappointment in the plot’s baffling commitment to its own (thwarted) tragedy. The reason the movie works, however, is because it knows as well as Carter the difference between Elisa’s decision to rescue him and her decision to tentatively offer herself. For a brief flash, halfway through the movie, the monster is allowed the full measure of his monstrosity, and we see the wonder and desire it arouses in Elisa, before he collapses into a pathetic and wounded creature once again. They have sex in a marvelous and funny scene not long after, but that scene, in which they capture one another’s gaze as both aliens and equals for the first and only time, was (to me) the most erotic scene in the entire movie.

The monster might be granted significance in the human world only through human contact, but perhaps the most romantic thing about this very romantic movie is that it resolutely refuses him agency without objectifying him in the process. It is a hard thing—narratively, emotionally—to allow a victim their dignity, and the astonishing thing about The Shape of Water is not the many ways in which it falters in this task, but that it attempts it at all. Partly it does this by emphasizing that everyone in the movie is a victim of their dull and violent little dystopia, which flattens them all into stereotypes (or, more generously, archetypes), and the closing scenes are the most disappointing precisely because the monster suddenly discovers his divinity. And yet, I loved The Shape of Water because it hints at a world in which rescue can be emphatically distinguished from domestication; a world that allows its inhabitants to imagine a wild and reciprocal emancipation.

People tethered to small places, Jamaica Kincaid once wrote, cannot give an exact accounting of themselves, for that would “demand the invention of a silence” from within which such things might be considered, a clear space of fluid contemplation insulated from the oppressive narratives and structures that confine daily life. The people in this movie live, much like the rest of us, in stifling places—and the movie tries to salvage a silence from within which the shape of a transition is made ever-so-slightly visible. It succeeds only for the space of a brief scene—a scene set in a movie theater; this is not a subtle movie—but then silences can only be sustained between very old friends and very young lovers without becoming weapons themselves.