Reviews
Size / / /
The Spirit of Science Fiction by Roberto Bolaño, translated by Natasha Wimmer
By: A. S. Moser 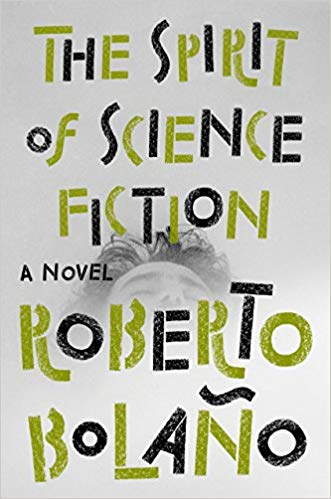 Mexico City, late 1970s: the epicenter of the Hispanic literary renaissance, the 1920s Paris of the western hemisphere, the Harlem of Latin America. Elsewhere, the US-backed Operation Condor was turning South America upside down in a hunt for leftists, intellectuals, freethinkers—anyone who was sympathetic to socialism—further seeding the bed of Mexico City’s artistic flourishing. In literary terms, the setting is ripe for eccentric characters, crossed paths, and high drama. It is here that Roberto Bolaño opens and closes what is frequently cited as his greatest novel, The Savage Detectives. But there was an earlier novel, published posthumously and only recently translated by the inimitable Natasha Wimmer, which also makes use of this turbulent time. The Spirit of Science Fiction is every bit as strange and slippery as Bolaño’s better known works, but while the press release claims this is “a fitting introduction for readers uninitiated into the thrills of Roberto Bolaño’s fiction,” it feels more like a writer still finding his true voice.

There’s a mystique to the work of Roberto Bolaño in the anglophone world. Part of it is due to his remaining undiscovered until just before his untimely death, and his explosive rise onto the literary stage; partly it is due to the picaresque dreamworlds of his narration, the seemingly effortless depth of his created realities, the sense of some monstrous movement just beyond perception. His books are a pleasure/pain amalgam of nostalgia, fear, love, violence, hope, and death. In this early novel, The Spirit of Science Fiction, we meet José Arco—a long-haired, motorcycle-riding bohemian poet, a street brawler who howls like a wolf and perpetually carries a book in his back pocket—who serves as a kind of early cipher for Bolaño’s vision: when we first encounter José Arco, he is late to a literary gathering of mediocre poets who are simultaneously awed by and resentful of his presence, and recites a poem titled “Eros and Thanatos.”

For Bolaño, love and death are intrinsically linked in ways that can be sublime or tawdry, transcendent or corrupted, as readers of his masterpieces The Savage Detectives and 2666 will instantly recognize. That kind of disruptive presence and insouciant cutting to the heart is something Bolaño himself aspired to as a young and penniless poet in Mexico City (much like Remo, the sometime poet and journalist in this novel, and García Madero in The Savage Detectives, the young Bolaño joined poetry workshops in 1970s Mexico City and was part of a semi-secretive, avant-garde movement—unnamed in this novel, appearing allegorically in Detectives as “visceral realism,” and called “infrarrealismo” in Bolaño’s youth). This is not to suggest The Spirit of Science Fiction is autobiographical, or that José Arco is a stand-in for the author; if anything, a more obvious choice for that role would be seventeen-year-old Jan, who writes fan letters to American science fiction authors, and who signs his final letter “Jan Schrella, alias Roberto Bolaño” (p. 178). But this is one of Bolaño’s many tricks, a little aha for readers which serves simultaneously as Easter egg and red herring.

I read our male protagonists as aspects of a higher Bolañian ideal: we have Jan, who locks himself into his rooftop room to write, hiding manuscript pages under his mattress when Remo brings over visitors—the artist as hermit; then there’s Remo, who rarely writes, choosing instead to explore the physical dimensions of Mexico City and himself—the artist as experiencer; and finally our catalyzing side character, José Arco, a warrior poet who has managed to unite the creative and physical sides that Jan and Remo come to represent. An overly simplistic shorthand might depict them as mind, body, and soul. It’s no oversight that the third thread of the interwoven narrative, a rambling interview happening at some vague point in the future, is never clearly tied to Jan or Remo. The easy assumption is Jan—he has the manuscript pages, he has the sci-fi dreams, he puts in the writing hours—but at least one reviewer has assumed it to be Remo[1], and the novel ends with a trance-like “manifesto” as Remo explores love and lovemaking in a series of bathhouses in what may be seen as an apotheosis of his physical and emotional journeys. There’s a sense that he’s undergone a dramatic change, even as the phantasmagoria of the bathhouses makes that change only dimly understood.

Both Jan and Remo come to embody characteristics of the other; while their depth as characters and the degree of change they undergo may be subtle, they’re deftly transcribed. So, too, is the city itself vivified and quickened: it opens up Jan’s mind as he hides from its denizens yet marches up and down its boulevards like a soldier and sees the colors of tanks in his building’s paint; and it opens up Remo emotionally, as he comes to experience and feel the things—freedom, conviviality, joy, love—that he’s only written of (and, implicitly, did not have in the Chile of Pinochet from which he and Jan escaped).  This is not to say that Mexico City is utopian; Bolaño delivers his pathos in contrasts, the joy growing from the sadness like a lotus from muddy water. Remo’s first exultant rush riding his stolen motorcycle through the city at dawn is undercut by the danger and fear of not knowing how to operate a motorcycle, and the city itself echoes back this mélange of emotion:

The geometric landscape of the neighborhoods, even the colors, had a provisional look, filigreed and full of energy, and if you sharpened your gaze and a certain latent madness, you could feel sadness in the form of flying sparks … Not a melancholy sadness but a devastating, paradoxical sadness that cried out for life, radiant life, wherever it might be. (p. 161)

At another time, reminiscent of Nick Carraway, Remo gazes out the window at the city surrounding them:

[I]t was a clear night, and the lights in the other apartments hinted at parties five meters above our heads, leisurely conversations five meters below our feet, maybe a couple of old men listening to classical music fifteen meters in a straight line from our ribs … I was happy. It didn’t seem very late, but even if every light went out and all that was left was me and the glow of my cigarette suspended on the wonderful balcony, this particular beauty or terrible fleeting calm wouldn’t melt away. (p. 85)

The city holds such life and promise in these moments, yet also a dread of their ephemerality, that “terrible fleeting calm” which even as it appears reminds one it will soon be blown away.

And then, as if Bolaño feels in danger of not stirring in enough conflicting emotions, he adds, “The moon seemed to creak over reality” (p. 85). One can see here why Bolaño is often compared to Haruki Murakami—his reality is not entirely stable, as if there are layers of realities cohabiting the same space, which frequently confers on his narrative an aura of shamanic surrealism. Or, to use Bolaño’s own word from his youth, infrarealism, operating just below the level of reality. And the author is aware of this: at one point, he has Jan and Remo discuss Gene Wolfe’s “Silhouette,” a story which symbolically explores identity and becoming by playing around with reality and sense of self, and Jan replies, “It’s not that it was such a strange book, but I got the idea that the author was hiding something …” (p. 41). One gets that idea here, too—not that Bolaño is dishonest, but that he is having fun and inviting readers to play his game with him. If that game is not quite so all-encompassing as in 2666 or wrenching and consuming as in The Savage Detectives, it is still a delight to be back in the potent mystery of Bolaño’s world.

The people we meet contain this shambling glory, too, from a pair of sex-show boys and their pimp, who creep into Remo and his girlfriend Laura’s steam room, to the Chinese-Mexican coffee shop owner who opens and closes his shop at wildly eccentric hours—but it is perhaps best illustrated by the smiles of two women. Early in the book, shortly after moving to their rooftop room, Remo goes out onto the street and shouts up to Jan, who hangs from a window to shout back—a common cinematic trope of happiness, but Bolaño does not rest on a single, unambiguous feeling: a passing woman smiles, and Remo thinks:

I believed that nothing bad would ever happen to us in that welcoming city. How near and how far from what fate had in store for me! How sad and transparent that first Mexican smile appears now in memory! (p. 14)

Later, a reflective narrator-Remo interrupts his story of a party to comment:

[T]here are things that I remember vividly—books, records (the shiny black objects themselves, I mean, not the music), and, especially, Lola Torrente … . To me, her smile is still the terminal smile of that other Mexico, a place sometimes revealed between the folds of a random dawn: part rabid will to live, part sacrifice stone. (p. 79)

It is these last two descriptors—“part rabid will to live, part sacrifice stone”—that stuck with me throughout the remainder of the novel. If, by juxtaposing Jan and Remo, the text is asking which is the proper path to achieve literary greatness, by never quite clarifying which has become successful in the future sections and by ending with the “Mexican Manifesto” of fear/love/confusion/longing/hope/sadness in the bathhouses, Bolaño may be indicating he’s already answered the question in the first third of the book: being in the world and removing yourself from the world are both valid, but only proximate causes; what is needed is a kind of self-sacrificing madness, the rabid desire and the willingness to become the tool on which the blood is spilled.

I do not recommend this book as a first introduction to the work of Roberto Bolaño. It’s recognizably Bolañian, from the themes to the characters to the experimental narrative approach, but it’s not peak Bolaño: it is strange enough to be mesmerizing to fans and confusing to the uninitiated, but not quite filled with the magnetic power of his later works. Start with the obvious Savage Detectives, or, as I did, with the brief, wonderfully weird novella By Night in Chile, and end of course, as Bolaño himself did, with 2666. In between, The Spirit of Science Fiction is a delightful accompaniment to the author’s oeuvre, and an earnest exploration of what it is to be a young writer trying to find your way, your voice, and yourself.