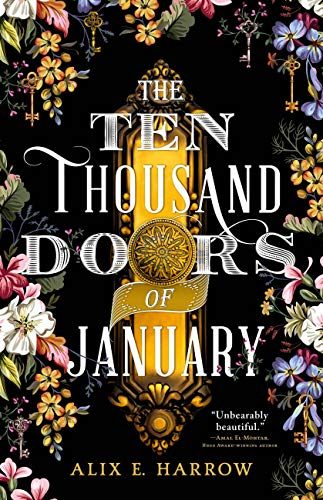 Alix Harrow won a Hugo last year for her short story, “A Witch’s Guide to Escape: A Practical Compendium of Portal Fantasies,” published in Apex. The piece is lovely and desperately sad, about the allure of libraries, the wisdom of librarians, and the books that can rescue broken people. Its protagonist, who also happens to be a witch (as many librarians of course are), has the magical ability to understand what book each child needs (again, as many librarians do). When a kid with an obvious need for escape from a desperate situation begins visiting her library, the librarian knows what to feed him. She keeps his spirit alive with classics like Le Guin’s A Wizard of Earthsea and others that I’m not sure are made up or real.

In the story, the boy’s need is too great for this to suffice; it’s not enough to metaphorically escape into books. So the witch-librarian breaks the rules and gives him the book he really needs: one of the hidden, magical books that are locked away somewhere in every library—in this case, the eponymous volume that lets him leave this reality for a better one.

Tropes like these are foundational to the joy of fantasy literature: a love of books, the desire to use them to venture into other worlds, the idea that a book could be an actual, physical escape from this world. It might be a bit circular or self-referential to write a story about the power of stories; but that doesn’t mean it’s not also great. The tropes are also true and, when handled as expertly as Harrow handles them, they work. “A Witch’s Guide to Escape,” and its Hugo win, reminded us that these themes don’t have to be trite and that fantasy can still be hopeful. Harrow’s debut novel, The Ten Thousand Doors of January, has gone further, expanding those themes and creating a love letter to the idea of books as doorways into other worlds.

Sometimes I feel there are doors lurking in the creases of every sentence, with periods for knobs and verbs for hinges. (p. 6)

What struck me about Ten Thousand Doors is that Harrow didn’t have to reinvent these familiar ideas to make them seem new. Magical doors to other worlds are a staple in fantasy. So is the idea of books as another kind of door. So is the idea of a book within a book. But Harrow doesn’t need to stand these ideas on their heads or weave them into a gritty, modernist fable to make them work. She simply loves them and writes that love into the story, spinning the tropes into a tale built on that love. It works beautifully.

Ten Thousand Doors centers on one January Scaller, a girl of color—though a color not quite of this world—who is being raised as the near-ward of a wealthy, landed gentleman and father of industry, Mr. Locke, in the Vermont countryside in the first decades of the nineteenth century. We learn early on that January’s mother died in a mysterious accident when she was an infant, and that her father scours the world searching for treasures for Locke and his colleagues in the New England Archeological Society. January is wistful about a father who’s never present and chafes against Locke’s gentle but misguided attempts to mold her into a proper society lady.

On one especially frustrating day in Locke House (there’s a pun in that name related to doors that I only caught just now), January finds what seems to be a book written by a scholar from another world about Doors (always capitalized) between worlds. January has already had one run-in with a Door in an apparently random wheat field in Kentucky when she was much younger. Until finding the book, familiarly entitled The Ten Thousand Doors, she had half-convinced herself that the Door was a dream. But when her father disappears in Japan and is presumed dead, January reacts to her grief and Locke’s paternal control by escaping into the book.

Of course, January thinks this escape will be the normal way of books, but you can see how the layers come fast and thick: we’re reading a book that contains a book about Doors into other worlds and is providing a character with the same kind of escape Harrow’s book might provide a lonely young person that wanders into a library much like the one in—keep up!—“A Witch’s Guide to Escape.” As January reads (and we read her reading), she slowly learns the truth about her family and discovers the possibility of not only regaining her father but her mother too.

The first half of the book is a bit tricky because it alternates between January’s perspective, as she pushes against Locke’s authority, and chapters of the book she’s reading. These alternating narratives make the novel slow to develop a sense of urgency, but Harrow handles the balance dexterously. The scholarly tone of the inner-Ten Thousand Doors quickly falls away, becoming the story of another girl, named Ade, who finds a Door, falls in love with a boy on the other side of it, and devotes her life to trying to get back to him and his world after the Door is destroyed.

The two narratives, Ade’s and January’s, come closer together until, by the time the book-within-a-book structure falls away, things have been tied up tightly enough to make it worth the extra work of keeping up with two separate narratives throughout a little more than half of the book. Spoiler alert: Ade, it turns out, is January’s mother, and the boy, Yule Ian Scholar, or Julian Scaller, her father and the book’s author. The whole book has been a message to January, a message explaining where she came from and giving her the knowledge she needs to get back there.

This narrative structure allows Harrow to do something rather remarkable: because the book-within-the-book features January’s mother, Ade, as its protagonist, and is written by her father, we learn who both are as characters even though January’s father is off-stage for much of the novel—and despite the fact that she doesn’t meet her mother until the story’s conclusion. Harrow thus manages to create a novel in which the hero is not simply the main character but rather—in a very genuine, natural, and unassuming way—the entire family.

I happen to believe every story is a love story if you catch it at the right moment, slantwise in the light of dusk. (p. 33)

The relationship that Harrow builds between these three characters points to something central to her writing: love is the engine that drives this story. Not just love between January and her mother and father. Not even simply a love for books and words (though that’s there throughout and continually leaps off the page). This book is about a love of freedom and open Doors (never portals or rifts or chasms).

The villains in this novel are those who, like Locke and his companions, are not only interested in controlling people or money or property for their own gain. As January learns more about Locke’s society, she realizes they are dedicated to cutting our world off from all others, to closing the Doors permanently. In particular, the revelation that Locke has been using January’s father not to simply find treasures and tokens through Doors but that he has been manipulating Julian—following January’s father and destroying the Doors behind him even as Julian was searching for a way back home to his wife—is powerful. It all comes nicely full circle at the novel’s conclusion as January confronts Locke in that same Kentucky field where she found her first Door as a child.

Locke’s centrality to the tale’s resolution, however, was why his characterization was the one thing I was really disappointed about in the novel. January’s relationship with Locke, who arguably played a larger role in her life than her absent father, is the primary source of conflict in the novel. Locke was an overbearing but apparently compassionate surrogate father who January spent her childhood trying to please. Her decision to defy him sets the trajectory of the novel. Yet she still feels loyal to him, and even when he has her committed to an asylum “for her own good” she still makes excuses for his behavior—just as someone who had long been controlled by a manipulative paternal figure would.

The portrayal of Locke as one of the rising millionaires of young industrial America, obsessed with keeping the universe contained and ordered—just as he tries to do the same with January—makes him a compelling villain. But the final twist—that Locke himself is an ancient creature from the other side of a Door, with the power to twist the wills of those around him—weakened the dynamic between him and January. Somehow an actual human doing the things he had done made them much more sinister. Being unmasked as a Bad Guy from Beyond made him feel a more one-dimensional character—and made January’s resistance feel more scripted.

Besides this minor flaw though, January herself was an expertly developed character, and the Doors allowed Harrow to make her even more compelling. Throughout much of the novel January is a woman trying to figure out how she will survive without power or influence, without a father or a mother, if she leaves Locke’s protection. But she’s also a social outsider in another sense. As she eventually learns, not only is her father from another world … but she was born there. And because of her heritage, January’s skin color, which is described as a coppery red, is emphatically not white in a world that can only see two colors. This allows Harrow to emphasize January’s perspective as someone who never quite fits—and offers a strong motivation for her quest for home, not just a quest for escape from this world.

Ten Thousand Doors, despite the scholarly monograph embedded within it (complete with footnotes), doesn’t explain the Doors. It doesn’t need to. We learn that they happen now and again (probably more than we realize) in places where the connected worlds have a particular “resonance.” We also learn that certain people in different worlds have particular powers, like Locke. One of Locke’s cronies, for instance, is a vampiric creature that can drain the heat from bodies, who wandered into our world centuries ago. On the world of January’s birth, meanwhile, some have the power to twist reality with their words alone. We don’t learn why, though we do learn January is one of them.

And so is Harrow. Time and again throughout the novel, the words that strike with the most beauty are the words that seem to clearly be coming from beyond January. At twenty-nine and with her own growing family, Harrow is the youngest woman to have won a Hugo in a prose category. The love she’s put between her characters in this book rings true, because—as she makes clear in the acknowledgements—she’s drawing on personal springs to water these fictional relationships. “I stumbled over something grand and strange,” January says when finds her first Door, “something that rips a hole in the shape of the world. I wrote something and it was true” (p. 19). It’s January talking, but I think the awe and the surprise here, the thrill to be able to say this truthfully, are Harrow’s—and I think she’s right to say it.

Like Loading...
© Copyright 2020 By: Stephen Case
About Stephen Case
Stephen holds a PhD in the history and philosophy of science and teaches at a liberal arts college in Illinois. His fiction has appeared in Beneath Ceaseless Skies, Orson Scott Card’s Intergalactic Medicine Show, Shimmer, and Daily Science Fiction. His first novel, First Fleet, is a Lovecraftian SF epic available from Axiomatic Publishing. Find him online at www.stephenrcase.com.
No comments yet. Be the first!