Reviews
Size / / /
The Test by Sylvain Neuvel
By: Mark Granger 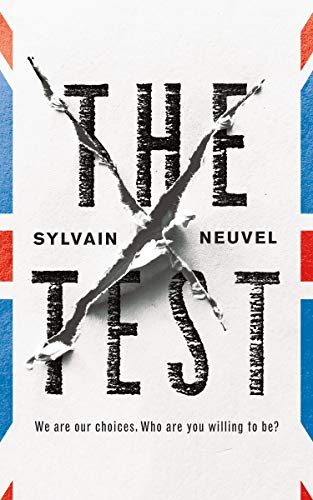 My review copy of The Test traveled painfully slowly from America to my home in England, so when I received it, I had forgotten everything about it. This turned out to be a good thing, because going in cold made the story that much better. As such, if you want the same experience from this book, I'll just go so far as to tell you that this is a riveting, thrilling, and sometimes chilling story … and warn you not to read any further if you don't want spoilers.

The rest of us can join the story's protagonist, Idir Jalil, as he starts the titular test. It is a citizenship test, and Idir is excited to get it done. He and his family have lived in the UK for quite a few years already, long enough that his eldest son doesn't remember life before they moved there. From the very start, it is clear that Idir is a family man and that's why it's so important for him to secure the right to remain in the UK; however, no sooner has he started question five than a group of men with guns charge into the building and take everyone hostage.

Everyone gets down except for one man, who gets a bullet to the leg for his trouble—and Idir, being a kind soul, can't help but go and apply a makeshift tourniquet. This angers the captors' leader, and he singles out Idir for a task nobody wants.

“—The police, the government, they … need motivation to do things, so … I provided some. I told them I would kill one person every fifteen minutes if they don't do what I asked them to do … Anyway, here are the rules. Every fifteen minutes I pick two people and you tell me which one to kill. I kill that person. Simple enough!” (pp. 32-34)

At first, Idir refuses, but soon resigns himself to the fact that he has to do it or more people will die.

But not everything is as it seems. This is actually all part of the test, the British Values Assessment. Idir is sedated and in a simulation controlled by assessors. Every subject not only has to answer a series of questions in the simulation, but is assessed on every decision they make from the moment they enter the simulated test area, from how they react to sexist jokes to whether they decide to recycle. The story is set in the near future, not long after some event that involved bombs—an event that is only referred to once and in passing. Now, the citizenship test is stricter than ever, and if participants fail they find themselves on a plane and out of the country with no memory of how they got there.

Neuvel handles the subject with care. A story dealing with immigration, especially in today's political landscape, was always going to need to be touched upon delicately. The fact that Neuvel is a middle-aged white dude makes it all the more important that his portrayal of the mild-mannered Iranian at the heart of his story—and of Deep, the conscientious assessor who is working on Idir's case—doesn't come across as stereotypical. In fact, the only stumbling blocks in the writing are minor at best, and these come at points where the language used (trash, garbage) is American/Canadian-centric, which as a Brit is quite jarring when reading a story told mainly in the first person by somebody (Idir) who supposedly lives in the UK and has done for a while. But if I'm nitpicking to that extent, you can see that the rest of the book is pretty darn good.

Neuvel keeps the tension high throughout, in the simulation and even in the assessor's control room. Deep realizes what power over the participants’ futures he holds if he messes up his job. He doesn't want Idir to be deported; he knows he's lucky to have his job and that it could easily have been him in that simulation.

Deep's father never took the test. He was naturalized six months before the bombs went off, a whole year before the first simulation ... had his family arrived a year later, Deep knows he would have been born elsewhere. (pp. 47-49)

Because of this, everything that Deep does is loaded with tension, as he wants to do right by Idir. He can tell Idir is a decent person and doesn't want him to be deported on a technicality. Deep's thought processes alone, then, are enough to set you on edge.

Not all is high-octane excitement, however. The entire story is set in two locations. The assessment room Idir believes he is in and the assessment room that Deep is in. So it is to Neuvel's credit that he can keep the action moving. Sometimes there are little dips: for example, when Deep is agonizing over his decisions the text can go a little too far into exposition mode, dropping in little facts about the psychology of the situation:

[Deep] found comfort in knowing that humans … come with a lot of the same baggage of innate and learned little quirks.

System justification is the idea that many of our needs can be satisfied by satisfying and defending the status quo. It gives stability to our political and economic systems … [p. 42]

And blah, blah, blah. All very interesting, all essential to the overall narrative but, unfortunately, way too boring for a story like this. And it happens again throughout the novel, as Neuvel explores the deeper reasons behind who we are and how the government might use psychology to divide us. It's only because the characters of Idir and Deep are so strong—that you truly care what happens to them as they both try to do the right thing, and that both come to some very depressing conclusions—that the duller aspects of the story can be given a pass. You forget about them as you move on to the next piece of action.

That being said, the boring parts here are few and far between, and The Test is short and to the point. It doesn't stretch the central idea beyond its limits, and yet doesn't leave you wanting more. The thing it does leave you with is a fear for the future—and a feeling of being emotionally drained. And that, I think, is what Neuvel was going for.

Like Loading...
© Copyright 2019 By: Mark Granger
About Mark Granger
Mark Granger is trying to be a writer. His work has been used on BBC Radio 4 Extra and his short stories have been shortlisted in several competitions. His work can be found at mark-granger.tumblr.com. Although he barely updates it nowadays. One day he’ll get a proper website and stop referring to himself in the third person.
No comments yet. Be the first!