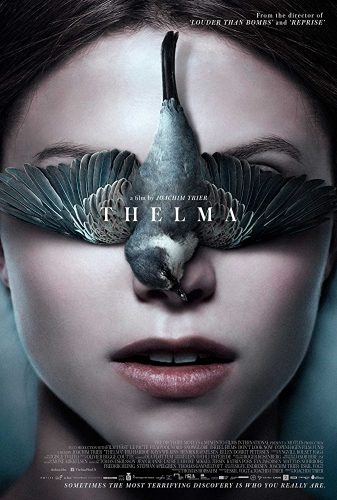 Thelma is a story about a magical girl. There have been many such stories throughout history. Generally, these stories end in the magical girl being burned at the stake, or in the case of Sabrina the Teenage Witch, made to endure the torture of performing hijinks in front of a live studio audience. It is rare to encounter a story with a magical girl which does not do one of four things: 1. Sanctify her. 2. Demonize her. 3. Kill her. 4. All of the above.

Thelma is a rare sort of story.

We begin in the deep Norwegian winter. We’re out hunting with a father and his daughter. The world is a forest dressed in shadow and snow. The girl is perhaps seven years old. She wears an abundance of pink. This, we presume, is Thelma. A deer appears. Thelma takes a step forward. She is fascinated. The father takes a step back, scared. He takes aim not at the deer, but at the head of his daughter. He can’t bring himself to kill her, but you get the sense that he can’t let her live either.

We encounter Thelma (Eili Harboe) next as a young woman, sitting in a college library, all quiet and studious and far away from the wilderness of her childhood. A tall woman strides into frame and sits next to Thelma. This is Anja (Kaya Wilkins). The two women share a smile. It’s a knockout. Literally. Thelma falls on the floor, her body possessed by a power seemingly beyond her control. A crow smashes into the window. And then another. And another. Joachim Trier succeeds here, and throughout Thelma, in creating an atmosphere of mystery, desire, and menace.

Some have compared Thelma to The Omen and Carrie. It makes a kind of sense. Like those films, Thelma contains, to varying degrees, creepy children, witchcraft, and revenge. Unlike those films, though, Thelma interests itself less with imaginary demons and generic misogyny, and focuses instead on the specific terrors embodied in systems of control such as those we encounter in our religions and in our parents. It’s particularly interested in how that terror gets disproportionately aimed at the power and agency of women. In this, along with its queerness and sensuality, it reminded me much less of the stories of Stephen King and much more of the “cognitive dysphoria”[1] found in the stories of Carmen Maria Machado. As in Machado’s stories, the horrors of Thelma, for the most part, reside in both the specific and systemic attempts to shame and control women as well as the unfortunate and not uncommon tendency of treating any kind of resistance to such attempts at shame and control as evidence of one kind of fit or another.

Despite the minor, if unsettling, setback of unexpected seizures, Thelma hangs out with Anja and her friends in bars and diners and clubs. They smoke and drink, but Thelma doesn’t. “Why not?” they ask. “I’m a Christian,” Thelma says, as if this explains everything. It’s clear that Thelma wants to be more than friends with Anja, and that Anja wants the same. It’s also clear that Thelma doesn’t know what to do with this knowledge. It seems against her Christian upbringing. Also, she keeps having those seizures. At a concert hall, Anja puts her hand on Thelma’s knee and then slides it up her thigh. Thelma trembles with desire. Above them, a giant ceiling ornament sways and sways and sways. Thelma struggles to maintain control. She bolts from her seat. Later, she calls her father. He seems concerned, but supportive, which considering the last time we saw him, seems like a marked improvement.

At one point not so long ago in history, there used to be this thing wherein people thought that seizures indicated the presence of demons and/or the devil. That you were not, in some way, right with God. It is probably still a thing in some places, and in some forms of religion. Thelma reads all about this on the internet while trying to understand her seizures. This is the problem with the internet. You can find whatever you want. Thelma already sees herself as, in some way, powerfully wicked, and, so, she encounters images of witches and stakes and fire and Joan of Arc. Later, at a party, she has a vision of making love to a woman while a snake curls around her throat and enters her mouth, headfirst. While much of this film is understated, it is rarely subtle.

There’s a long shot and long take, early in the film, in which Trier positions the camera above the campus and leaves us there, for a not small amount of time, looking down at the world. This shot does a few things. One, it pulls at our collective cinematic unconscious. It echoes shots from films, such as the aforementioned The Omen, which seek to implant the idea of some dark power at work in the world. Two, it centers us in a particular kind of (generally) male gaze—the one from on high which believes it knows best, perhaps due to its ownership of a direct relationship with God or a penis (who can say, really). Some would call this a god’s-eye view. Others might simply describe it as vertiginous. Either way, we are uncertain of our vantage point—not least because for most of this extended shot we don’t really know at what we are meant to be looking. And this is to Trier’s purposes. He is inviting us to question the tenuousness of adopting such a gaze, of affording oneself such a position of power. It is only very late, in a very slow zoom down into the world, that we at last discover and settle on Thelma—the weight of the world, and our gaze, coming to rest on her shoulders.

Thelma has internalized this gaze, of course. That’s how these things work. That’s what makes things so hard. She feels these desires, and she feels this burgeoning power—to control crows and ceiling ornaments and, perhaps, even people—and she doesn’t know what any of it means. She only knows that there must be something wrong with her. She has no sense of the true nature of her enemy because such truths have been buried deep within the shadows of her heart. As a doctor tells her, and as all students of fairy tales such as this know, things are rarely as they appear to be. What appears to be a delicious apple might, in fact, contain the knowledge of good and evil. What appears to be epilepsy might be a symptom of something else, “a physical reaction to mental suppression.” What appears to be a sin might only be the possibility of happiness.

Halfway through the film, we learn the true nature of Thelma’s power, and it is terrifying. Trier, unlike Thelma’s father, does not lie to us. This is not a film that pretends that power is good in itself. It is not impossible to understand how her parents made the choices they did. Nor is it possible to entirely forgive them for those choices. While the film isn’t interested in making the father into a bad guy, it is interested in helping us see how his choices fit into a pattern of male cowardice, of teaching girls to diminish themselves by lying to them, and hiding from them the true nature of their powers.

Men, for the most part, I think, are raised to believe that it is not only their right, but their heroic duty, to shape the world to their desires. We often question in stories the consequences of this belief, but we rarely question the belief itself. The joy of Thelma is to grant such magic to a woman—to allow her the power to literally shape the world according to her desire—and then to chart the evolution of her relationship to that power without bothering one way or another to say if this power is good or bad. Such questions, for this film, are beside the point.

In many ways, Thelma is a shameless film. It is shameless in its use of horror and religious iconography. It is shameless in its depiction of sex and desire, both its wonders and its terrors. This is not a film that imagines Thelma’s magic to be anything so simple as a blessing or a curse. Thelma, here, is neither a victim nor a hero. There are no bad guys in this film, after all. There are only bad choices. The film leads Thelma toward a truth, and so a world, in which better choices might be made. A world in which her desires might exist without denial or shame. Late in the film, after a violent confrontation with her father, Thelma coughs up a crow, its body curled tight into a little black ball. It appears broken. Perhaps dead. But, after a moment or two, the creature unfurls and takes flight. Thelma smiles. She can hardly believe her own power.

[1]In a review titled “Her Body, Her Self: Carmen Maria Machado’s Her Body and Other Parties,” Leah Schnelbach digs into the vital, and often terryingly fragile, realities that Machado conjures across her collection. [return]

Like Loading...
© Copyright 2018 By: Chris Kammerud
About Chris Kammerud
Chris Kammerud’s fiction and nonfiction has appeared in Bourbon Penn, Phantom Drift, Interfictions, and multiple times in Strange Horizons. He produces and co-hosts the short story discussion podcast Storyological. He is a graduate of the Clarion Science Fiction and Fantasy Writers’ Workshop, and he holds an MFA from the University of Mississippi, where he studied as a Grisham Fellow. He lives in London with his partner. You can find him online at @cuvols or www.chriskammerud.com.
No comments yet. Be the first!