Reviews
Size / / /
To Shape The Dark edited by Athena Andreadis
By: Kelly Jennings 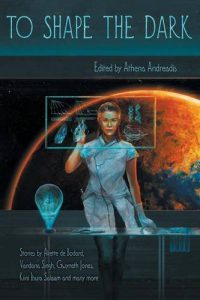 By now we’ve all heard of the Bechdel-Wallace test. We’ve read the studies and seen the reports. We know that science fiction, even science fiction written by women, suffers from a paucity of women characters, and specifically of women protagonists. While not limited to one genre, the dearth of stories which treat women as real people in their own right seems especially egregious in the field of science fiction, given that we’re a genre committed to looking to the future. A regressive science fiction, in which women appear only as adjuncts to men, or don’t appear at all, paints a dismaying future. Worse, it’s not an accurate painting—not accurate about our present world, much less the future we hope for.

As a partial response to this situation, in 2013 Athena Andreadis, along with Kay Holt, released the science fiction anthology The Other Half of the Sky, filled with stories featuring women protagonists. For this anthology, Andreadis solicited science fiction stories about women who were fully grown, fully human, and the center of their own narratives. The anthology ended up on a number of recommendation lists, garnered stellar reviews, and saw four of its stories reprinted in Best of SF anthologies that year. Further, one of the stories, Aliette de Bodard’s “The Waiting Stars,” won a Nebula. With To Shape the Dark, the successor to The Other Half of the Sky, Andreadis has not just created a worthy successor to her first anthology: she has surpassed it.

This second anthology continues Andreadis’s project to publish more science fiction with women protagonists. In this anthology, as she explains in her introduction, Andreadis adds an emphasis on the science part of science fiction. Just as many of us have noticed the dearth of women in the genre, many have also noticed the lack of stories with real science at their centers, not to mention of real scientists doing that real science. For To Shape the Dark, Andreadis sought out stories about women scientists who were “passionately pursuing their science” (p. 4). Though the stories are amazing, I recommend not skipping the introduction—or at least coming back to it. Here, Andreadis, herself a scientist, succinctly lays out her argument for the anthology. As she notes, much of modern science fiction has a US perspective, so that US attitudes toward science (and towards gender ) tend to prevail in the genre. Currently in the genre both science and scientists tend to appear as villains; the scientists are men, and the science is brought into the story—if it appears at all—as an info dump, rather than as a practice and an art which humans engaged in. This sort of science fiction becomes a puzzle story, a trick, rather than a fully fledged story.

Here in To Shape the Dark, Andreadis gives us fifteen stories in which both women and science—real science—are the heroes. I seldom read an anthology with more than one or two really good stories in it; usually at least a quarter of the stories are meh. Here, every single one is not just good, but stellar. This makes my task difficult, since I have to select only a few to talk about. You may take it as read that what I really want to do at this point is put the book in your hands and say, Go read, they’re all wonderful.

Aliette de Bodard gives us a story rich with court intrigue covering years and multiple planets. In “Crossing the Midday Gate,” a scientist, Dan Lihn, has been exiled for twenty years to a provincial planet. Her exile, as we learn, had to do as much with politics as with an ill-fated decision concerning a vaccine developed in her labs. Although Lihn might not have been responsible for the problems with the vaccine—it worked, but it had fatal side effects for some people—she kept quiet and accepted responsibility in order to protect a subordinate less politically connected than she was. Now, recalled to court—more because of her value as a political prop than for reasons of justice—Lihn must decide between reclaiming her old position, and with it the chance to once again be an effective scientist, and once again protecting that subordinate.

And from Gwyneth Jones comes “The Seventh Gamer,” a story about an anthropologist studying the culture of an online game. This anthropologist, Chloe, is drawn to study a particular game after learning of a rumor that one of the NPC in the game is an alien. Chloe doesn’t believe that this NPC, Pevay, is actually an alien; she immerses herself in the culture of the game in order to study the system that created this belief. However, once she’s in the culture, and dealing with Pevay, she finds her certainty beginning to slip.

“Fieldwork,” by Shariann Lewitt, less traditionally plotted than most science fiction stories, was for me one of the most gripping in the collection. It’s the story of Anna Taylor, a third-generation scientist. She’s a volcanologist whose grandmother died on the first expedition to Europa. Her mother, Irene Taylor, was one of the children on that expedition. The First Europa Expedition ended in disaster, and Irene, despite her young age, saved the survivors, due to her extraordinary mathematical ability. “Fieldwork” concerns, among other things, Anna’s decision to accept a mission to return to Europa, and the impact this has on her mother. It is told in flashbacks and journal entries—Irene’s journal, which she gives to Anna as she leaves for the mission. It is a story, ultimately, about the cost of doing science; and about the fact that science is, ultimately, worth that cost.

Melissa Scott gives us “Firstborn, Lastborn,” an almost too-short story of a class-stratified far-future world. In this future, the “First-born,” the original space-faring settlers of new worlds, own almost everything. Second-born, those who followed them into space, and “facendi,” those created—literally built—to do the more dangerous work of terraforming the planets, own little and have almost no power. The First-born also control, and to some extent own, the powerful AIs they created to run their civilization. Here in this story, one of these First-born, Anketil, is confronted by the rediscovery of a rebel AI, long since lost—deliberately lost, stranded, in an attempt to stop the coming AI war. Anketil has a family connection both to the rebel AI, Gold Shining Bone, and to the humans in the ship that it controlled—all lost when Gold Shining Bone was left stranded outside time and space. Anketil can rescue Gold Shining Bone and the crew of the ship, but knows that if she does, she may yet cause the AI war. All of this story is told, not from Anketil’s point of view, but from the point of view of a narrator who tells us up front that they are not First-Born, not Second-born, and not facendi, but something entirely other. How other, we don’t understand until the end of the story—which causes the reader to reevaluate everything they’ve read.

Constance Cooper’s “Carnivores of Can’t-Go-Home” is another of my favorites in the collection, along with “Chlorophyll Is Thicker Than Water,” by M. Fenn. They are both about plant biologists, but I don’t think that’s the source of my enjoyment—plant biology is not my favorite sort of science. (It’s not even in the top ten, frankly.) Part of what I like about Cooper's story is the world-building. She starts with a great premise: aliens, or some entity, have removed two entire continents of humans from Mother Earth and placed them on this alien planet, Daughter Earth. That’s all backstory: she moves on from there—this story is set about a hundred years after that event. On the other hand, Fenn’s story is set on our Earth, only a few years in our future. Its world is our world, depressing anti-science, global warming denialist, corporate dirty tricks and all. So it’s not the world-building, or not world-building only, that draws me to these stories. Partly it’s the main character and their relationships—in both stories, we have two main characters, both women, both in long-standing relationships, although of different sorts. In Cooper’s story, the relationship is that of colleagues; in Fenn’s, the women are married. But in both cases, the two women know each other, understand each other, and work seamlessly together. This, women working together, is something I know well from my own experience, and something I almost never see reflected in science fiction.

And partly it’s the sheer pleasure, in both cases, that these women take in their science. As Andreadis notes in her introduction, this was one of her goals: scientists, enmeshed in kinship groups, passionately engaged in science. Here, in these stories, we see delightful examples of that.

In Cooper’s story, the two scientists set out to chart the plants in a thus-far uncharted bog on Daughter Earth, and end up in the middle of local politics. As becomes apparent, this is a situation which could lead to disaster, not just for them and the bog, but for all humans on the planet. In Fenn’s story, the scientists (who are in their eighties, by the way; another detail about this anthology that I love is how many of the main characters are well past middle age), while apparently doing nothing more exciting than running a hill farm in Vermont, turn out to be doing very important science indeed, as a corporate spy sent to investigate their work finds out.

I’ll close with Vandana Singh’s story, “Of Wind and Fire.” This is the story I would most like to see made into a novel. Here’s some world-building. Singh gives us a world filled with floating townships and a giant mountain they “fall” along and around, endlessly, with cliff settlements where they can, from time to time, make anchor, and leave or take on passengers.

And while the main character, Vayusha, does not at first glance seem like a scientist, we soon realize she is the primal scientist, studying her world through observation, trial and error, the gathering of data, and the application of that data. This world is not our world, and the laws of physics here aren’t ours. It is through Vayusha’s scientific observations that we begin to understand the laws of this world—how its gravity works, how it is shaped—and to form our own hypotheses about what is happening. (Singh never gives us answers: the reader, like Vayusha, is on her own.) Along with the fantastic world-building, we have a page-turning plot—people sometimes fall from the floating towns. This especially happens to children, and one day it happens to Vayusha’s tiny daughter. Usually such children are given up for dead, but Vayusha knows that (in this world) light objects fall more slowly than heavy ones. She knows she can catch up with her child, and she dives after her. Vayusha’s travels as she falls, and once she lands (and, spoilers, finds her daughter), just end too soon.

I could well go on, singing you paeans to every story in the collection; but I’ll leave you some to discover on your own. This is, like Andreadis’s previous anthology, a remarkable collection, and one not to be missed.

Like Loading...
© Copyright 2016 By: Kelly Jennings
About Kelly Jennings
Kelly Jennings has published short fiction in Daily Science Fiction, The Sockdolager, and Strange Horizons; her first novel, Broken Slate, was released by Crossed Genres Press. Read more about her at her blog, delagar.
No comments yet. Be the first!