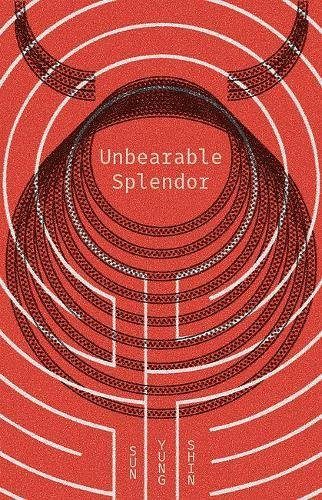 Just as confrontation with the uncanny provokes existential dread, so too does a debate on what qualifies as science fiction. While no one wants to dredge up that kind of terrible, tedious discussion, it’s wise to anticipate the rebuttals that might plague a discussion of Sun Yung Shin’s 2016 experimental memoir/essay/poetry/you-name-it collection, Unbearable Splendor, and its place in the SF catalogue. Not quite fiction, but not quite nonfiction; too real to be speculative, but too unreal to be mundane; too compact to be a novel and too fragmented to be a narrative; yet too consistent, introspective, and growth-driven to be anything but. Whatever it is and isn’t, it most surely is a missed opportunity for the SF world.

Much like last year’s Clarke Award-winning novel, The Underground Railroad, Shin’s Unbearable Splendor has enjoyed success independent of the genre from which it borrows its tools. Winner of the 2017 Minnesota Book Award for Poetry and a 2017 finalist for the PEN USA Literary Award for Poetry, and praised in many prestigious literary mags, reviews, and blurbs that enthusiastically declare “cyborgs!” “Borges!” “cloning!” “Blade Runner!”, it has nonetheless quietly shuffled past SF fandom for the past year-and-a-half, evading any and all Hugo, Nebula, or Clarke talk. Like The Underground Railroad, it’s clearly sci-fi when described by its fundamentals, yet not sci-fi because … well, it’s just not Sci-Fi: it involves familiar sci-fi things, but it doesn’t feel familiar. This little collection is too immense, too unquantifiable, too uncanny to belong in SF’s Goldilocks zone. Even Shin tells us in the first chapter: “There is a limit to canniness, but not to being uncanny—it is infinite …” Unbearable Splendor is too infinite and uncanny to be boxed in by the familiar conventions of SF.

But that’s SF’s problem, not Shin’s. Embracing both the direct and rough translations of Freud’s arguably most famous linguistic interrogation, Unbearable Splendor gives SF the unheimlich maneuver, all while un-ing more words than China Miéville. The collection begins with a black hole and ends with a singularity, while the in-between chapters explore time, space, self, language, and myth. A bit like Hack Circus in the way interrogations of language become both recursive and discursive, a bit like Between the World and Me in the way sci-fi lingo is utilized in memoir with political and psychological intention, and a bit like the work of Philip K. Dick with its investigations of self through the devices of androids and myths and alienation, it’s an uncanny work of literature, done with far more vigor and invention than the usual science fiction narrative.

But is it a narrative?

Like a dream intent on processing one’s daily struggles in the most abstract of ways, Unbearable Splendor kneads and stretches the boundaries between fiction and nonfiction, realism and SF, with the experience of a Korean orphan-turned-American immigrant being central to the experiment. Sun Yung Shin makes herself unhome in this valley of “it is but it isn’t” as she draws from a variety of unconnected sources: SF movies, Greek mythology, Borgesian fantasy; conflating symbols, essays, poetry, and myth to interrogate this feeling of un-home-ness. Each chapter is like a reboot as the thought-process is reset, once again, from the beginning—a more intricate beginning. To approach it as a collection of disparate, albeit creative and intelligent, poetic essays is to enjoy it less than if approached as a complete work, a novel with chapters that, instead of forming a straight line, spiral outward from a central, constant hub: the exploration and interrogation of the uncanny valley of marginalization, alienation, otherness, and unbelonging. Unbearable Splendor is the kind of novel the fragmented psyche writes when it wants to make sense of itself and the world, but it’s been exposed to too much science fiction and scientific apocrypha.

At its core, it’s a sci-fi exercise in self-actualization. As distinct and dissimilar as each chapter is, you get the feeling Shin is telling the same story over and over again—innocence, estrangement, enlightenment. A cycle as familiar as lather, rinse, repeat, but Shin structures it in a way that takes us deeper with each pass. Each chapter is a new code, a desperate attempt to communicate the struggle, yet, counterintuitively, each results in a more complex encryption of the tale. She’s pulling us down with her.

It begins with “Valley, Uncanny,” the most straightforward piece, where the narrator is a child full of holes, “an uncanny guest,” the prose punctuated by graphs. NASA is quoted, Einstein is name-checked, Freud’s unheimlich is established. Even robots and zombies are raised. We are on firm sci-fi ground, so it should feel strange, but sci-fi rarely feels this strange …

Thus, the appropriately named “The Hospitality of Strangers” follows, where that firm sci-fi ground gives way as Shin unravels language and narrative form with brief bullets, truncated sentences, and an abandonment of linearity, first provoking that sense of bewilderment for the reader. “One Hundred Days in the Cave” is a continuation of those bullet-thoughts woven among excerpts of Korean history and folklore, stories of bears and babies. “The Other Asterion, or, The Minotaur’s Sacrifice (A Story)” is a Borgesian tribute, a labyrinthine narrative, and the moment in the novel where Shin’s talent as a writer is most on display as she slips from the disjointed stanzas of the earlier chapters to this linguistically and metaphorically dense piece of fantasia, the work’s longest and most complex piece:

Like music captured and trapped in a parallel, one-dimensional world of black lateral ovals (some empty, some filled in) and vertical lines on lines paper, the prison comes alive when it is expressed through the actions of its prisoners.

“Exactly Like You” investigates fetal dreams, fetal metamorphosis, and “fetal psychic amnesia,” particularly those of orphaned Korean children from the mid-1970s. “Harness”, in the style of a malfunctioning encyclopedia, is a breakdown of words, and a documentation of the process of orphaning, from the impersonal to the personal:

We are a colony of one.

In “Orphan: The Plural Form,” Shin’s thought-process recalibrates into linear form in an essay of linguistic investigation, time travel, and Memento. The next three pieces, “The Error of Blood Relation,” “I Will Make an Example,” and “The Limit Case,” are Shin’s foray into interrogating the story of Antigone, of how the boundaries Antigone transgresses represent more than the limitations placed on her sex, but also those placed on citizenship, territory, and borders, and what it means to those who come from outside those realms.

She is excessive. She is eternal. Hybrid of life and death.

A disobedient woman. A machine at home.

Naturally (but only natural to a sci-fi fan) this invokes Rachael, the android of Blade Runner and Philip K. Dick’s Do Androids Dream of Electric Sheep?, whose numbered thoughts in “In the Other Future” go from genesis and fact to discursive observations and weighty insights about citizenship and womanhood:

16. I didn’t know I wasn’t human. My past was invented, implanted, and accepted. I’m more real than you are because I know I’m not real.

In the poem “Like a Second Person inside Us,” Shin summons Greek symbolism and climate catastrophe to convey the splitting of the self, the endless cycle of psychic destruction and reconstruction when coming to terms with multiple identities, which then leads to the numbered entries in “Autoclonography”, a stream-of-consciousness, non-chronological account of cloning in myth, psychology, and tabloid news. “Unalloyed,” another numbered yet seemingly disparate account, serves as Shin’s final descent into the circles of her soul: her womanhood, in which she examines male fear of women, and the social, cultural, and literary conflations of woman as alien, woman as ghost, woman as god.

Then, from that descent into the soul, the final three chapters represent an emergence of the spirit, beginning with “Paradise,” an homage to Divine Comedy, where the spheres are represented by the planets of the solar system, where half-page paragraphs walk us through the story yet again, from innocence to confusion to splitting to convalescence to hope. But it’s not over yet, for in “Replication” it must all be considered again, this time in the context of reproduction, motherhood, fertility, and infertility:

Family tree like a virus. Contagion, pandemic, and R0.

What psychology calls self-actualization, science fiction calls The Singularity, and here Shin fuses those concepts together in the final piece of her collection (and the denouement of this recursive narrative) with “My Singularity,” a recognition—more matter-of-fact than an embrace—of all that the narrator is: organic and plastic, orphan and immigrant, Korean and American, woman and machine; and a recognition that her internal struggle was always put upon her from the outside:

I am here to solve your problems.

I am here and I am your problem.

Your problem is that I am.

Fortunately for SF, Unbearable Splendor hasn’t been a problem at all.

Like Loading...
© Copyright 2018 By: Megan AM
About Megan AM
Megan AM writes for the lately defunct From Couch to Moon blog where she's been exploring outer space from the comfort of her own couch since 2012.
No comments yet. Be the first!