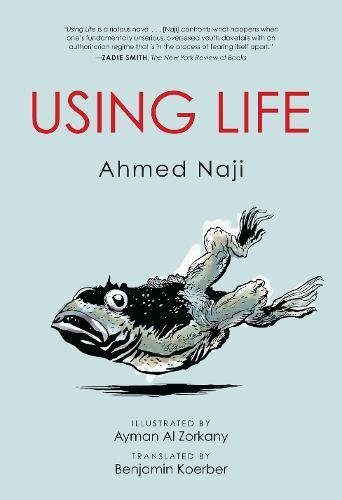 Using Life is a graphic novel constituted of prose texts written by the Egyptian author Ahmed Naji and comic strips drawn by the Egyptian artist Ayman al-Zorkany. It is Naji’s second novel, after his literary debut Rogers (2007), and his first co-authored work. It can be considered a dystopian novel, since it offers a frightening vision of the future, contributing to the recent rise of SF in Arabic literature. But more remarkably, Using Life is a novel about the city of Cairo, its present and past.

The novel starts with a post-apocalyptic vision of Cairo. The main character and narrator, Bassam, a forty-six-year-old Egyptian man, writes from an unknown future and recounts that Egypt has been hit by a catastrophe: a sandstorm and a series of earthquakes that have completely buried and destroyed Cairo. The city of Cairo with its great heritage—civilization, architecture, poetry, and prose—has collapsed, causing an enormous loss in terms of human lives and financial resources. In the pages that follow we discover that a new capital has been built by a totalitarian Society which controls and manufactures everything, from machines to food, clothes, and porno. Citizens have electronic chips implanted into their bodies that keep them traceable and connected to the rest of the world. A mix of Chinese and English is now spoken, replacing Arabic as a common language. The catastrophe goes beyond Egyptian borders. Other capital cities have been destroyed and new ones have been rebuilt, and new geographies have been shaped accordingly.

In the chapters that follow, the main protagonist and narrator, Bassam (Biso to his friends), recounts the events that took place in the years before and which probably led to the catastrophe. He explains that, when he was in his twenties, he and his friends Reem, Mood, and Muna May were recruited by a secret society of scientists and academics called the “Society of Urbanists.” The society was led by Ihab Hassan (homonymous with the notorious postmodern philosopher of Egyptian origin born in 1925) and his assistant Paprika, a supernatural heroine with magic and unknown powers; their task was to transform the city of Cairo into a more human place, by changing citizens’ perspectives on its architecture and how they should relate to it. Bassam is hired by the Society to make documentaries about the buildings of the Egyptian capital. However, he soon realizes that Ihab Hassan and Paprika share different views concerning this plan. While Ihab argues that Cairo should be reformed through a revitalization of its neighbourhoods, and a democratization of space, Paprika demands that Cairo be completely destroyed to make room for a new order. It is Paprika’s plan that is actualized, as she uses her power to provoke the natural catastrophe that destroys the city. Then she makes agreements with construction companies to build Cairo anew as a futuristic capital city. It is from this new future world that Bassam writes to us.

The depiction of Cairo in the future includes many of the tropes that are emblematic of the SF genre, namely a futuristic architecture, a dystopic vision of technology, the presence of a totalitarian government, the devastating effect of climate change. Therefore, it may not sound very original to fans of the genre. However, Using Life is one of the rare works of Arabic literature to explicitly tackle environmental issues as a theme. This vision is clearly inspired by Egyptian contemporary reality. The unbearable heat, traffic congestion, pollution, and garbage described in the novel are hardly an exaggeration of Cairo’s contemporary urban reality. Besides, the destruction of Cairo and its rebuilding as a futuristic city find their reference in the Egyptian government’s project for the gradual abandonment of Cairo’s old city and downtown, and its aspiration to build a new mega capital between the Nile and the Suez Canal (east of Cairo), akin to Dubai, aiming to house 6.5 million people and cover a 270-square kilometre footprint. The plan was officially announced in 2015 as a means of relieving congestion in Cairo, and as of today it is already in the making, attracting huge investments from China and the Gulf.

What is more interesting for me in Using Life, then, is the way in which the author alternates this dystopic vision of the city with stories set in contemporary and nineteenth-century Cairo. The plot is far from being coherent and chronological. As Bassam, the narrator, alerts readers in the opening of the text, what we are reading is “no more than a collection of papers and memories gathered in secret, over a number of years, by a lonely old man. It is a lengthy epistle addressed to the past, an act of narrative trickery in the form of a travel guide” (p. 3). Besides, prose narrative alternates with comic strips, as well as music lyrics from both Arab and western traditions. The text also includes a significant apparatus of footnotes, which provide the readers with additional information about the characters, places, and books mentioned in the narration, thus blurring further the border between fictional and non-fictional works.

There are many references to Egyptian politics and popular culture, ranging from Shafika of Alexandria to Ibn Arus, to the public intellectual Mustafa Mahmoud, that may remain incomprehensible for a non-Egyptian reader (considering also that the translator has decided not to explain them, in order not to overload the already thick apparatus of footnotes). Overall, there is a sense of fragmentation and obscurity in the novel that may sometimes affect the intelligibility of the plot. And yet it seems that this is voluntarily achieved by Naji and Zorkany, perhaps to dismantle the idea of the novel as a coherent work of art, rather to render it unclear and yet enjoyable—just like “life” itself. This is a point supported by the epigraph of the novel, a quotation by Latin author Lucretius: “Life is given to none to own, but to all to use.”

The several pieces work brilliantly together. Zorkany’s vignettes match perfectly with Naji's prose, and in this way the novel is the result of a successful collective endeavour. In a true post-human fashion, Zorkany depicts the city of Cairo as inhabited by figures that are hybrids of technology, human, and animal, as for example in the cases of the “Black Rat,” the “Tiger Shark,” the “Veiled Woman,” the “Biological Taxi” … or “Contemporary Egyptian Woman,” who has a female body while her face consists of a laptop screen reciting “No Facebook.” These are in fact caricatures of Egyptian social types, but in the novel they symbolize the animals that have adjusted to the dingy and corrupted reality of this new Cairo. In another vignette, the story of Bassam intertwines with the story of a man who works in a factory with a printing machine. The worker dies under the overwhelming pressure of hard labour and his lust for the machine. The vignette closes with the machine printing off his sentence “I want to fuck you to death.”

Bassam’s Cairo is “a miserable, hideous, filthy, rotten, dark, oppressive, besieged, lifeless, enervating, polluted, overcrowded, impoverished, angry, smokefilled, simmering, humid, trashy, shitty, choleric, anemic mess of a city” (p. 109). Here, Biso and his friends strive to survive in this inhuman city. They work as graphic designers or for international NGOs, write about politics on their blogs, and mix Arabic and English in their daily interactions. It is hard not to sympathize with them, and especially with Mona May’s disarming humour, or with Reem´s failed love story and her new infatuation for Paprika. Bassam himself explains to us how Cairo is a city that annihilates human relationships with its horrendous buildings, traffic, and social and religious prejudice. Speaking about his secret love for his friend Mona May, he affirms:

Alcohol, drugs, and sex are the only means they have to survive in the bustling and chaotic city of Cairo, which tends to erase humanity. And in fact, the novel abounds with explicit description of sexual intercourse and hashish smoking and explicit sexual expressions in Egyptian vernacular such as “pussy (kuss),” “cock (zubr),” “licking (laʿq),” “sucking (maṣṣ).” The translator, Ben Koerber, has done a marvellous job in rendering these expressions into English, and more generally in turning the Arabic text into a beautiful translation. While the use of these expressions is not new in Arabic fiction, what is new is that the publication of an excerpt from the novel in a State-owned magazine has led to the imprisonment of Ahmed Naji for two years, with the accusation of violating public morality.  In 2016, Naji’s imprisonment caused a huge debate in Egypt and spurred campaigns of solidarity worldwide. In 2017, the novel was granted the PEN/Barbey Freedom to Write Award, bringing him global notoriety. Since the accusation, the novel has been widely circulated, both online in its original language and in translation.

While the novel seems to hint that despair is the condition of the citizen of both future and contemporary Cairo, a glimpse of hope seems to appear in the story. This comes from a rediscovery of the past. Bassam explains that the Society’s new modus operandi under Paprika consisted of implanting beautiful memories in the citizens' mind, forging a fictional version of the past, where Cairo used to be a beautiful city. This leads to a high level of nostalgia among the young artistic generations of the future. Bassam does not only blame the Society for this. He is aware that this issue of forgetting is tied to a hegemonic narrative of history that is transmitted from generation to generation.

There is a sense of impasse in the novel that prevents hope from actualizing. The apocalypse comes, but the world does not end. The Cairo of the future strikingly resembles the contemporary one. For example, rather than subjecting himself to the narrative of this totalitarian dystopian society, Bassam takes on the responsibility of searching for answers in the archives, history books, and old manuscripts owned by the Society of Urbanists. Thus, he discovers that the catastrophe caused by Paprika has an echo in the nineteenth-century modernization process which restructured the city of Cairo: “That future is now. And it stinks, I tell you. It’s the past with a different name. It’s copies of the same, paradigm as a fresh start,” he affirms (p. 22). Bassam in this way discovers important links with the past, and yet is not able to change the order of things. If Using Life is to teach us something, it is that life should be enjoyed piece by piece, keeping in mind that, as the French author Georges Perec explains in his novel Life: A User’s Manual (to which Naji’s novel clearly refers in its title), puzzling is not a solitary game: “every move the puzzler makes, the puzzlemaker has made before; every piece the puzzler picks up, and picks up again, and studies and strokes, every combination he tries, and tries a second time, every blunder and every insight, each hope and each discouragement have all been designed, calculated, and decided by the other.”

Like Loading...
© Copyright 2019 By: Teresa Pepe
About Teresa Pepe
Teresa Pepe is Associate Professor in Arabic Studies at the University of Oslo. She is the author of the book Blogging From Egypt: Digital Literature, 2005-2016 (Edinburgh: EUP, 2019). Her recent work has focused on the recent rise of a dystopian novelistic genre in Arabic literature, highlighting the connection between the aesthetic of these novels and the political unfolding of the Arab Spring. She has recently edited a volume with Stephan Guth entitled Arabic Literature in the Posthuman Age (Harassowitz Verlag 2019), that examines the use of dystopia, necropolitics, monsters and satire in Arabic literature today.
No comments yet. Be the first!