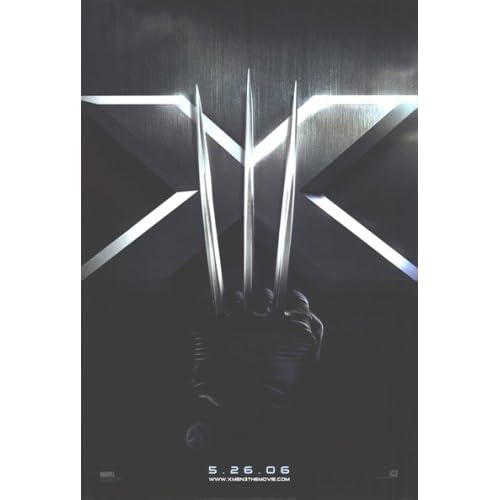 X-Men (2000) signalled something of a renaissance in superhero films. While DC Comics had seen fitful but successful leaps to the big screen for Superman (1978) and Batman (1989), both characters had lost their way in increasingly camp sequels. Meanwhile rival company Marvel had failed to find a mainstream movie vehicle for any of its costumed heroes, with the possible exception of the titular vampire hunter in Blade (1998). X-Men changed all that. In large part its success was due to something that Marvel comics had been mining for years: characterisation. The X-Men comics are famous for their sprawling—even soapy—cast of misfits, and despite the first film's relatively modest scope it successfully captured the flawed, angst-ridden characters who are Marvel's stock in trade.

The second X-Men film, X2, (2003) improved on the first in just about every area. Richer and more ambitious than the original, it remains one of the most successful attempts to capture the spirit of a superhero comic on film. Perhaps its greatest feat was telling an epic story cluttered with incident without losing sight of the individual characters.

X-Men—The Last Stand tries to pick up where X2 left off, dangling threads and all, and adds the tricky burden of turning an open-ended story into a neatly tied-off trilogy. It's only partially successful.

After an effective prologue, the first twenty minutes or so are devoted to introductions in which each character is given the chance to demonstrate their main quirk or power. It's perhaps necessary to bring the audience back up to speed, but in contrast with X2 the execution is often artless and superficial, written with a tin ear for dialogue and a mechanical approach to plotting. These flaws pervade the rest of the film. Throughout, workmanlike dialogue often trips over itself in its rush to advance the story. Even the rousing speeches feel perfunctory, with only a few well-chosen one-liners in the final battle to inject some style.

Characterisation is equally inelegant, and the seemingly endless new characters from the comics get short shrift. Compared to Nightcrawler's compassionate introduction in X2, Kitty Pryde and Angel are sketches at best, while Kelsey Grammar does well as Beast almost in spite of his under-written role. (And Nightcrawler is nowhere to be seen; a real shame given Alan Cumming's sensitive performance.) Likewise, many of the central characters are quite thinly written, particularly Storm in a role that only pays lip service to the idea of character development. The film awkwardly straddles being a standalone piece and the third act of a trilogy: we really have to take on trust elements as pivotal as Cyclops and Wolverine's love for Jean Grey, since they are not so much shown as explained. The script does little to earn the emotional resonance it's seeking, instead choosing to lean heavily on the emotional baggage of the previous film (or the comics). There's potential here for affecting drama, but viewed in isolation it loses much of its impact.

Despite these major flaws, the film is still solid entertainment, and succeeds surprisingly well in aping the visual style and pacing of X2. If the script feels one draft away from a finished product, the characters remain iconic enough to hold our attention. It doesn't hurt that the performances are uniformly strong, with Patrick Stewart, Sir Ian McKellen, and Hugh Jackman once again getting the best material.

The film also has an interesting and even provocative story to tell, blending elements of Joss Whedon's recent work on the Astonishing X-Men comic with a very liberal adaptation of the classic "Dark Phoenix" saga. The central idea is a cure for the mutant gene. It's a premise which can't fail to throw up interesting ideas about normality and how it is defined by society: mutants in the X-men universe have long stood as an analogy for persecuted groups as diverse as Jews, disabled people, and homosexuals. The film is to be applauded for not taking a simplistic stance: some mutants embrace the cure, but many others are deeply offended at the notion that they can be "cured" of something that defines them. Interestingly, Magneto uses his heritage as a victim of the Nazi concentration camps, preaching that the government will come for mutants in the night, yet shows himself to be an implacable racist. In a chilling moment, and one of the film's few deft pieces of scripting, he rejects a mutant who has been "cured" out of hand.

Ultimately, however, the story sidesteps those issues to focus on age-old superhero notions of power and responsibility. Mutants on both sides enter an escalating conflict with the government and each other over their identity and freedoms. This conflict is neatly mirrored in the film's other major thread: Jean Grey's rebirth as The Phoenix, an Id-like persona of power without restraint. Xavier and Magneto's battle for Jean's soul casts them as God and the devil respectively, with the authoritarian Xavier opposing Magneto's "Do what thou wilt" approach to mutant powers. Having Jean embody the struggle between power and restraint is one of the film's most successful conceits, and if the movie can be said to take a stand it's that the right to personal freedom ends when it endangers others. Given the rattling pace and clumsy script there's little chance for these ideas to strike home, but cumulatively they do add another layer to the film.

Inevitably there are several spectacular and inventive special effects sequences, including a memorable Golden Gate Bridge sequence and some brutal, if bloodless, combat. Superhero films have tended to focus on a lone hero, and outside of comics it's rare to see massed battles of superpowers on this kind of scale. The sheer number of super-powered people opens up all manner of plot holes, but the action sequences are effective enough that it's easy to ignore the problems. The film tries to earn its credentials as the end of the trilogy by killing off major characters from a disconcertingly early stage. This seems short-sighted in a franchise with proven longevity, but it does increase the stakes, the only problem being that since Jean Grey has already returned from death such endings have less resonance than they might. Indeed by the time we reach the coda which follows the end credits, the film has already begun to undermine its own finality.

Like many after-the-fact "trilogies," from Indiana Jones to The Terminator, The Last Stand does little to enhance the reputation of its franchise, but inherits more than enough momentum and goodwill to carry you along to its conclusion. It certainly doesn't disgrace itself, but in shortchanging its characters and ideas it fumbles its chances for greatness; there's a great deal more potential in the X-Men universe than is on display here.

Iain Clark has always written a great deal of nonsense, but increasingly feels the need to inflict it on other people. He lives in the North of England with his wife and two cats.

Like Loading...
© Copyright 2006 Iain Clark
About Iain Clark
Iain Clark was born in the same year Star Trek was cancelled. He has contributed a number of TV and film reviews to Strange Horizons, and lives in the North of England.
4 comments on “X-Men: The Last Stand”

Having Jean embody the struggle between power and restraint is one of the film's most successful conceits, and if the movie can be said to take a stand it's that the right to personal freedom ends when it endangers others.
Successful in what way exactly? I would have thought that for Jean to truly embody the struggle between power and restraint she would need to possess far more agency than she appears to in the film. Or do you mean that the struggle is between Xavier and Magneto, conducted through Jean? If so, then the message about personal freedom you perceive is seriously undermined, as Jean comes across more as tool in Xavier and Magneto's power games, than as a fleshed out character with personal agency freely struggling with issues of power and restraint.

I think what I'm trying to say is simpler than that: that it's clever to use the Phoenix in this way; the character does not embody these issues in the comic, yet here she's a good fit for what the film is trying to do. It makes sense, and it further personalises the issues.
However I do agree with you that it isn't necessarily successful in execution. The major problem with Jean in the movie is her passivity and lack of development. For large portions of the film she stands around waiting for the plot to happen. We do literally see Xavier and Magneto's battling philosphies played out in their struggle over her, and that's a neat idea. But she's not so much a character as a symbol. She represents the problem in an abstract way - to be solved from outside - rather than illuminating the choice faced by an individual mutant.
She does ultimately choose restraint over power, but at such a late stage that we don't really feel the struggle or understand her as a human being.
As in all things the film has some nice ideas and characters, but doesn't allow them room to breathe.

the film has some nice ideas and characters, but doesn't allow them room to breathe.
That's very much the feeling I was left with. It's by far the shortest film of the three, clocking in at under two hours, and yet it seemed to have more subplots than the other two films combined.
Also agree that the emotional resonance didn't feel quite earned - Wolverine's last words to Jean don't really feel earned by this film, for instance, but only as a result of its prequels.
I think only having two out of your main cast of 'good guy' characters for the most important bits of the film dragged the film down a bit - particularly when one of them is Halle Berry with that awful, awful eulogy speech grinding everything to a halt.
And finally, although I liked the prologue bit, if there was a part of the film that needed a 'show, don't tell' approach it would be the explanation of the Phoenix. Dealing with it in such an offhand matter-of-fact manner jarred not just with my knowledge of the comics Phoenix but also with the Jean we were shown during the last two films.
So... not awful. Still a cut above most superhero films, but it lacked the thoroughness of thought and ingenious use of concept that made the first two so enjoyable.

Yes, it's a frustrating film because you sense that with the right production team in place and sufficient lead time it could have transmuted its base materials into something a great deal more successful.
The prologue definitely worked (some clever effects there too) but I agree about the horribly expository backstory for the Phoenix. Despite the fact that they foreshadowed its arrival in the last film, the actual explanation for Phoenix is just trotted out in a single dialogue scene and couldn't feel more tacked on if it tried. Only the fact that it involves such a morally grey action for Xavier makes it interesting - indeed the issues it raises of personal freedom versus control are the ones that interested me. But as Geneva said, they're not well developed.