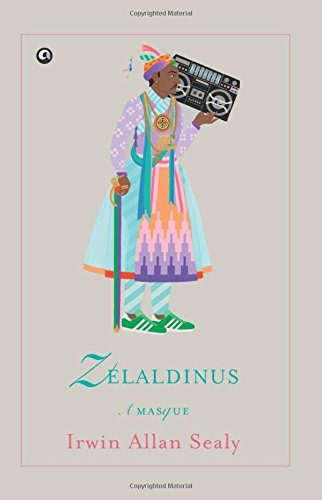 In a corner of one of the highest floors of Udaipur’s towering City Palace, built on a tall outcrop and overlooking the old town, is a small room with nothing but a table and a quill. This was once the workspace of Colonel James Tod, who sat here and wrote The Annals and Antiquities of Rajasthan, a lyrical—and entirely fictional—work, purporting to be a genealogy of the kings of central and western India. Tod’s fantasy-masquerading-as-history is perhaps the most famous Indian example of that breed of writing that Edward Said memorably critiqued in Orientalism and Culture and Imperialism: writing that invested the “Orient” with qualities of mysticism and opulence, the better to know and to conquer it.

Any genre of literature that takes itself too seriously deserves to be parodied. Irwin Allan Sealy’s Zelaldinus: A Masque is an attempt to do just that. “Zelaldinus” was the name that a traveling Jesuit priest gave to Jalal-ud-Din Akbar (1556-1605), widely acknowledged to be the greatest among the Mughal Emperors who ruled India. One of the more famous incidents of Akbar’s life was his decision—in the mould of all “great Emperors” from the time of Rameses II—to build a new capital. Fatehpur Sikri, a city built almost entirely out of red sandstone, was abandoned after fourteen years, with the legend being that water ran out. It stands today, almost entirely preserved as it was at the moment of its abandonment, a fit subject for dirges by modern day James Tods about lost power and the passage of time.

Or for parodies of these. Zelaldinus: A Masque is set in Fatehpur Sikri, with Akbar as its protagonist. It is a free-form long poem that shifts abruptly between past and present, blurs dreamscapes and reality, punctuates narration with aphorisms, and alternates between different plotlines and narrative points of view with no ostensible logic.  In the first part of the poem, the narrator (“Irv,” a thinly disguised version of Sealy), meets the ghost of Akbar in Fatehpur Sikri, and engages him in a conversation that covers topics as diverse as kingship and love, priests and the architecture of the throne room—a conversation that is fragmented by (prose and poetic) descriptions of Sikri, aphorisms attributed to Akbar, and forays into some of the more famous elements of his reign, such as the “nine brilliant men” that he kept as part of his court. In the second part of the poem, we swap registers: now the focal point is a present day doomed love affair between Percy (an Anglo-Indian from Kolkata) and Naz, a Pakistani from Karachi. Irv recedes into the background, and Akbar plays matchmaker by helping Percy to sneak across the (heavily militarised) border.

This is not the first time that Sealey has attempted to tackle themes that are normally reserved for a more self-consciously serious approach. His most famous novel, Trotter-Nama, was a modernist take on the genealogical novel, featuring seven generations of Anglo-Indians, and—as its very name suggests—a  gentle parody of the high-flown lyrical style in which the biographies of Emperors were written. However, in this … original approach to Akbar and Fatehpur Sikri, Sealy has embarked upon an enterprise fraught with peril. First, there is his choice of form: the “masque,” native to medieval Europe, has precious little in common with anything known to Akbar’s Court (or, for that matter, anything known to modern India). In their own contexts, masques were traditionally performed to glorify royalty, and therefore—like all panegyric forms—contain within them the seeds of subversion. Wrenched out of that context, though, and applied to one where the very vocabulary is radically different, it is unclear what role Sealy’s choice of form is actually playing. And then there is the theme itself—if the objective is to parody a certain kind of lyrical orientalism, then it is only too easy, in making that attempt, to dissolve into a kind of pastiche (for example, Sealy’s description, on the opening page, of Akbar as “a man of limitless enthusiasms … both chief participant and magus” of Sikri’s pageants comes dangerously close to kitsch). Sealey’s second major plot point does not make his task any easier—star-crossed cross-border love is an almost outworn subject, explored in the deftest of ways by Partition novels, and in the crudest of forms by Bollywood. Throwing Akbar into the mix is new, but no guarantee against clichés. And lastly, there is Sealy’s own location: as an Anglo-Indian, choosing a distinctly English form (the masque) and the English language to good humouredly fictionalize a Mughal Emperor at a time of fervid Hindu nationalism, Sealy has created more political layers to unpeel than an onion.

If, despite all this, Zelaldinus is to work, I think that it requires us to read it as a self-contained work of speculative fiction, experimenting with form, narrative, history and the borders of the genre, for their own sake. Reviews of the poem have thus far sought to locate it within overarching themes, whether they are about the “unforgettable heritage of the Mughals” or about “autobiography, history, social hierarchies, marriage, fatherhood, and even masonry”, or even “an intimate history.” These, I believe, are flawed readings: Zelaldinus is, very consciously, not about anything. It is certainly not about the “unforgettable heritage of the Mughals,” because apart from a flickering personification of Sikri, and walk-on third-person roles for Akbar’s legendary courtiers, Mughal heritage remains largely remain backstage. And even when it does feature, there is little coherence: we are told at one point, for example, that the only one of Akbar’s “nine wise men” to achieve immortality is the witty adviser, Birbal. Why it is not, rather, the poet Faizi, the historian Abu’l-Fazl, or the musician Tansen (all of whom continue to live as full-blooded characters in history textbooks today), who also find a place in the poem at various stages, is never explained. Similarly, Akbar’s attempt at bringing Percy and Naz together by assisting Percy to physically cross the India-Pakistan border, is so outrageous in its conception and surreal in its execution, that to link it to anything concrete—whether it is love or marriage, or the political conflict between the two nations, would be to do both the (ostensible) subject and the work a disservice. The India-Pakistan conflict deserves something better, and Zelaldinus, in turn, deserves better than to be shoehorned into a redemption narrative.

Read on its own terms, Zelaldinus’ consistent refusal to take itself seriously, its mockery of lyrical orientalism, and its experiments with form and narrative in an entirely unfamiliar setting (the Fatehpur Sikri of Akbar), make for an interesting (if not always satisfactory) read. If we do not try to draw any broader conclusions from the poem, we can enjoy the disorienting shifts in register, the unexpected juxtapositions of past and present, the odd mix of fantastical and realist themes (all hallmarks of an interesting work of speculative fiction), and even moments of lyricism which, chrysalis-like, emerge despite themselves: “daily we fade/ without promise of dailiness” (p. 119), lament Percy and Naz. Even Colonel Tod might have allowed himself a smile at that.

Like Loading...
© Copyright 2018 By: Gautam Bhatia
About Gautam Bhatia
Gautam Bhatia is based in New Delhi, India. When not at his day job as a lawyer and legal academic, he tries to lay hands on the latest works of historical and speculative fiction—with a particular taste for high fantasy and Orwellian dystopias—and read them from cover to cover. He has reviewed before for the Jadaliyya Magazine, and blogs about books at anenduringromantic.
No comments yet. Be the first!