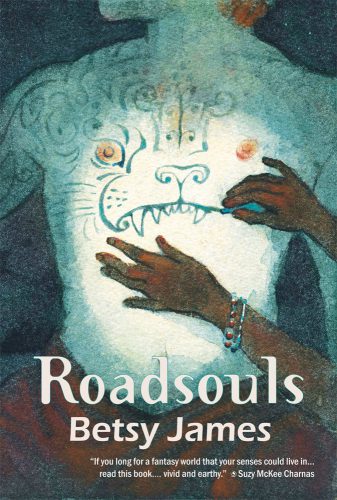 Betsy James’s Roadsouls is ostensibly a young adult fantasy fiction about two children, Dunni and Raím, who join a caravan of what this book calls “Roadsouls.” It’s supposed to be a narrative about coming of age and discovering yourself. Unfortunately, what it really turns out to be is a narrative that should really just get in the sea, because it’s fairly explicitly anti-Romani and yet somehow doesn’t see a problem with this.

But let’s start at the beginning. When the book arrived, I took a look at its back cover and noticed, troublingly, a slip review by Suzy McKee Charnas which stated that the backbone of the book is “the wandering life of a sort of gypsy-hippie-circus group travelling a pre-industrial landscape and offering a way out to the misfits and throw-aways.” This rang more than a couple of alarms in my brain, as the use of “gypsy” and the description of these caravans being largely the purview of society’s misfits and throw-aways are all stereotypical anti-Romani markers. I crossed my fingers and hoped that the book was going to deal actively with overturning these racist tropes. Up until the point where I gave up reading because I couldn’t stand any more, it had not.

By page five of the book we see:

It was harvest fair. The lion was chained by an iron ring to the axle of a Roadsoul wagon, gilt and green. The Roadsouls stole children; she leaned into her mother’s thigh. Then she forgot her mother.

Yet again on page eleven of the book, there is a character talking about how “Roadsouls”—this fantasy world’s representation of Romani culture, remember—are uncouth:

His mother set a plate of plum cake near his hand. He broke off a piece. She said, “Are you a Roadsoul? We have forks. ” He ignored her and ate.

By page twenty-three, one of the Roadsouls has stolen food—a pie—and says, “Nobody wanted it. If they did they wouldn’t of let it be took by the Roadsouls.” I kept waiting for these things to be called out or dealt with, but they weren’t—this was all ostensibly setting up the Roadsouls and an integral part of the fantasy worldbuilding. It was intentional. After a few more incidents of this nature, I skipped to the end to see whether this was ever going to get any better. (Hint: it didn’t.)

The author’s note on Roadsouls, published on its penultimate page, states:

Every society, it seems, needs to believe there can be humans who exist outside culture. Historically it is the Romani people—“Gypsies”—who have been unjustly described as glamorous, itinerant thieves who steal children, have special powers, and are unconstrained by the rules that limit the rest of us.

This need to believe—an archetype—must fulfil itself somewhere. Since it doesn’t fit the Romani, I offer instead the Roadsouls. Roadsouls really are like that.

I don’t know where to even begin with the utter shittery of this, but I’ll give it a shot. The idea that this archetype must fulfil itself somewhere—ah yes, why stop fuelling a racist archetype as a writer? Because it exists, and therefore it must continue? Because this particular use is somehow less negative, since it’s been applied to fictional “Roadsouls,” despite the author admitting knowledge of how this very archetype has been used to vilify and persecute the Romani? Because young adult readers won’t internalise these archetypes and apply them to people they’re associated with in the world? Because the author and the publisher thought they were okay to do this? Because archetypes aren’t linked to history, and history isn’t linked to persecution, and who cares because this is fantasy, right, why are all you people making such a fuss, hey? Just get in the sea already.

At a really basic level, this is an unwillingness to acknowledge the lived reality of a community whose stereotyping the author is willing to exploit for her book. A glance through something like the European Roma Rights Center shows that the persecution of the Romani community (made up of different clans: Sinti, Manouche, Lovara, Kalderash, etc.) is very much a part of the present, not the past, and that its effects are overt racism against them, state-sanctioned violence, economic and housing inequality resulting in (often enforced) segregation or homelessness, being written out of histories with their dead unacknowledged, being constantly accused of child abduction while their own children are often forcibly rehomed by a racist state apparatus.

This is not a thing of the past; it is very much a factor in the present. While some Romani are travellers, some have been settled for generations, but may or may not have trouble finding affordable housing, or being allowed to live in the areas where they’ve settled, due to anti-Roma prejudice. Romani representation in mainstream media is limited, and it is precious for a community whose culture is rarely presented outside of the racist stereotypes such as “exotic” oversexualised women, “mystical” fortune-tellers, child-abductors, and/or thieves. Organisations like the Romani Library Project, Translation Romani, and Lolo Diklo: Rromani Against Racism are working to intervene in these narratives and express the actuality of their culture, while the Roma Education Fund attempts to address some of the factors of systemic educational inequality. It’s not for me to suggest how best to go about Romani representation but I’d say that if you’re keen to read about Romani culture in fiction, I would suggest looking for better options than Roadsouls.

It’s nearly impossible to read these stories, and then look at a book like James's, without realising that the choice to paint the Roadsouls as travellers, performers, thieves, and tricksters is to mobilise a history of violent prejudice. The Roma/Sinti activist Morgan Ahern recounts that in 1955, having fled Nazi persecution in Europe, she and all the Romani children of her age or older were taken by the authorities of the State of New York and forcibly put into foster care—this was “justified” by the assertion of the itinerant lifestyle of her Roma parents. Culture and language were beaten out of them and they were forced to assimilate. When there is the urge to exoticise the idea of travelling and to pair it with exoticism, trickery, and lawlessness, this cannot be divorced from how these very archetypes, so joyfully carolled in that author’s note, are used as violent, state-sanctioned justification. It’s mean and vile and shockingly willing to excuse itself on the basis that fantasy has no power in the real world . . . except for how it really does.

I want to say that I don’t think I’ve read a book as filled with racist fantasy as Roadsouls in years, but I have—because there’s a huge vein of it in SFF and it’s entrenched deeper than most people seem willing to admit. It’s old-school Enid Blyton fantasy racism—the sort of fantasy racism that is incredibly racist but has people leaping to its defence because “that was just the time” or “it’s fine because this is an alternate world” (because why reassess how these things work and are propagated when you can double down on it by adding fetishism and a patina of nostalgia?). So often I find myself having conversations with people who ask, “How is it the year 2017 and we’re still having to explain that racism exists and is hurtful by having to offer proof, as if our lived history isn’t proof enough?” . . . and increasingly I think it has to do with the way we choose to teach history. We use “it was another time” justifications (because that excuses our ancestors and anyone who benefited from those events); we draw a line under it because civilisation progresses; and we don’t realise that doing this is continuing the invisibilisation of anyone not in the dominant group of that time, as though acknowledging past inequality is enough of an excuse to still teach history from a top-down power structure without acknowledgement that pain travels through time as well.

In this way, archetypes become simply blocks for storytelling. This way fantasy racism isn’t racism because it’s fantasy. We’re not internalising culture. We’re not products of that history. That was—this is—another time.

You know what? Get in the fucking sea.

Like Loading...
© Copyright 2017 By: Samira Nadkarni
About Samira Nadkarni
Based in India, Samira spends most of her time explaining Nicolas Cage movies to her father and making bad puns. In her everyday life, she’s an academic. At night, she watches terrible TV and posts blurry pictures of her cat. It’s a life.
5 comments on “Roadsouls by Betsy James”

I expected a review. Not a personal display of political correctness (laudable as it might be) and a history lesson.

N Zapl, that is a review. If you don't want reviews to note when there are Issues with a story, I guess you've never been targeted by one.

Dang, I thought it was gonna be about roads with souls. --Seriously, though, thanks for opening my eyes, and don't listen to anyone who snarks about "political correctness". Too often, not always but too often, it's just a way of saying "I've got privilege and I'm going to crap on anyone who complains of having less than me." Seems like we need some new terms for when someone decides to blow the lid off some sociopolitical wrong.
I wasn't really in the mood for a history lesson either but I could have hit the back button any time. Now I will think twice before inventing scapegoats in my own fiction if I ever write any.

If you had read the entire book it would have been obvious that the author intended an entirely different and more positive view of her fictional romani, your interpretation is utter rubbish. As a reader with romani ancestry i am well aware of the horrors still being perpetrated against the travelling peoples of the world, and the perpetuation of this racism in the fantasy genre (from Jordans Wheel of Time to Jackson's excising of Tom Bombadil from LOTR). Roadsouls left me moved and inspired.

Thank you for the in-depth review of the book's blatant and flagrant racism. I read the whole thing, and honestly, it's even worse. I mostly focused on the profuse heteronormativity and the biphobia and the toxic relationships of the book, but certainly, the racism is there and takes a dreadful psychological toll. I read your article about halfway through the book in the hopes that it would get better (spoiler alert: It didn't), and it's refreshing to see that I'm not the only one who had more than a few problems with this book.
Thanks again. Keep up the amazing work.