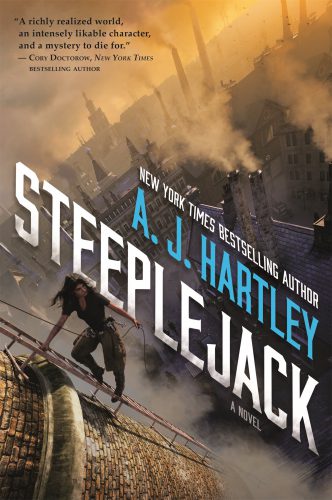 A week after A. J. Hartley's Steeplejack was released in hardcover, Tor.com published his prequel novelette, a slice of criminal intrigue titled Chains. Both texts are set in the same universe—a nineteenth-century, South-African-inspired city of severe class, ethnic, and gender divisions—and both feature the same first-person protagonist, a steeplejack named Anglet Sutonga, who repairs brick- and metal-work high above the unforgiving streets and swampy waters of Bar-Selehm. In both stories, there is much to admire about the world-building: Bar-Selehm is a vivid den of socioeconomic horrors, from the day-to-day predation of urchins, orphans, and outcasts by gang leaders, politicians, and nobles; to the wider systemic pressures that limit opportunities for social mobility; to the wild animals often in close proximity, indifferent to human affairs except when they involve free meals.

However, the differences between these two works are also striking, because they attest to how much fiction (ostensibly) for adults and fiction (ostensibly) for teens can diverge in matters of thematic depth and structural nuance. Whereas Chains offers a seasoned account of Ang's life as a junior steeplejack, and all that she is (and is not) able to accomplish within the parameters of her class position, Hartley's YA novel is restless in its world-building, and frequently introduces social mores just long enough to break them down.

The benefit of this restlessness is the ability to see more of the world that Hartley has built—and in so doing, to engage with the text specifically in relation to its social commentary. To this end, Ang begins the novel as an indentured servant, but also as a third daughter in a strict caste society among her brown-skinned people, the Lani. Much of the politics in this book orients itself around the uneasy interactions between three major ethnic groups: the Lani, the darker-skinned Mahweni (who work as both vendors in the city and traditional hunters and herders in the outskirts), and the whites from the north (who dominate the city's pool of politicians, police, and financiers). As Ang explains, from a body of learning we are to assume comes from her unusual habit of reading books:

The Lani aren't indigenous to the region. We were brought here almost three hundred years ago from lands to the east by the whites from the north. My ancestors came as indentured servants, manual laborers and field hands, living separate from both the indigenous Mahweni and the whites. They were never slaves and believed they had settled in Feldesland by choice, keeping to themselves as the northerners conquered, bought, and absorbed more and more of the land from the native blacks. … By the time [the Lani] looked up from their cooking fires to find that they had turned into a squalid and itinerate people living peasant lives, it was too late. (pp. 25-26)

The complex interplay between these peoples, along with the military threat posed by the neighbouring nation of Grappoli, and the intricate parliamentary politics of Ang's next employers, develops in Steeplejack through a backdrop of land-claim issues, covert sales of property and cultural livelihood, and old wars carried on by other means. There is a promising body of intrigues here, but most of these stories involve secondary characters with fleeting lives in the text. Meanwhile, Ang's motivations for action primarily figure around the case of a murdered young steeplejack; a missing piece of luxorite (the sole distinctly fantastical element of the universe: a rare gem of great industrial significance); Ang's prospects on the streets after injuring her employer in self-defence; and her ability to spare her sister's fourth daughter (an unacceptable birth in her culture) from either death or the hard life of an orphan.

The sheer ambition of all these narrative threads is tempered by two disputable structural choices: first, the decision to reveal so many critical details only when they become of immediate relevance to the plot; and second, to write the story in first person, such that this last-second exposition also serves to undermine our protagonist's reliability as a narrator. For instance, we only learn that Ang's gang leader has long been trying to exploit her sexually right before he attempts such an assault, and although Ang's father is very important to her, we learn that the events of the story's first quarter are taking place on the second anniversary of his death only when Ang needs an excuse to leave her sister's birthing room.

These convenient reveals engineer a great deal of the novel's plot progression, but they also account for why the book takes such a disorienting turn when Ang's steeplejack past is more or less sloughed off to make room for her new, haphazard identity as a private detective. This seems like a detail which, given she is purportedly relating events which are now in her own past, our first-person narrator could have cued us to anticipate from the outset: the bulk of the book is more concerned with Ang as a quick-thinking young woman stumbling through a range of class and cultural milieus to solve a case—and less, far less, with the thrilling steeplejack life of the novel's outset, and the whole of Hartley's prequel. The consequence of this narrative maneuver is a book that seems, stylistically, to change genre partway through, shifting from historical fantasy (not really steampunk, much as it has been marketed as such) to historical detective novel—and one, furthermore, in which Ang's past is of less importance than her existence as a clever young adult in the present.

Granted, near the end of the novel, some of Ang's steeplejack deftness comes to bear on a chase sequence and plaque installation, and she eventually renews her mentorship of young Tanish from her original crew, but for the bulk of the story—the first of a series in which our protagonist will serve primarily as a private detective—Ang follows a familiar trajectory for YA novels. Unmoored from the indentured servitude and familial strictures that confine her character at the outset, she is able to serve for the bulk of Steeplejack as a more flexible cipher for readers who want to wander through this richly constructed world, and see all that it contains. Because of Ang's shifting social status for much of the novel, we get to meet a street vendor with great talent and limited mobility, a herder who becomes a significant ally to Ang's investigation, and an upper-class woman who is, in her own way, severely curtailed from experiencing the fullness of life until Ang comes along.

Being able to contrast this novel with its more adult-oriented prequel does, however, suggest what is lost in this YA process. In both Chains and Steeplejack, any ability Ang has to class-climb and role-bend is contingent on the permissions bestowed on her by people in power—an excellent basis for commentary on a myriad social oppressions in the real world. Only in Chains, though, does this fact come to bear on Ang's actions in a way that establishes her class and ethnic origins as a sufficient framework for critical response to the social structures all around her. In Steeplejack, narrative restlessness has the unfortunate effect of marginalizing the very elements of Ang's identity that the work seems to want to champion. In making Ang the titular steeplejack—but not just a steeplejack, rather mostly a detective—and Lani—but not really of her people, retaining no major customs save for a vague loyalty to her dwindling family—and class-bound—except when she's on a case, where she quickly learns how to inhabit other roles—Hartley plays into a common YA preference for fluidly defined protagonists who, despite heavy opposition, are bound to make the universe freer for themselves and many others in the end. The younger Ang of Chains, conversely, needs no externalized infodumps about resource wars and regional histories to advance a clear understanding of the exploitation in her world: she is, rather, a living embodiment of systemic injustice, and from that vantage point offers greater insight into the knowledge we can develop, the skills we can utilize, and the moral convictions we can retain, even when our external identities are not so easily escaped.

In consequence, and though Hartley's first Alternative Detective novel offers a great deal of thought-provoking commentary for growing readers, seasoned audiences of YA and "adult" fiction might find themselves itching for more works within this promising universe that allow their characters to operate more fully from within their social contexts. Whether in the vein of Renee Ahdieh’s The Wrath and the Dawn (2015), a retelling of Arabian Nights through the perspective of a young woman trapped in nightly mortal peril, or through the multiplicity of narrative voices in Nisi Shawl’s nineteenth-century alternative history, Everfair (2016), YA has a strong tradition of conveying systemic injustice without evading individual social constraints. Hartley’s Chains suggests that the same is certainly possible for the future of this series, too.