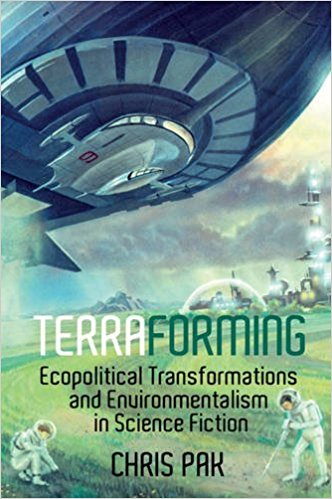 There are five main chapters in Chris Pak’s Terraforming: Ecopolitical Transformations and Environmentalism in Science Fiction, and most SF readers will be unsurprised to hear that their capstone is a discussion of Kim Stanley Robinson's Mars trilogy. Before we get to that, however, there proves to be much work to be done.

This is a book which occasionally shows an excess of the learned learnedness of the ivory tower; there are thickets of words which emit the pheromones of academia. Fortunately, there is a thread running through the book which I found useful in grounding the work. It is the idea that our (first world) human response to nature has changed massively in just the last hundred years. The book also helps itself to work for multiple audiences because it provides much of the necessary primer on both the academic and SF elements under investigation.

The first chapter is, nevertheless, hard work. Whilst "Landscaping Nature's Otherness in Pre-1960s Terraforming and Proto-Gaian Stories" has a few interesting things to say about Olaf Stapledon's oeuvre, it is less convincing on the extent to which we can call the science in that body of work, or other texts such as HG Wells's The Shape of Things to Come (book:1933, film:1936), terraforming. Still, the idea develops here that these proto-Gaian fictions show nature to be greater than humanity, and that mankind must battle and overcome the world to create the perfect environment for ourselves. That positions the work neatly for the next chapter.

"The American Pastoral and the Conquest of Space" uses Ernest J Yaranella's concepts of Gardening the Wilderness to classify examples from the most well known authors of the 1950s and 1960s. This is quite compelling. Yaranella's framework describes responses to the New World—the "Garden of the Covenant" where strenuous effort creates a new Eden; the "Garden of the Chattel" where nature's bounty needs only be harvested, but where that work goes to an underclass; and the "Garden of the World" where the pioneer farmer conquers and claims the world. This works beautifully as a sorting device for works by Clarke, Heinlein and Bradbury, amongst others. Many SF readers will be familiar with the books and stories, enabling Pak to investigate the texts themselves and associated academic concepts, such as those of the pastoral and the idyll. These latter are shown to be generally a poor fit for SF, which, as Andy Sawyer is quoted as arguing, is "essentially a mixture of tension for and anxiety about the future" (p. 58), and therefore rarely stable in either idyllic or pastoral mode. It is also clear that the SF in this chapter has begun to work through the tropes of terraforming as we understand them today.

The book fully earns it title and subtitle, then, in the next chapter, "Ecology and Environmental Awareness in 1960s-1970s Terraforming Stories," as the SF texts it surveys echo the growing environmental awareness of those decades. Interestingly, despite the apparently ubiquitous Gaia theory, James Lovelock's book was published as late as 1979. Hence, Pak again uses the term "proto-Gaian" for most of the work discussed in this chapter. Pak links counterculture environmentalism with SF, and terraforming in particular, through the Whole Earth Catalog, published between 1968 and 1972, which "emphasised a synthesis of nature and technology" (p. 101). The texts covered in this chapter tend to views of planets as ecosystems complete unto themselves, with the plots driven by the protagonists' intervention. These protagonists either learn from or proceed to destroy the pristine. The term ‘terragouging’, new to me, summarises that destruction effectively. Le Guin is a key author in this chapter: The Word for World is Forest (1972) is an exemplar of the idea of living worlds. Further, Pak configures desert worlds both as representing the limits of terraforming and as a stage for more direct political engagement and The Dispossessed (1974) stands with Heinlein's The Moon is a Harsh Mistress (1966) and Herbert's Dune series in this space.

The discussion of Stanislaw Lem's Solaris (1961, English 1970) in this context is unexpected, but Pak makes a strong argument for it being an exemplar of the concept of the "imaginative spaces of terraforming and living worlds" (p. 107). (It is also more likely to be a familiar text than most of the short stories with which the living world concepts are introduced.) The planet Solaris responds to the human imagination more directly than a terraformed world ever could. Pak acknowledges that the book is more usually considered to be about the impossibility of contact with the other; nevertheless this, too, fits with his exploration of the topic of nature as other. Indeed, one can easily read into this section much that the book has already explained about the concept of "landscaping." Throughout, Pak deploys the term as denoting the imposition of human will onto nature, rather than experiencing the world as it actually exists. It is also at this point in the book's narrative that we start to see our experience of nature on Earth undergoing the change from an element to be mastered to a precious system which needs to be protected from human depredation.

That theme takes a further turn in the fourth of the five main chapters, "Edging Towards an Eco-cosmopolitan Vision," which term is immediately explained as an environmental world citizenship (p. 137). Indeed, the chapter begins with a discussion of Ursula K. Heise's own use of the term and the way it can be applied to terraforming. It places this concept alongside the term ecopoiesis, coined by Robert H. Haynes. Literally, "the making of a home," it is intended to describe the process of adapting a planet to make it livable for humans (p. 139). The bulk of the chapter then turns to Pamela Sargent's Venus trilogy, set long after resource wars have transformed Earth into a global agricultural society with a centralising Islamic government. The wealthiest have left the Earth for a space-based technological society now at truce with those left behind. Both groups are needed for the terraforming of Venus—one side's technology to build and maintain the domes, plus the other's labour to populate and tame the land within those domes. In other words, “the political and ethical implications of science and technology are central to Venus”(p. 145): Earth is a breadbasket for humanity, managed to maximise food outputs, whilst the domes of Venus constrain thought as much as movement. The trilogy overlaps with the publication of Robinson’s Mars trilogy, and so this chapter introduces some of the contrasting themes and approaches between the two series. The greatest impact on story shape is that Sargent’s protagonists engage in relativistic travel to reach through time whilst Robinson provides life extension technology.  As a result, much of the terraforming of Venus happens off stage; when the characters return at the end of the story they have to try to understand what happened in their absence.

Writing at a similar time, Frederick Turner turned to epic poetry to tell the terraforming story differently. Genesis (1988), a poetic description of the terraforming of Mars, found an audience within NASA, allowing the writer direct engagement with the scientific conceptualisation of terraforming. Turner’s view was that the epic involves a “nostalgic yearning for home” (p. 161), which brings Pak back to the theme of the chapter: environmental world citizenship. For Turner, this concept applied to this or other worlds through a polyphony of cultures where the ultimate epic is human evolution (p. 161).

Which brings us, almost inevitably, to "Kim Stanley Robinson’s Mars Trilogy," the chapter and the work itself, which “incorporates overt environmental ethical reflection and brings this to bear against the industrial exploitation of Mars” (p. 168). Early in this chapter, Pak references Jed Rasula’s concept of American poetry as a compost library, where “newness arises from the continual recycling of language, shaped by the author’s attentiveness to predecessor texts and by reader interaction” (p. 169). Whilst this is nicely academically footnoted, most SF readers would be more likely to apply the long-accepted idea that SF is ‘in conversation with itself.’ Associated with all this, and directly referenced, is the idea of the SF megatext, and Pak suggests “Mars and terraforming as a site for the composting” (p. 170). However we reference it, Robinson’s trilogy draws in influences from many directions, and Pak shows just how purposeful this process is, particularly as he can utilise Robinson's own comments on the Mars trilogy, and on his work in general, as part of the discussion. As the chapter discusses the arguments about politics, economics, and technology which form a significant part of the plot of the trilogy, it can also recapitulate many of the positions posited through the book. Whilst I have never re-read the trilogy, the presentation here of arguments on science, the aesthetic appreciation of nature, the use of a world as resource, or its intrinsic value all feel true to my memories of reading Robinson.

Pak's book demonstrates the growth of an environmental consciousness through the course of science fiction history, which reflects the growth of those concepts in general society and which has also influenced science and environmental philosophy in turn. For a survey of this kind, Pak has achieved a balance between mainstream and less familiar figures and works. The earliest works he deals with don't strike me as useful examples of terraforming in fiction, but they do create the foundation for a discussion of how human responses to nature have changed. The narrative grows stronger from the 1950s, a period which is still early for modern environmentalism but is clearly core to the development of terraforming in science fiction. Considerations of terraforming then provide responses to the environmental movement as it emerges and matures in wider society. The end result of this dialogue is a view of our Earth as a place where we are making specific choices about the nature and nurture of our planet. That we can now see this planet as our garden, rather than a wilderness beyond our control, is in part because we have imagined other ways on other worlds. As a result, we can become more intentional in what we do with this one.

Like Loading...
© Copyright 2017 By: Duncan Lawie
About Duncan Lawie
Duncan Lawie has been reviewing SF for half as long as he has been reading it, although there was a quiet period during two years as an Arthur C. Clarke Award judge. His reviews also appear in the British Science Fiction Association's Vector Magazine.
No comments yet. Be the first!