Non-Fiction, Reviews
Size / / /
The Black Tides of Heaven and The Red Threads of Fortune by JY Yang
By: Foz Meadows 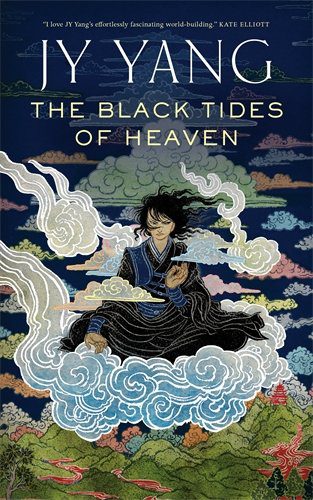 In the world of the Tensorate, the Protector rules all. When she promises one of her children to the Head Abbot of the Grand Monastery in exchange for his help, the Abbot assumes he’ll receive her magically talented daughter, Sonami. Instead, the Protector uses slackcraft, the magic of tensors, to conceive a new child to give him. Both Abbot and Protector are caught off-guard, however, when the pregnancy yields not one child, but twins: Mokoya and Akeha, both of whom are sent to the monastery.

As the children grow to adulthood—and as Mokoya’s strange gift for prophecy casts an increasingly long shadow over their lives—they come to see the darkness at the heart of their mother’s Protectorate. After years of relying only on each other, the twins are ultimately forced to choose their own paths—but no matter how far apart they travel, their love for each other remains.

Intended as standalone novellas—twinned, as the protagonists are twinned—The Black Tides of Heaven and The Red Threads of Fortune are the first instalments in JY Yang’s silkpunk Tensorate series. Though each volume is intended to stand on its own merits, I’d suggest that The Black Tides of Heaven is the better starting point: though very much Akeha’s book, it shows us the events of his and his sister’s youth, establishing their history and the context of the setting, while The Red Threads of Fortune is set much later in their joint adulthood, following Mokoya through the aftermath of a personal tragedy.

For a while now, Tor.com has been making a name for itself as a largely unrivalled purveyor of novellas in the SFF marketplace. Yang’s work is a continuation of the high-quality content they’ve been producing, and is part of an new trend of releasing multiple short works as part of an ongoing series, such as Seanan McGuire’s Every Heart a Doorway, Down Among the Sticks and Bones, and Beneath the Sugar Sky. As such, while each novella can be read alone, it’s their serial nature that fascinates me. SFF writers creating shorter works within settings established by their novels isn’t new—see Lois McMaster Bujold, Martha Wells, and K. J. Parker, for instance—but creating a setting using only shorter works is vastly less common. While there are good reasons for that, historically speaking, the internet has changed the game, and as someone who spends an inordinate amount of time reading fan fiction—which is to say, predominantly shorter works set in established settings—I’m confident this is something we’re going to see more of.

Traditionally, hard-copy publishing has always played by set rules when it comes to the length of publications meant for adults. While there’s been a degree of necessity to this practice, the success of children’s and middle-grade books, which are much shorter in length without being drastically more expensive to produce, belies the idea that the rationale is purely cost-based. Narratively speaking, there’s every reason for short works to be compelling regardless of whether they’re set in established worlds or new ones; and especially, I would argue, in SFF. One of the great draws of fanfic, which is overwhelmingly popular within SFF fandom, is the fact that, rather than having to explain the worldbuilding up front, a base degree of audience knowledge about the setting can be assumed, allowing for a more immediate, streamlined form of storytelling. By the same token, there’s also a fanfic tradition of writing original AUs where, despite the introduction of what are often complex, new SFF settings, the focus remains firmly on the characters.

To me, Yang’s Tensorate series is reminiscent of both approaches. The simultaneous feature and bug of traditional long-form SFF is that setting is always deeply entwined with narrative, not necessarily in the sense of dictating characterisation (although I’d argue that it should), but as a constant descriptive presence. Even in ostensibly character-heavy narratives, it’s common to take an expansive, lavish journey through fantastic conceit, whether geographically or via internal narration or a mixture of both, and while that’s something I avowedly love, it’s also deeply satisfying to see the same effect achieved with skilful minimalism. It’s not that Yang’s world is lacking in originality or richness—demonstrably, the opposite is true—but that the novellas are written as if the reader already knows the setting. 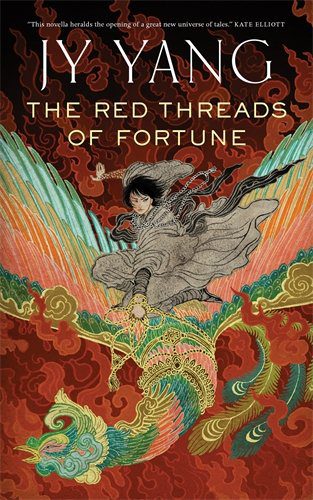 From the start of The Black Tides of Heaven, which follows Mokoya and Akeha through their shared childhood, we come to understand the world osmotically. Yang’s description of slackwork, the magic of the tensors, is simple in a way that nonetheless allows for great complexity of execution. We encounter the world as the characters do, its full scope intuitively obvious without the need for lengthy explanations. This understated approach works to delightful effect, allowing for a pacey read that nonetheless hinges on immersive characterisation.

In the Tensorate, children are considered genderless until they declare themselves to be male or female. For some, this happens early in life; for Mokoya and Akeha, however, the decision comes much later. As a piece of worldbuilding, this is compelling—though the part of me that geeks out on details could’ve wished for a little more explanation at times, particularly around the existence of what appear to be magical puberty-blockers for those whose gender determination is later rather than earlier. As a mechanism for characterisation and provoking reader insight, however, it’s masterful. As in Ann Leckie’s Imperial Radch series, which uses “she” as a default pronoun, the use of “they” to describe both twins for most of The Black Tides of Heaven forces the reader to view the characters outside of pre-existing conceptions of gender. Similarly, the existence of body-altering magic means that, once the twins identify themselves, it’s possible to read one or both as trans—as, indeed, is the case for any character in this setting. Yet there are also explicitly trans and nonbinary characters: most notably Akeha’s partner Yongcheow in The Black Tides of Heaven and Mokoya’s lover, Rider, in The Red Threads of Fortune.

Structurally, the two volumes are very different, yet both find a common thematic core in the ways in which Akeha and Mokoya fight back against their mother’s authoritarianism. Born with the rare gift of prophecy, Mokoya has spent her life tormented by visions of a future she can’t change, yet marked for greatness all the same. By contrast, Akeha has grown up feeling like the superfluous twin: the unmagical child his mother never meant to have, a spare without a destiny. As closely connected as the twins are, their differences nonetheless seed a tension between them, and when Mokoya forms an attachment to Thennjay, a young radical destined to be the future Head Abbot, Akeha ultimately decides to leave his sister and pursue his own life elsewhere. Eventually, this leads him to meet Yongcheow, his future lover, and to their involvement with the Machinists, a group of rebels fighting against the Protector.

The Red Threads of Fortune, set many years later, picks up from Mokoya’s perspective in the wake of her own separation from those she loves. Mourning the death of her young daughter, Mokoya seeks to unravel a mystery both political and magical by travelling to Bataanar, a distant region of the Protectorate, where a naga has been causing trouble. But the more Mokoya investigates the situation—and the closer her attachment becomes to an enigmatic Quarterlander called Rider, whose presence is tied to the naga’s appearance—the more she comes to realise how this new tragedy parallels her own. Mokoya, too, is involved with the Machinists, and as she struggles to reconcile her prophetic gifts with her desire to make a new future, the struggles of revolution are paralleled by a subtle discourse on grief, love, and hope.

As the Protectorate struggles to make a new future for itself, so do Akeha and Mokoya, their personal arcs defined by self-determination in the face of loss. Akeha’s solo journey in The Black Tides of Heaven begins when, angered by his own feelings for Thennjay—not out of self-hatred, but because sharing him with Mokoya would mean binding himself to a destiny not of his choosing—he flees familiarity and makes a new life for himself. This is what ultimately brings him to Yongcheow and the Machinists, and an agency all his own. Dovetailing with this, The Red Threads of Fortune begins with Mokoya, now an adult, alone for the first time in her life, isolated from Thennjay after the death of their daughter and heedless of her own safety. The bond Mokoya forms with Rider is significant, not only because it denotes her emotional healing, but because it represents a vital break from the prophecies that have governed her life and her choices. For the first time, Mokoya is able to enter a life beyond prophecy: to glimpse the possibility of a happier future, and to work for it.

Whether taken singly or together, The Black Tides of Heaven and The Red Threads of Fortune are evocative, emotive pieces of storytelling. I highly recommend them to both new and established fantasy fans alike, and eagerly look forward to whatever JY Yang writes next in this universe—or at all, for that matter.

Like Loading...
© Copyright 2018 By: Foz Meadows
About
About Foz Meadows
Foz Meadows is a genderqueer author, blogger, reviewer, poet, three-time Hugo nominee for Best Fan Writer, and winner of the Norma K Hemming Award. Her most recent novels, An Accident of Stars and A Tyranny of Queens, are available from Angry Robot Books. Though Australian, she currently lives in California.
No comments yet. Be the first!