Non-Fiction, Reviews
Size / / /
The City in the Middle of the Night by Charlie Jane Anders
By: Nicasio Andres Reed 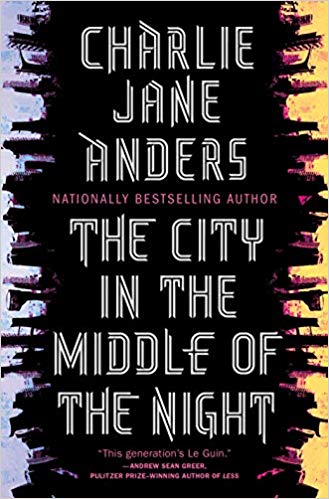 People are calling Charlie Jane Anders “this generation’s Ursula K. Le Guin,” but I’d argue that she’s more powerfully described as my generation’s Charlie Jane Anders. Where Le Guin’s social critique and science fictional ethnography most often comes to us from a narrator with a professional or academic lens looking down from above, Anders nearly always writes from the bottom looking up. Anders is at the forefront of the popular resurgence of protest literature in science fiction.  The City in the Middle of the Night is a book that is in conversation with a stunning array of current issues, while its characters struggle with multiple layers of personal and social responsibility that go all the way from the responsibility we bear for our friends to the responsibility we bear for the planet. In this moment, where we stand amid the global rise of fascism and the irrevocable changes to the climate, Anders writes about the vital importance of looking failure in the eyes and trying again anyway.

The City in the Middle of the Night is Charlie Jane Anders’s third novel, her second from Tor, and our first introduction to the world of January, a tidally locked planet with a sunward side that is perpetually scorched and uninhabitable, and an unlit side that’s trapped in a perpetual frozen midnight, moonless and absolutely dark. Generations ago, humanity landed on January and colonized its thin strip of hospitable land, the dawn/dusk corridor between the extremes. They founded the city of Xiosphant, and since that founding have accumulated several hundred years’ worth of social and political upheavals that led to offshoot cities, fractured from Xiosphant by choice or by violence.

The book spends time in three cities, each showing one aspect of January. Xiosphant has become a place with strictly enforced timekeeping that governs every hour of its citizens’ lives. Every window has a shutter, and every shutter is centrally controlled so that its populace is induced to share a collective experience of “night” and “day” despite living in a place without either. Argelo is a city across an ocean and to the south that claims to “never sleep.” No shutters on its windows, and no shared clock among its people, the sky above an unchanging bright gray, a jolly chaos of each person choosing the time when they might sleep or eat or wake or venture down into the club district’s never-ending dance party.

The third city is the oldest and the titular one, and it doesn’t have a name. Out in the dark and the ice is the city of the original inhabitants of January. It’s the city of the crocodiles, of the Gelet.

I have to back up a moment here to praise the efficient,  ingenious, and somewhat hilarious way in which Anders dealt with the issue of naming a whole planet of indigenous life and features, as well as solving the science fictionist’s perpetual dilemma around naming future technologies. The book opens with a one-page “Translator’s Note,” the main thrust of which was obscure to me until very late in the novel (by which point I’d forgotten about the hints in the note), but the most charming bit of which was about naming.

Note: Where settlers on January chose to adopt archaic Earth terms for common items, along with local flora and fauna, I have attempted to render this into Peak English as seamlessly as possible. (Hence “radio,” “lorry,” “pager,” “crocodile,” “cat,” “bison,” etc.)

It’s such a simple fix, but it operates on multiple levels. As a writer myself, I immediately thought of how much easier this made it on the author, who then didn’t have to spend her time coming up with a plausible and unobtrusive word for “space radio.” Within the text, when we encounter creatures like the native bison or cats or crocodiles of January, we experience the interplay between the physical descriptions of these creatures and the inherited implications of their names. January’s crocodiles may have enormous tentacles, faces made up of psychic, grasping cilia, and carapace-like plating over their bodies, but somehow the human settlers saw them and perceived something crocodilian, and so the reader does too.

The best aspect of these names is that Anders does not leave them uncomplicated. The crocodiles are a sentient species with a long history and a massive, flourishing city. When Sophie, one of the human protagonists, realizes this, she tries to translate their name for themselves into something a human mouth can pronounce, and calls them the Gelet. She starts to correct others who call them crocodiles, realizing that imposing a foreign name onto a people without their input or consent is a dehumanizing act, and that it’s contributed to the violence that January’s humans have enacted on the Gelet. It’s because Sophie sees the Gelet for themselves, and is willing to look at her own people through their eyes, that she’s invited to their city. That’s the one in the middle of the night.

Sophie is one of two narrators that the book alternates between. She’s a young woman from Xiosphant who is doing very typical young person things: going to school, staying up after curfew, falling in love with her best friend, trying out some subversive politics to see how they fit. On an ordinary day, on the spur of the moment, she takes responsibility for an inconsequential crime which she didn’t commit. For this, the city police try to execute her, and although she survives, it’s only on the fringes, and in fear. Our other narrator is Mouth, a woman who was raised on the road between cities, among a religious community of which she is the sole survivor. She grew up to be a smuggler based in Argelo, one of a patchwork family of smugglers. Sophie and Mouth spend some time not knowing each other, a big chunk of time distrusting each other, and finally come to rely profoundly on one another. Through the two of them we get to meet a huge variety of characters in all three cities, many of whose brief appearances left me wanting more. But Sophie and Mouth’s stories both become one of rapid change, rapid movement, constant adaptation. There is something familiarly millennial about the way that Mouth and Sophie cycle through jobs and apartments. Nobody seeks to live an insecure life, but in The City, as in the world so many of us move in, job insecurity and housing insecurity seem immutable, simply another part of the landscape.

Anders’s worldbuilding is dense and rapid-fire. The dry, repetitive misery of life under the Xiosphanti government is spelled out not only through Sophie’s fears, but also in dropping in that the most common alcoholic beverage is “gin-and-milk,” an idea that’s haunted my lactose-intolerant dreams. Another quick attack on the Xiophanti lifestyle is the existence and popularity of oatmeal restaurants. A national palate defined by those two examples is enough to warn me off the city, politics aside. A lot of the more detailed explanations of the world of the novel are left until quite late in the game, and these were welcome and well integrated when they did arrive. I personally would have preferred an earlier mention of precisely how far in the future the novel takes place, if only because I spent the first two thirds of it internally arguing against the likelihood of particular cities on Earth being big technological and population hubs that would contribute to the January-bound generation ships.

When that sense of pre-January history is in place, and because it is bolstered by consistent details about the history of human life on January, both in the long view and in the small details of architecture and language, then The City in the Middle of the Night shows its true, massive scope. The life-threatening and world-shaking dangers that its characters face in the now are understood as resonating from conflicts that have spanned generations, that were carried across space from Earth, and that have infected January’s native ecosystem and native society like an invasive species. It’s a long history of failure. The same could be said of Sophie and Mouth’s lives. And yet, Anders never turns to a narrative of defeat. Instead, these characters stand back up and try to find another way. Even in the most lightless corners of the night, when every foothold has fallen away, they try. May we all find such strength within ourselves and among each other.

Like Loading...
© Copyright 2019 By: Nicasio Andres Reed
About Nicasio Andres Reed
Nicasio Andrés Reed is a Filipino-American writer and poet whose work has appeared in Queers Destroy Science Fiction, Strange Horizons, Shimmer, Liminality, Inkscrawl, and Beyond: The Queer Sci-Fi and Fantasy Comics Anthology. A member of the Queer Asian SF/F/H Illuminati, Nico currently resides in Madison, WI. Find him on Twitter @NicasioSilang.
No comments yet. Be the first!