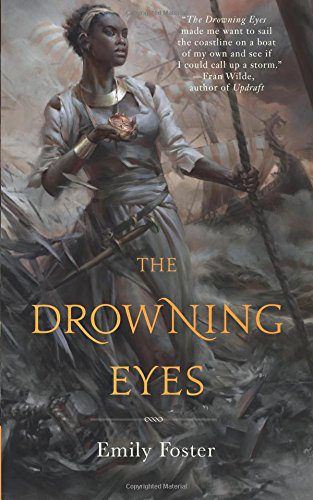 Emily Foster's debut novella is everything I like about modern fantasy. The world it builds is not a fictional Europe or a fictional North America; instead it's set in a tropical climate, in the middle of an ocean, with many small islands dependent on the weather for trade and survival. The characters are a seafaring crew who don't shy away from illegal work, people from the margins whose life philosophy is that money and happiness should be grabbed wherever they happen to be found. The cast is ethnically diverse and most of the action is centered on women, including older women, who occupy positions of authority within the small world a story of this length allows. All of this is refreshing and a pleasure to read and the reason I was excited to pick up the book in the first place.

And yet, as much as I wanted to fall in love with The Drowning Eyes, as much as I liked its setting and magical elements, as much I enjoyed its characters individually, there were a few structural problems that stood in the way of the book having true momentum. It's not that the story isn't enjoyable; it's just that, considering its premise, it comes across as a little underwhelming.

The novella has several protagonists, but only one of them is on the beautiful cover: Shina. Still a trainee, Shina is a priest of the religion of the islands, which is reliant on the ocean and the weather. She is known for having “wet eyes,” meaning the eyes she was born with, and hence imperfect control of the weather at best. True control, for a mature priestess, means having her eyes taken out and replaced by stones. All this ties neatly into the magical premise of The Drowning Eyes: the priests in this world, after all, can control storms. This ability is as vital to the greater good as it is costly.

At the start of the story, Shina barely escapes an attack on her school by an enemy force, and her religion is facing a crisis: as a result of the attack, all the Windspeakers have lost their ability to do magic. Shina must go on a journey to restore this power, with the help of various artifacts. She buys passage on a small vessel called The Giggling Goat, which is crewed by a band of misfits and operated by Captain Tazir, a woman with gray in her hair.

The story progresses from two vantage points: Shina and her mission to find a sacred religious item while trying to access her storm powers as best she can, and the crew of The Giggling Goat, who slowly come to suspect Shina is not who she seems to be (that is, a wealthy girl running away from her family). The crew slowly go from thinking of Shina as just a passenger to getting caught up in her complicated magical struggle.

A lot of this is delightful. The story combines lighthearted adventure and humor, while at the same time portraying a world that's anything but simple or overwhelmingly positive. On the one hand we have bits like this, where Tazir witnesses Shina having a nightmare and offers her rum as a solution:

The Captain clicked her tongue. “Well, I don't know your life,” she said, “but that might be part of your overall problem."

There are also genre-aware bits like this, where the team finally learns of Shina's true background and she sits down to tell them about her mission:

Now Kodin was stirring in his hammock in the dark end of the bunks. “Hey,” he murmured. “Can you two—"

Kodin grunted and shifted again. “I wanna be on a quest,” he said, sitting up. “Can I be on the quest?"

"Of course you're on the fucking quest,” Tazir said. “You're the only one on this ship who can read."

Meanwhile, while we have Shina's own narration of her religion and her magic powers—where losing your eyes to have more perfect control over the weather seems like a mundane ritual one is raised to take for granted—we also have other perspectives, like that of crew member Kodin:

Kodin had been raised just south of the temple on Tash, where they taught young Windspeakers to control their abilities. Sometimes, full-grown Stormcallers with wet eyes and dangerous talents were brought to the school in chains, to have those eyes gouged out and replaced with stones that reined them in.

All this makes the world of The Drowning Eyes pleasantly varied and complex. No one is absolutely right or absolutely wrong in the conflicts among its protagonists—it's all about what each person values, what they want their life to become. In a way, the contrast between Shina and the crew of The Giggling Goat is structurally brilliant: she's young and idealistic, a devotee for most of her life, someone who believes in being a vessel for a greater purpose, even at great personal cost; her seafaring companions, on the other hand, mostly have the opposite attitude. They've never felt part of a system or a chosen elite. To them, the world can take care of itself, and only a fool would give up their eyesight for some supposedly important role.

Again, the book is not about whether one of these points of view is more virtuous or correct than the other. Rather, it's about the change that happens through conflict, through the broadening of horizons, through love. By the penultimate chapter of the novella, for example, Chaqal, the quartermaster of The Giggling Goat, is taken with Shina, while Tazir is furious that Shina would sacrifice her life for what she considers to be the greater good. This moment, when all the characters are in conflict with each other—just as Shina is about to risk her life yet again and the stakes are at their highest—is arguably the highlight of the book. It brings together every thread the novella weaves—the character development, the clashes inherent in the worldbuilding, the escalating plot—in order to complete Shina's quest.

Unfortunately, the last and final chapter skips ahead in time, foregoing the development of Shina and Chaqal's relationship, and the resolution of all the other conflicts the story sets up, to give the reader a kind of epilogue: Shina doesn't give up her principles, and Chaqal stays with her, and the rest of the crew remain themselves, with aging Captain Tazir forced to take a timeout.

Perhaps the novella format was simply too short for this story. Maybe there were structural changes that could have been made to make the action seem more immediate sooner, or to not undercut the ending. That jump-ahead simply negates the story’s immediacy: although it’s nice to step outside of tumultuous time, and find out what happens to the characters when all is settled, the shift goes against the spirit of the book as an adventure story. While The Drowning Eyes was a pleasant read, it was sadly not as gripping as I'd hoped it would be.

Like Loading...
© Copyright 2017 By: Marina Berlin
About Marina Berlin
Marina Berlin grew up speaking three languages in a coastal city far, far away. She’s an author of short stories who’s currently working on her first novel. You can follow her exploits on Twitter @berlin_marina or read more about her work at marinaberlin.org.
One comment on “The Drowning Eyes by Emily Foster”

It's a sad day when making genre awareness so overt in the story is marked up as a pro. (And heavens forfend that other writers take up the call in anything that isn't satire or pastiche...)

For me, the overt expression of that awareness is just one example of several under-developed aspects of the novella. On top of this, Foster does a lot of hand holding to the reader, the characters are not rendered in 3D or adult terms, and the progressive aspects of the story are bullhorned, just in case you should miss them, but not developed. I support the inclusion and examination of feminism and lgbt ideas in fiction, but telling rather than showing without making those ideas relevant is not an effective means. It's token, just like the use of genre awareness, and, if I had to be truly honest, the novella itself.