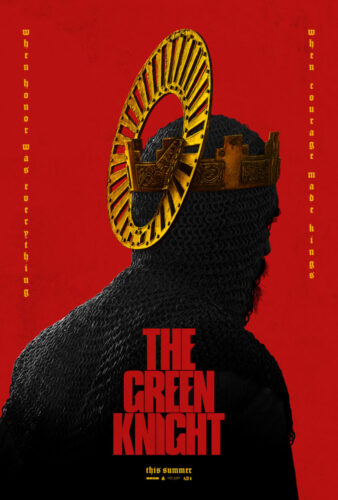 The fourteenth-century poem Sir Gawain and the Green Knight is largely a poem about waiting. Its hero, having entered into a game with the titular Knight that he doesn’t fully understand, has a year and a day to kill before he must meet his end of the bargain—receiving the decapitating blow he himself has already dealt to the Green Knight. Much of the poem’s account of that year is taken up by the narration of the structures that surround its main plot points: describing the minutiae of Arthur’s court, describing the five virtues that structure proper knightly life, describing the rules that structure the Knight’s game and the chivalric code that compels Gawain to seek him out. But in some ways, the question of how to adapt Sir Gawain is the question of how to deal with the substance of that year, with what the original leaves unsaid.

The Green Knight, David Lowery’s recent filmic interpretation for A24, solves this problem by making that waiting visible. How would it feel, it asks, to be told you have a year before you must present yourself to an otherworldly adversary, weapons tossed away, voluntarily going to what seems like it must be your death? What would you do with that year?

In the lineage of recent man-vs-nature movies, where a singular lead takes up most of the screen time, The Green Knight places Gawain and his journey at its center. Unlike many of those films, however, the relationship between the hero and the natural world is much more ambiguous than straightforwardly antagonistic. Gawain, played by Dev Patel, is a self-confident posturer and an accidental knight in waiting, pulled into the Green Knight’s game through a mixture of his desire to prove himself and the fact of his own youth. This is one of the several liberties the movie takes with its source material. While in the poem Arthur’s court is young and joyous, the movie’s Arthur and Guinevere are old, and Arthur can’t accept the Green Knight’s challenge because his body betrays him. And so it falls to Gawain to play the Christmas game and chop off the Knight’s head, binding himself to the year-and-a-day contract in the process.

In order to bulk out the runtime of a poem that often glosses over its hero’s exploits, the film invents a number of trials for Gawain to overcome, from an inserted romance to a number of delays on the road to the Green Chapel. These plot points reduce the heavy solitude of the poem that’s preserved in other parts of the film, and do so sometimes to its detriment. The movie is at its best when Patel gets to be the center of attention struggling against himself, whether that struggle is with his physical needs or the more ephemeral challenge of his own pride.

Fortunately, the cinematography conveys a solemn tone that is extremely consistent, whether in Arthur’s crumbling court or in the empty battlefields far from it. The film’s dark lighting coats the vivid forests and stark brown fields of the movie’s middle in shadow. Patel is often the visual focal point, whether it’s the twirl of his yellow shroud as he runs down a steep hill or rides into a turn in the road, or the camera lingering on a hand pressing against his face. His economy of expression steals the show; the psychological weight of a scene is frequently carried by his easy smile, scowl, or occasionally wide-eyed terror at whatever force of nature has sprung up in front of him.

One of the cinematographic keys of the film is the circle, an image which is mirrored throughout in the curve of cathedral windows, crowns, and the wheel of seasons in a puppet show. Even camera pans often follow a circular trajectory, as though you are spinning around in place, getting a 360-degree view of the landscape. One of these in particular, a lingering shot in the film’s middle that tests how long the viewer can hang on to a single point of view, is haunting in its exploration of time and its inevitable motion forward.

This imagery of a circle divided into parts recalls a number of medieval circles that lurk behind both the original poem and its successor. For example, in the logic of the medieval system of humoralism, diagrams of which are often represented as four-part circles, each quadrant corresponds to a season, and also to a period in a person’s life—infancy, youth, middle and old age. Another circle, the rota fortuna, determines a person’s luck through their lifetime, sometimes rising and sometimes crashing down. In a medieval context these circles are not just shapes but representations of the passage of time and the inevitable fluctuations of circumstance that come with it. The film’s circular shots paired with the overarching trajectory of the film towards decay and disorder, which it situates as natural progressions of the young and healthy, expertly connect the film to the logic of its source material, without ever overtly mentioning it.

Even the film’s opening shot, a view of a building on fire and two figures rushing away, which then pans to a sleeping Gawain awakened suddenly and unceremoniously by his lover, emphasizes this circular structure, taking us in from the cold and into the hero’s inner life. From this moment, the movie is making a point about the ecology of its plot—there is a world of things happening that do not involve the characters you are following, that will happen without being fully explained. In a later sequence an exhausted Gawain, ravenous with hunger, eats some mushrooms and vomits them up before hallucinating that his hand has been colonized by an outgrowth of fuzzy mold. He blinks, and the mold is gone. Soon after, he crosses paths with a procession of giants whose speech is too deep to be understood; the camera pans and then spins, as if it’s fainting, and when we wake up, Gawain too is on the ground, somewhere else. The fantasy comes more from the limits of human perception—what we make up, and what we limit our understanding of in order to protect ourselves—than from any external plot device or genre convention.

These lapses in reliable perception make it very easy to describe this movie as trippy or disjointed. But describing it in this way can become reductive, not because it isn’t, but because it is also operating within a system with its own logic, as different as that might be from our own. The circles within circles that the movie relies on communicate this; the Green Knight’s game, as odd as it is, is no different from plenty of the logics structuring the medieval world that require aging, death, and sacrifice as a part of life. Everything must end, but this realization doesn’t come easy; as Gawain himself says, “One year or a hundred—it would make no difference.”

And yet when The Green Knight ended, after a twist that reinterprets the original with devastating results, the descriptor that came to me most easily was tender. This is a movie with an immense respect for its source material that is nonetheless excited to take that material and run with it when given the chance. There is a kind of love for Gawain as an imperfect young protagonist, for whom shame and honor are intertwined, and for whom fame is a light that both lures and pursues him until the movie’s close. And there is an understanding that the weirdness in this movie’s bones can translate to a deeply moving story about the personal consequences of legacy, one that is unrelentingly solemn without being nihilistic or hopeless. Despite its journeys into the unknowable and untranslatable, The Green Knight always lingers on the living, even as it knows they can’t last forever.