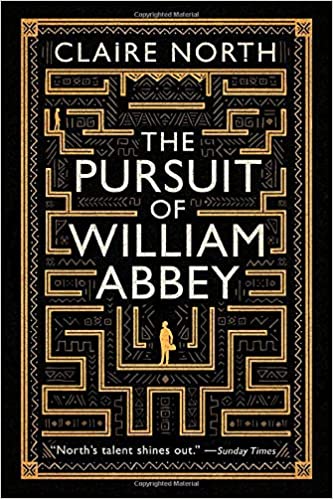 I have been a fan of Claire North (the pen name of Catherine Webb, who also writes under the name of Kate Griffin) since she published her 2014 story The First Fifteen Lives of Harry August. That was her novel about a man who reincarnates—but is reborn each time into the same life. Since then, North has published other science fiction novels, each with its own novum: a person who can transfer their consciousness from body to body at the touch of a hand; a man whose employer (Death) hires him to be with people just before they die;  a novel set in a dystopia where everyone’s life has been assigned a monetary value. All of these have been excellent works: thoughtful, well-written, and filled with dry humor.

The Pursuit of William Abbey fits neatly into this category. The novum here: a doctor, William Abbey, courts the wrong person, a rich heiress named Isabella. When he puts her in a compromising position, he is sent in disgrace to a British colony in Natal, in South Africa. Here, he witnesses any number of abuses by colonists, culminating in the lynching of a young man, Langa. Abbey watches the lynching without interfering, and indeed without feeling much concern. As Langa dies, Abbey is cursed by the boy’s mother. The curse takes the form of a shadow—Langa’s shadow—which pursues William Abbey ceaselessly. Each time Shadow Langa draws near, Abbey becomes increasingly compelled to read the truth in those around him, and to speak that truth. Thus, the name for those who are cursed: truth-speakers. (As more than one person in this novel notes, some truths must be spoken aloud to become real.) Should Langa catch up to Abbey, the person Abbey currently loves best in the world will die.

And whatever you love most is the thing the shadow kills. That is the first lesson of the curse that was laid upon me. (p. 43)

Just after Abbey is cursed, the shadow of Langa catches up with him, merges with him, and then re-emerges from the chest of his (now-dead) sister, back in England. Once the shadow leaves Carmine, the sister, it begins walking across the world, back toward Abbey again. Carmine is the only one in Abbey’s biological family whom he loved. He works out the terms of the curse from this, and from advice given to him by local sangomas (South African healers).

Two weeks before the shadow reaches him again, Abbey begins to be compelled to speak the truths he sees in his neighbors. Understanding that someone else he loves will die if Langa catches him, he flees on foot, unable to stop for more than a few hours. Eventually he is found and recruited by the Nineteen, a covert British intelligence group. In exchange for Abbey’s special skill-set (truth-speakers are valuable interrogation tools), the Nineteen promises to keep him moving, and thus keep him away from Langa.

The book begins near the end of Abbey’s story, in 1917. It is told from the point of view of a “Nightingale Sister,” a nurse, Sister Ellis, who has been stationed in a manor house in France, near the front lines of World War I. The house, which once belonged to a wealthy family, has been commandeered to serve as a hospital. Sister Ellis joined the Nightingale Sisters to escape the disgrace of her civilian life—she is in love with a woman named Matilda. This is an obvious parallel to Abbey’s disgrace, except that Sister Ellis, as it develops, actually loves Matilda. Abbey, as he has learned, never actually loved Isabella.

At this front-line hospital, Sister Ellis is treating horrifically injured young soldiers when Dr. Abbey shows up, claiming to have been “sent by HQ” (p. 1). She falls into the habit of drinking with him after their grueling shifts, and he begins to tell her his story. For about half the book, this is what we think we have in Sister Ellis—a narrative device, a convenient if clichéd way to transmit Abbey’s narrative. But as Abbey’s tale progresses, we begin to suspect, as Sister Ellis does, that something more is at stake. Abbey has come to this hospital for a reason.

The setting also seems at first to be a simple device. However, as the narrative develops, we come to realize that World War One, with its constant thunder of bombs, its horrific weapons, and its world-changing catastrophe, is a manifestation, so to speak, of Abbey’s own story, containing, as it does, on a much larger scale, all the horrific elements of his life and his actions. Furthermore, in her own way Sister Ellis is also a truth-speaker—she works in counterpoint to Abbey, both in this compulsion and in the events of her life.

As Abbey tells his story, we are increasingly appalled at his encounters with those who run the world. No ethos or morality controls these government agents and powerful capitalists, beyond gaining more power. There seems to be no abuse nor incidental cruelty, which gives any of them pause—indeed, the abuses they commit in order to gain more power, more wealth, are beneath their notice. The pain and suffering of others is, to them, a not-very-interesting by-product of achieving their goals, like slag from a mine.

Human beings, including the other truth-speakers Abbey meets as we move through the novel, are expendable tools for these governments and wealthy capitalists. Most of them, including Abbey (at first) not only accept this role but even seem content with it. A few exceptions include Saira, who is seen as a holy person in her culture in India, and Margot, who is a revolutionary.

When William Abbey first meets Margot, he, like his employers, accepts the monstrous nature of governments and capitalists as a given. This is just how things are, and thus just how things should be. However, once he does meet Margot, the truth-speaker he comes to love, his political awakening begins.

Margot is followed by the shadow of her infant child, Doireann, who died in an Irish workhouse. At first, Margot is interested only in seeking what solace she can through pleasure and the manipulation of others. But by the time she meets William Abbey, she has fallen in with a revolutionary group called the People’s Society. She becomes their truth-speaker; for them, she learns the secrets of the powerful, which are then used to blackmail these men into doing the will of the People’s Society: nudging governments and men toward a more just world.

As Abbey comes to love her, he also comes to believe what Margot does: that the current system of capitalism and colonialism cannot be saved. As he puts it,

[H]ere was I, a man … who was useful in my work only by the spirit of the African boy who had been lynched by the very system that I swore to serve. Even in death, I remained a tyrant, a cowardly, frightened butcher of Langa’s soul, transforming his life into nothing more than a tool to be used and discarded by powerful men … How to serve and yet be redeemed?

It was, I concluded, simply impossible. To serve the Empire that killed the child was to kill him again. Our Empire made its peoples nothing more than puppets and shadows to the white man’s story, and here I was doing the same. (p. 135)

Later, Margot loses faith in the People’s Society as well:

The woman I had met in Dublin, who laughed at her power and enjoyed the game—she was still there. But burning now beneath it all was a rage, an injustice, a passion … fueled by having tasted the pain of the poor man starving in the street as if it were her own, and having listened to the hearts of great men who would never, ever understand.

Margot Halloran believed in the battle she fought. And more than that, she had begun to believe that perhaps, in the manner in which she waged it now, it was unwinnable. (pp. 263-264)

Wounded by the Nineteen, Margot is unable to keep moving, and as a result her second daughter dies. That, for her, is the tipping point. She stops using the non-violent tactic of blackmail, and instead begins killing the powerful: a cotton grower in America who even after the Civil War kept Black people enslaved on his plantation; a Russian duke who raped women prisoners; a factory owner whose workers died manufacturing the chemicals that made him rich. Margot, who knows how to lay the curse, curses the children of these men, so that their entire families, and sooner or later they themselves, are killed by the child’s shadow.

Abbey’s own tipping point comes when he learns that his sole friend among the Nineteen, Albert Wilson, is experimenting on truth-speakers, using extensive brain surgery to destroy their personalities and free will in order to make them better tools for the Empire. Further, Albert plans to do the same not just to Abbey but to Margot—and plans to use Abbey to catch and stop Margot.

At this point in Abbey’s story, Sister Ellis realizes he is not in the hospital by accident. Albert Wilson’s son, horrifically wounded, is also there at the hospital, and Abbey has conceived a plan: he will curse the son, which (since the injured cannot run from their shadows) will invariably lead to the death of Albert, and of all his family. Abbey stopped Margot because she was cursing innocent children to punish their parents; yet he has come to the hospital to do the same. Sister Ellis must decide how, and if, she might stop him.

There is a lot to like about this book. For such a dark story, it has many flashes of humor. (For instance, every doctor William Abbey ever meets, from renowned physicians in London to the sangomas among the Bantu, has essentially the same advice—take long walks and get plenty of fresh air.) Yet it never flinches from the horror that it has to relate, the inevitable abuses of capitalism and empires. Abbey learns, and we learn with him, that there is no way for this system to be anything but cruel and destructive. There is no reform that will make either capitalism or colonialism ethical.

Also, both North’s language and her narrative technique are spare and clean, creating a directness to the novel which is compelling. Watching Abbey learn to understand and to use his skill at truth-speaking is satisfying. The landscape of the novel—as Abbey travels the world, being a tool for the Nineteen—is frequently beautiful. The cast of characters is enormous, but each is memorable and well-drawn. And the ending, as William Abbey comes to realize that the curse laid upon him is actually a blessing, is both a surprise and surprisingly satisfying.

As I noted at the beginning of this review, North creates compelling novels—lucid, compelling narratives. But beyond the sheer enjoyment of her writing, this novel is worth reading for what it has to say about the inevitable consequences of plutocracy—indeed, of capitalism itself—and the inevitable evil done in its defense. William Abbey’s plight, as he is caught between necessity and that evil, resonates for many of us, caught as we also are in such snares. North’s book does not provide a solution for this dilemma, but it does suggest that resistance is possible.

Like Loading...
© Copyright 2020 By: Kelly Jennings
About Kelly Jennings
Kelly Jennings has published short fiction in Daily Science Fiction, The Sockdolager, and Strange Horizons; her first novel, Broken Slate, was released by Crossed Genres Press. Read more about her at her blog, delagar.
No comments yet. Be the first!