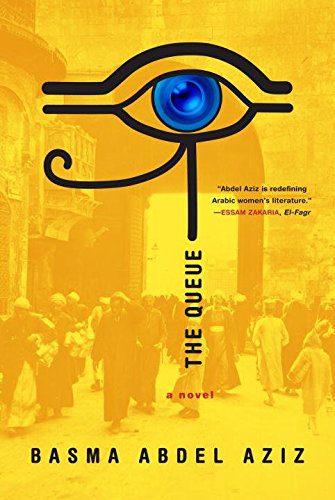 In Elias Khoury’s Sinalcol, a novel set in post-civil war Beirut, someone observes that the surest sign of the end of a revolution is “when those who had struggled started writing their memoirs” (Sinalcol, p. 357). If that is true, then does 2016-17, which saw the publication not just of Basma Abdel Aziz’s The Queue but also Omar Robert Hamilton’s The City Always Wins, mark the end of the Egyptian Revolution? Both Aziz and Hamilton were among those who “struggled” in the Revolution that began in 2011, the time and manner of whose ending—and the question of whether it has ended at all—continue to be disputed. Their works, although not memoirs but novels, are nonetheless deeply personal accounts of a time of extraordinary upheaval.

Both Aziz and Hamilton's novels possess a dirge-like quality, with the sense of loss—and of defeat—quite palpable, hanging over the words like a shroud. But there is also a desire to use words, and the novelistic form, to make sense of what happened; that, now freed from the “terrifying ambiguity of the present”, it is possible to look back and discover meaning in a past that was too chaotic while it lasted—or, if there is no meaning to be discovered, either to invent it, or to accept the Revolution’s meaninglessness. Perhaps it is overstating the case to say that, when those who have struggled take up the pen, all they can write is an obituary.

While The City Always Wins and The Queue are unmistakably written in response to the Egyptian Revolution, their manner of engagement is very different, and almost complementary. Hamilton’s novel, a thinly-disguised memoir, is set in the streets of Egypt between 2011 and 2014, where fictional characters mingle with real ones, and fictional lives intersect with historical tragedies, both individual and collective. In complete contrast to Hamilton’s concreteness, Basma Abdel Aziz’s The Queue is a novel in which the real world has been pared back into abstraction, events have lost their names, histories, and any identifying markers, and all signposts to the familiar have been conspicuously removed. It is almost as if a relapse into the concrete would distract from the novel’s primary theme, summed up aptly in the blurb: “the way that absolute authority manipulates information, mobilized others in service to it, and fails to uphold the rights of even the faithful.”

The Queue is set in an unnamed country, with only the names of its characters acting as geographical signposts: Tarek, Yehya, Nagy—all names redolent of the Arabic-speaking Middle-East. The country is ruled by the “Gate” (i.e., an actual, physical gate, which issues orders and directions through its proxies, and maintains discipline through a militia called the Quell Force). The Gate has assumed power after the internal disintegration of a successful popular uprising against the prior regime, referred to as “The First Storm,” and consolidated it by violently putting down a second uprising known as “The Disgraceful Events.” Now, all human life is subject to the rhythms of the Gate, which promises to open, but never does. And because nothing can be done without the sanction of the Gate, citizen-petitioners must queue before it until it opens, and their paperwork is processed. Over time, this queue—which gives Aziz’s novel its title—swells to monstrous proportions, creating its own mini-society and proliferating little economies—and continues to expand. Life is the queue, and the queue is life, with brief interludes elsewhere.

One of the queue's inhabitants is Yehya, a sometime student radical injured during the course of The Disgraceful Events. He is taken to the nearest hospital, where he has an X-Ray taken. The doctor, Tarek, realizes that there is a bullet lodged in Yehya's body, which can only be removed by surgery. Before Tarek can take action, however, The Gate decrees that no surgeries may be performed without prior clearance. As Yehya begins the long task of waiting in the Queue, and as his condition begins to worsen with each passing day despite the ministrations of his friend as well as his partner, Tarek struggles between the desire to stay safe and the call of the Hippocratic oath. When news begins to filter through that The Gate is denying that any shooting ever took place during The Disgraceful Events, and those who were injured with bullets to show for it are simply disappearing, Tarek is faced with a decisive, agonizing choice: to forget all that happened, or to treat Yehya and face the consequences.

There are many obvious models for The Queue. In The Gate’s totalitarian control over citizens’ lives, upheld through a combination of brute force and propagandistic doublespeak, and married to the unending bureaucratic nightmare that it constructs, Aziz’s novel sometimes seems like an obvious cross between 1984 (1949) and The Castle (1926). However, the novel that it is perhaps closest to in terms of form, method, and imaginative content, is Kossi Efoui’s recent, dystopian nightmare, The Shadow of Things to Come (2013).

In both The Shadow of Things to Come and The Queue, the writer’s response to the unspeakable horrors of reality is to embrace an austere, abstract minimalism. Both novels are set in nameless countries: although Efoui is responding to Togo’s violent transition to independence, the thinly apocryphal events of his novel could fit the post-colonial disintegration of any African nation; and similarly, although Aziz is very obviously writing in and about Egypt, The Queue would make sense if transposed into any Arab country, especially those in which the Arab Spring failed. In both novels, terrible events are reduced to cloudy euphemisms that deliberately mask what happened: the “Time of Annexation” and the “Frontier Challenge” in The Shadow of Things to Come, and The First Storm and The Disgraceful Events in The Queue. In both novels, a core feature is the regime’s weaponisation of language to construct an alternate reality. The rhetorical question in The Shadow of Things to Come, as the postcolonial regime prepares to clear a forest of its own indigenous population, is: “Haven’t the armies of Occupation left, taking the reviled word “war” with them?”  In The Queue, “the Gate” constructs an impersonal power that makes the very possibility of conceptualising resistance futile (how do you rebel against “The Gate”?).

Ultimately, in both The Shadow of Things to Come and in The Queue, the very form and shape of the novel is moulded by its subject matter: authoritarianism succeeds when it strips its subjects of context, robs experience of its concreteness and reduces it to a set of slogans, and achieves such a synthesis between language and reality, that there remains no space within language to conceptualise an alternate reality. In The Queue, this last point is driven home with particular forcefulness through an abortive resistance movement (labeled “the Riffraff”), which achieves initial success, but fails because it cannot “offer any convincing alternatives, so everyone in the queue—those behind the barriers and the rest—refused to give up hope. No-one was ready to leave without receiving the resolution they had come for” (p. 90). This passive acquiescence, that is moulded by a gradual closure of any possibility of action (what do you do when The Gate simply does not open?), represents the frightening way in which totalitarianism gradually takes over every aspect of life.

Aziz’s is an updated totalitarianism for the twenty-first century, where a private telecom company cooperates with both The Gate—to impose a mass surveillance regime upon the citizens of the Queue (originally achieved by offering free phone calls)—and a religious figure called “The Sheikh,” who justifies the regime and its depredations to the public. Even though all of this remains at a high level of abstraction (“the Sheikh” is never named, and neither is the telecom company), it is a clear indictment of how business and organized religion both find a ready home in a State that is turning itself totalitarian.

And what of the Queue itself, the eponymous lining-up of the novel? Here again, it is quite instructive that Aziz’s is not the first novel where queues play a central, almost constitutive, role; they do as well in Ngugi wa Thiongo’s The Wizard of the Crow (2006). Both queues are vehicles of heavy irony: “you are in the waiting room of history—so wait a little longer” was the standard justification that European colonizers gave to colonized nations when denying them independence throughout the twentieth century. Colonialism is over, but the wait continues; the logic replicates itself. This point has been made often by journalists and scholars. Aziz makes it in its own powerful way, through an SF novel that is both disturbing and unusual.

Like Loading...
© Copyright 2017 By: Gautam Bhatia
About Gautam Bhatia
Gautam Bhatia is based in New Delhi, India. When not at his day job as a lawyer and legal academic, he tries to lay hands on the latest works of historical and speculative fiction—with a particular taste for high fantasy and Orwellian dystopias—and read them from cover to cover. He has reviewed before for the Jadaliyya Magazine, and blogs about books at anenduringromantic.
One comment on “The Queue by Basma Abdel Aziz”
2017 in Books | anenduringromantic

[…] Basma Abdel-Aziz, The Queue (****): Another one on the Egyptian revolution – this one a dark, pessimistic tale about a “Gate” that comes to life and rules a nameless city, forcing people to form a never-ending queue about it. Instantly recognisable. (Reviewed here) […]