Non-Fiction, Reviews
Size / / /
The Terraformers by Dan Hoy with illustrations by Tristan McNatt
By: Josh Brown 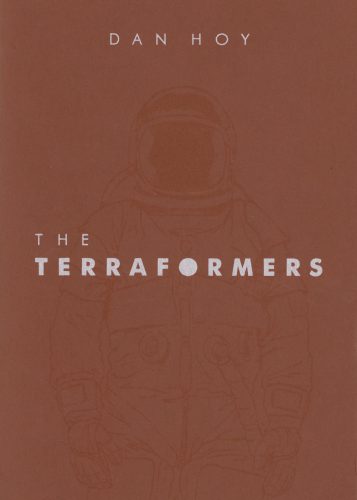 The Terraformers by Dan Hoy is a meditative chapbook of thought-provoking, minimalist, SF poetry. At forty-six pages, it can be read in about the time it takes you to finish a cup of coffee. However, once it's read you'll find you're not quite finished, as Hoy's chapbook offers much to dwell on and even more to return to. And like the astronauts within the book’s pages, you may find that history often lurks within new discoveries.

The Terraformers is the second title in the C chapbook series published by Third Man Books, which is the publishing arm of Third Man Records. Their first fiction release was When the World Wounds by Kiini Ibura Salaam, and the quality of this new release leads me to hope for more quality speculative fiction and poetry from this publisher in the future.

Indeed, fans of minimalist poetry will appreciate Hoy's mastery. However, unlike in some minimalist poetry, there is a distinct narrative within the pages of The Terraformers. The economy of words correlates with the narrative, which involves a crew of astronauts tasked with colonizing (i.e., "terraforming") an unnamed distant planet in some far-off solar system. They have to make do with what they have, which isn't much, and maximize their output. Hoy's poetry does the same.

Although we are in space, Hoy's words, sparse as they are, hold a certain gravity, and each poem settles down with the weight of pensive reflection. While the narrative can be dark, even bleak at times, the smattering of words on each page twinkle and shine like stars in the far-off cosmos. It's fitting to be in deep space when it is easy to find deep meaning in each of Hoy's words, in each line of the book. For example:

in our mutual
need for each other

There's so much being said in so few words and lines here. Hoy is describing the nature of the loneliness of the astronauts, who are isolated, abandoned, and alone on a strange planet so far from home. But in a way he's also describing a planet not so far away—Earth. If the human race is unable to put aside difference, come together, and work toward a greater goal, we're as good as doomed. It doesn't matter if those humans are on Earth or some undiscovered planet a billion light-years away.

Like any crew setting out on a mission, the astronauts in Hoy's narrative rely on each other. Each member has their own particular set of skills. No single crewmember would be able to do this mission on their own. Each member contributes, yet at the same time carries a burden the entirety of which they are unable to bear alone. The need for connection can at times rival the need for survival. At times, they can be one and the same.

I can't be with you
outside

without these
pressure suit layers

Outer space is cold, and so too are the inter-relationships of these astronauts, regardless of their mutual need for each other. Without the suit layers, there can be no life; but the layers separate those who wear them. Without the suit, there can be no warmth; but paradoxically, the suit also brings with it the cold emptiness of isolation. Zoom in to the micro-level view and it's easy to see that Hoy is also exploring the isolation and loneliness of our relationships with each other, and of self. On a deeper level, we as individuals tend to have a symbiotic relationship with our friends, our partners, and at times even our children.

Tristan McNatt's grayscale illustrations give the chapbook a feeling similar to that of a comic book, and the images offer more and more the longer you study them in conjunction with the narrative of the poetry.  In fact, the illustrations provide as much thoughtfulness and insight as the words do. The grayscale toning gives the reader a sense of how cold space is; how cold the astronauts' journey is. It's dreary, helpless, hopeless.

In addition to the poetry and illustrations, I need to address the book itself. Like the discoveries being made by the astronauts in the narrative, there are discoveries to be made within the chapbook as well. I did not figure this out until my third reading, but the poetry book actually doubles as a flipbook as well, with the planet's rotation taking place at the top left, and the phases stretching across an astronaut's visor on the bottom right. In fact, one might call the chapbook itself a discovery, an artifact to be assimilated, similar to the activities of the terraformers on their newly discovered planet.

In the end, the astronauts discover that they may just be repeating history, which as we all know is doomed to repeat itself unless we can learn from it. Make of this what you will, but again, it's easy to see the correlation with current events around the world:

Did we already
ruin

& have we now
returned

to die or
to live & make amends

so we
can ruin it again?

It's interesting that Hoy used science fiction to frame his narrative. The subjects of this sequence could have just as easily been exploring the Arctic in the 1600s, the western United States in the early 1800s, or anywhere else at any time that has been colonized and claimed. The fact that his characters are exploring outer space in an near or far-off future version of society speaks to how timeless the human cycle is. We keep going around and around, wheels spinning, and eventually make progress, but at what cost? How long will we continue to advance our society only so that we "can ruin it again"?

Like Loading...
© Copyright 2018 By: Josh Brown
About Josh Brown
Josh Brown is a writer of fiction, non-fiction, and poetry. His work can be found in numerous anthologies as well as in Mithila Review, Fantasy Scroll Magazine, Star*Line, and more. He served as award chair for the Science Fiction & Fantasy Poetry Association's 2017 Elgin Awards. A native of Minnesota, he tweets at @jedeyepatch.
One comment on “The Terraformers by Dan Hoy with illustrations by Tristan McNatt”
My Review of The Terraformers by Dan Hoy On Strange Horizons | Ninja Mind Control

[…] I recently reviewed poetry chapbook The Terraformers by Dan Hoy with illustrations by Tristan McNatt for Strange Horizons magazine. Check it out here! […]