Non-Fiction, Reviews
Size / / /
The Unspoken Name by A. K. Larkwood
By: Nicole Berland 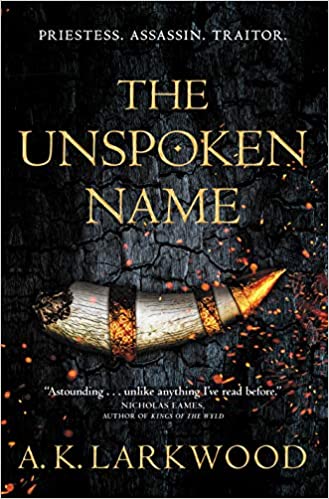 Chances are, given the timing, that if you’re reading this review you’re probably doing so at least in part because you wonder whether The Unspoken Name would be a good companion as you shelter in place. For anyone seeking either the customary comforts of high fantasy or a tasteful renovation of the genre, the answer, in brief, is yes. Blending conventions from both fantasy and science fiction (think priestesses, assassins, and mages in spaceships), A. K. Larkwood’s debut novel offers its readers something fresh, elegant, engaging, and, mercifully, long—a salve for these troubling times.

Although The Unspoken Name takes place across a network of discrete worlds, connected through an interstitial portal dimension called the Maze, it opens  on a scene of isolation even lonelier than ours—a House of Silence buried deep in the northern woods of a world called Oshaaru. In it, a fourteen-year-old girl named Csorwe (pronounced like “doorway”) awaits ceremonial sacrifice as the Chosen Bride of a god named the Unspoken One. Moments before her death, alone in a cavernous shrine, the enigmatic mage Belthandros Sethennai lures her into a new life as his companion and aide, with every subsequent moment of her existence stolen from her forsaken god.

Thankfully, Sethennai becomes neither love interest nor father figure. He is Csorwe’s boss, and what transpires between the two is a surprisingly nuanced account of professional mentorship and, ultimately, labor exploitation. In her years of apprenticeship, Csorwe distinguishes herself as a resourceful and courageous young woman, with the childhood habits of her religious piety reconfigured as loyalty to Sethennai. Still, this is a book that understands workplace dynamics, and as time passes Csorwe enters into competitive collaboration with Sethennai’s other subordinates and begins to build her own auxiliary relationships. Eventually, her competing allegiances force her to navigate the intricacies of betrayals both subtle and significant—an entry into moral ambiguity that marks her maturation into self-awareness.

Csorwe is an unlikely heroine. Grounded as this book is in the conventions of high fantasy, it might have more easily spun a yarn about its mysterious and powerful mage, Sethennai—an exiled magician-king looking to reconstitute the empire in his name. Instead, we get Csorwe, a damsel rescued from death who becomes a rescuer herself, a child bride who flees unflinchingly into the unknown, a fast learner, a good fighter, a plain dresser, practical, stoic, dutiful … oh, and gay. Actually, most of the characters are either gay or bisexual, and it is a testament to Larkwood’s craft that it only comes up at this point in the review. The Unspoken Name is queer without being about queerness—a lovingly executed homonormative epic that could only exist now, after so much work has been done to promote civil rights and social acceptance.

In 1985, queer comic book icon Alison Bechdel created a test to measure female representation in film—now commonly known as the Bechdel-Wallace Test. To pass, a movie needs nothing more than two named female characters speaking to one another about anything other than a man. That’s it. To this day, shockingly few narrative media meet even these modest criteria, and the implications can be insidious for women and girls. Representation matters. Being able to envision oneself as a hero is what makes people heroes. The Unspoken Name handily passes the Bechdel test, giving Csorwe a powerful female love interest, a formidable ally in a captive serpent queen, and a deliciously complicated villainess. It achieves a similar goal for queer characterization; in fact, close to none of the main characters are straight. Mainstream media tends to take gender, sex, and sexuality for granted (along with race, ethnicity, nationality, class, ability, and neurotypicality, but that’s a story for another review). What this means is that characters representing members of dominant groups tend to comprise all or most of a story’s cast, and that characters external to these groups tend to have their differences exploited as plot devices. The queering of Larkwood’s novel is so thorough that it is one of the least remarkable elements of worldbuilding or characterization, which also makes it one of the most powerful.

Beyond the broader benefits of representation, the inclusion of often underrepresented sexualities carries the tangential advantage of opening up space for the genre to do something new. We don’t have to accept the trappings of heteromasculinity as the best approach to problem-solving. Neither do we have to awkwardly distance ourselves from the latent sexism or pedophilia of what could have been low-hanging fruit—Sethennai waiting for Csorwe to blossom into a blushing maiden, for example. Instead, in shirking such expectations, the novel exhibits the atrocious absurdity behind many of these tropes.

When, for example, Csorwe returns as an adult to the shrine of the Unspoken One, she encounters the revenants of his former child brides. Dressed in the tatters of their ceremonial garments, their reanimated adolescent corpses gather around her with hollow eyes and faces shrunk against their skulls. Now mature and self-possessed, Csorwe is taken aback by how small and submissive they are, prompting a memory:

Sethennai had sent Csorwe once to the shallow lakes of Salqanya to harvest a certain anemone, a sensitive creature between flower and shellfish, with many fronds that moved in unison to taste the water. The dead girls reminded Csorwe of nothing so much as this. Appendages of some unknown and unknowable intellect. It was all of them. (p. 388)

Her emotional and temporal distance from this discarded destiny reveals it for what it is—tacit obedience to an ideology that delivers girls into fatal matrimony. Csorwe’s liberation from social and religious hegemony—“some unknown and unknowable intellect”—transforms this scene from one of fetishized violence against girls into one of shrewd negotiation between Csorwe, her repudiated god, and the priestess who still serves him.

In fact, all of The Unspoken Name’s thickly textured characters complicate the generic archetypes. The book’s heroes, love interests, and villains alike carry motivations that reverberate with unexpected purity. Take, for instance, the priestess Oranna—a villain whose crimes stem organically from her unadulterated religiosity. That she is dynamic and understandable doesn’t mitigate the savagery of her crimes, but it does illuminate some of the psychological intricacies of villainy. Female villains are too often painted as jealous, irrational, lovesick, or hysterical. While The Unspoken Name flirts with the stereotype of the jilted lover, when Oranna dismisses Sethennai as “forever and in so many ways, a disappointment” for whom it was “a mistake to waste much soul-searching,” we see her for her deeper qualities. Like every other character in the novel, she is practical, competent, and motivated by a higher purpose. Even stripped of its dazzling scenery and skillful worldbuilding, The Unspoken Name would be a smartly written story about smart people, whose conflicts, refreshingly, stem less from malevolence than from incompatible needs and desires.

Luckily, however, the book still delivers dazzling worlds for us to explore because, despite its novelty, The Unspoken Name is still firmly ensconced within its genre. Magicians, kings, mercenaries, revenants, sublime landscapes, interdimensional portals, rustic marketplaces—all the ingredients are here. Most exciting is the mechanics of its magic, which derives from a set of invisible deities, each patron of its own distinct world. Essentially prophets, mages channel small portions of the power of their patrons. This clever touch does a lot of work—solving narrative problems concerning the limitations of magic while creating the opportunity to draw parallels to human mythmaking and religious histories. What, after all, looks so different between magic and miracle except for the source of the tale?

This is not to say the novel is perfect. While it is undoubtedly an excellent debut, saturated with artful details, it nonetheless feels very much like a first book. Covering a decade and a half of Csorwe’s life, the plot proceeds in fits and starts, and the lacunae often yield character developments that feel abrupt and unearned. Occasionally its jokes, targeting a British audience, fall anachronistically flat (allusions to “pencil-sharpening wankers,” for example). Mostly, I find myself unpersuaded by one of Larkwood’s most deliberate elements of worldbuilding, which was to make none of the characters human. Csorwe and the other Oshaaru have grey skin and tusks, where Sethennai and others of his species have brown skin and long, pointed ears that can move independently of their heads. In a Reddit AMA, Larkwood discusses this decision:

… for me the whole point of fantasy is to get another angle on things that are ‘supposed’ to be inhuman … Queer people, people of colour, disabled and mentally ill people have been treated especially badly by the genre, I think because so much of what we are interested in in fantasy and science fiction is strangeness. … I wanted to write a fantasy world where humans were not the baseline, because I’m bored of seeing baseline humanity meaning a very specific thing …

Conceptually, I agree, Larkwood’s non-human characters are admirable, and they track with the way she so seamlessly incorporates queerness. Still, where the queerness has consequence by opening up opportunities for narrative innovation, the tusks feel more like a gimmick. As with the AMA interview, their presence feels like a hasty addendum, little more than “and they’re cool.”

Yes, there are minor moments where the tusks come into play—a torture scene, a fleeting reference to the mechanics of kissing (something I wondered about for most of the book). I also recognize that my take on the tusk may be unpopular; a brief glance at fan response betrays widespread delight with the device. Still, for such a thoroughly thoughtful entry into the fantasy archive, I kept hoping the tusks might become something more. Happily, Larkwood is currently at work on the second novel for this trilogy, so there’s plenty of time for the tusks to take priority.

These relatively minor complaints aside, the novel’s few shortcomings are easily overshadowed by its captivating prose. Consider Csorwe’s adult reaction to the Unspoken:

All of Csorwe’s shame and remorse were blotted out in an instant by terror of the divine. For the first time in eight years, she felt the true, close presence of the Unspoken One.

At first it was no more than an incurious tide of dark water. Once or twice it lapped at her, then receded, impassive. The absence was almost worse. Up ahead, the empty doorway yawned, and the Unspoken waited. (p. 386)

An incurious tide, a yawning doorway, terror of the divine—these evocative phrases typify the images and meditations that so successfully immerse the reader in Larkwood’s universe. If a lesser writer constructed this story, it would be a snack, but with a voice as strong as Larkwood’s it becomes a wholesome meal.

Overall, The Unspoken Name is a novel that does right by its readers. It courts, enchants, and trusts us. Navigating the balance between closure and intrigue, it feels healthy and hopeful without becoming cloying. Mostly, the book’s success is testament to the skillful conscientiousness of its author. For many of us, this unexpected entry into the broader corpus of fantastical literature should be precisely what many of us need right now—a vibrant scrap of color, a gratifying flight of adventure—for the lingering heartaches of this lonely time.

Like Loading...
© Copyright 2020 By: Nicole Berland
About Nicole Berland
Nicole Berland is an instructor and PhD candidate at UNC Chapel Hill, where she studies contemporary science fiction television seriality. Her writing has appeared in PopMatters, The Carolina Quarterly, IndyWeek, The Anarres Project, and several other publications. Visit her blog at experimentlife.space, or find her on twitter @nicwinnik.
No comments yet. Be the first!