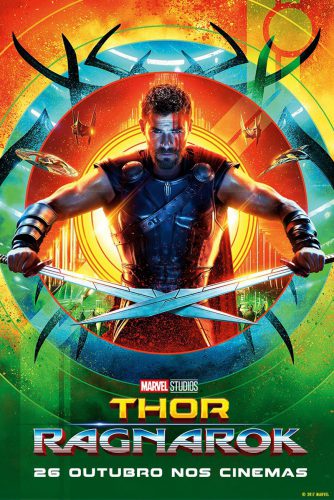 The positive critical buzz convinced me to see Thor: Ragnarok, but I went into the theatre with modest expectations. It wasn't just because the Marvel Cinematic Universe (MCU) films have reached the "more of the same" point for me, but also because I always considered the Thor films to be the weakest within this universe. The endless soap opera-like intrigues about the royal family of Asgard never managed to capture my interest; worse, they were spiced up with the recurring problem in the MCU of casting the female lead in the role of a babysitter for the protagonist, and topped off by some of the most embarrassing displays of CGI seen in any of the MCU movies (or, for that matter, in any recent blockbuster).

So I was surprised by how good Thor: Ragnarok turned out to be—and was even more surprised by how it overcomes the problems of the two previous films in the series: it simply tosses these problems away, officially carrying on the ongoing story of the series but effectively rebooting it and replacing it with a completely different story. The cliffhanger from Thor: The Dark World (2013) is resolved within the first ten minutes of Thor: Ragnarok; the protagonist's babysitter, we're told, has left (replaced with a far more interesting female lead later in the film); and the CGI finally looks good.

Thor: Ragnarok does, however, keep the one element that did work in the two previous films of the series—Chris Hemsworth's talent for playing a character in fish-out-of-the-water situations. After the above-mentioned ditching of the previous films' continuing plot, the narrative of Thor: Ragnarok begins with Thor (Hemsworth) failing to stop goddess of death Hela (Cate Blanchett) from reaching and taking over Asgard, and being thrown to the remote planet of Sakaar, where he is forced by Grandmaster (Jeff Goldblum), the local ruler, to fight an unbeatable champion in a gladiators' arena.

The scenes taking place on Sakaar compose almost all of the film's middle act, and they're easily a cut above anything seen in the other Thor films so far, and are among the best seen in any MCU film. Hemsworth's performance as the superhero who has trouble adjusting to his new surroundings is superb, contrasted by Tom Hiddleston's equally excellent role as Thor's brother Loki, who feels right at home in the new decadent location. Both are joined by Tessa Thompson, who steps into the role of the series’ new female lead, Valkyrie. She is a very welcome addition, a well-written and well-acted character who starts off as an easygoing Han Solo-type mercenary but quickly reveals a more complex Mad Max-like personality.

Goldblum also shines in a performance that manages to be both extravagant and also surprisingly relaxed, and the film even manages to render likeable a veteran MCU character (whose appearance hasn't exactly been kept a secret, but whose identity I’m withholding just to be on the safe side)—becoming the first film in this cinematic universe to succeed in doing so.

Other than featuring great writing, drama, and action, the Sakaar sequence features unique design—and this, I suspect, is where the design team and director Taika Waititi looked beyond American superhero comics, and found inspiration in Franco-Belgian science fiction comics.

In many scenes, the look of Sakaar, featuring a luxurious palace in the middle of a huge junkyard, bears more than a passing resemblance to the Alejandro Jodorowsky and Moebius classic The Incal not only in the inspiration it draws in the design of clothing and architecture, but also in its portrayal of a futuristic decadant society, one which holds itself in high regard with respect to standards of living while being completely blind to the moral atrocities it's responsible for. It gives the film a visual and thematic flavor that's different from anything we've seen so far in any MCU film or, for that matter, any other adaptation of American superhero comics.

Thor: Ragnarok leaves Sakaar for its climatic sequence, and here the film reverts into a more conventional mode, in which the protagonist plays hero, and the villainess plays evil. It's something of a letdown—despite being appropriately energetic, Blanchett's performance as the antagonist is no match for Goldblum's (I got a feeling that she just didn't have as much fun on the set), but, eventually, the film’s final act delivers. The action is exciting and well-handled, both in the physical and CGI departments (emphasizing, again, the poor job done with CGI in the two previous Thor films). Best of all, the end of Thor: Ragnarok opens a completely new ongoing plot for the protagonists, and I’m curious to see where future films in the MCU will take it.

2017 has mostly been a letdown when it came to popcorn flicks, but Thor: Ragnarok does an admirable job in this department. By Odin’s beard!

Like Loading...
© Copyright 2017 By: Raz Greenberg
About Raz Greenberg
Raz Greenberg divides his time between working as a content editor, lecturing on comics and animation in several academic institutes, writing reviews and articles for a variety of publications (Strange Horizons, Tablet Magazine, and All the Anime, among others), and writing fiction. He muses about overlooked genre classics at the Space Oddities Facebook page.
No comments yet. Be the first!