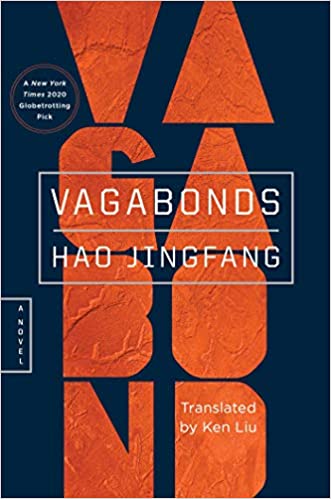 Two key themes in Vagabonds, Hao Jingfang’s first novel in English translation, are the difficulty of understanding another culture from within one’s own, and the difficulty of understanding one’s own culture from within it, too. Ironically, though, western promotion of this synthesis of two Mandarin Chinese novels (Wandering Maearth [2011] and Return to Charon [2012]) reinforces these themes in the worst possible way: that is, by downplaying Vagabonds’ philosophical content to match more familiar English-language expectations of space-faring SF. In consequence, a book that explores with great nuance how different social contracts play upon our perceptions of self, community, and freedom itself risks being lost to a cultural divide.

Granted, perhaps a western SF readership would be unsettled by a Chinese text that navigates western philosophical discourse with such ease, seamlessly interweaving names and terms like Adorno and Arendt, historiography and memory studies, Dostoevsky and Camus, within its 608-page meditation on capitalism, communistic socialism, and a wide range of artistic practices as intersecting forms of human expression. How many western SF readers are going to be excited to read possible critiques of capitalist society from a literary culture (Chinese) that is assumed by many Westerners to be less “free” and therefore more susceptible to propaganda?

But one tangible downside of instead spinning Vagabonds as the “genre-bending” story of a group of young people caught between the Mars they were born into and the Earth they experienced for five years is that some readers might think Vagabonds a very different tale. What struck me most about the promotional material, for instance, is that it focuses on one character in particular—a teen girl named Luoying—as our only POV protagonist. This marketing approach fits the individualist tendencies of, say, western YA SF, and its expectations for story format: a fantastical world, that is, which will unfold for us through Luoying’s eyes alone,and which will lead to some grand reveal about society’s seedy underbelly, followed by a take-down of current leadership.

Vagabonds, however, is not that sort of book—even if, at times, its teenaged characters entertain wildling theories in that ballpark (all of which are fairly quickly dispelled or mitigated; many of which arise in the first place solely due to Terran storytelling about Mars). This is not the sort of book, that is, where one needs to look beneath the veil of reality to be troubled by how a system works, and to struggle to find one’s place within it. Rather, Martian-citizen Luoying is joined by several other POV characters in routinely analyzing their social contracts, and in trying to understand how personal agency has been shaped by circumstances, both within and beyond their control.

And so we also hear from Eko Lu, a Terran filmmaker reflecting on commercial vs. collective art, as well as the struggle to surmount Terran biases during his time on Mars; and Dr. Reini, a Martian whose lifepath was sidelined for the greater good just enough to estrange him from a full enthusiasm for his culture’s supposedly utopic projects; Rudy, a fairly sexist older brother to Luoying, whose resistance to political reform changes when talk of revolution suits his own leadership aspirations; Anka, a fellow student struggling with his own ideas about individual and societal sacrifice; Juan, a man whose vision for Mars involves what he is convinced will be a swift and victorious strike against Earth; and Hans Sloan, the grandfatherly architect and leader of the Martian colony under the text’s direct scrutiny.

What this storytelling approach yields is a text wherein a wider range of characters have the agency to think critically about the systems into which they were born, the systems that they have sought to create since birth, and how best to negotiate their prejudices about other ways of being. Jingfang’s narrative structure also invites readers to observe how the revolutions of young people trying to find their place in the world are neither uniform, nor by any means the only revolutions ever in progress. In Vagabonds, rather, twenty young people are struggling with life in the diaspora in different ways, depending on how much each has taken Terran criticism of Mars as valid and what each regards as an effective means by which to change society; while, in the background, Martian culture is itself on the verge of transformation, with whole generations of citizens considering a risky new phase in their colonization project from different standpoints.

In practice, this well-rounded approach to narrative agency means that many of the issues raised in Vagabond’s promotional materials are either resolved early on, and/or fairly easily. Most of the time, Luoying asks questions and receives answers, and then simply needs to decide what she will do with the answers provided. Possible conspiracy theories are raised, yes—and then resolved, and not just through her conversations but also through POV sections involving other social actors. As such, most of the book’s drama arises less from actual revolutionary goings-on on Mars, and more from anxieties in the youth delegation that were caused by their exposure to Terran ideas about Mars. Is Hans Sloan, Luoying’s grandfather, a dictator? Were Luoying parents killed in a brutal plot to suppress revolutionary change? Is Mars a “free” world? Is Earth?

Now, it’s easy for a work involving two planets with disparate socioeconomic systems to seem a blatant corollary for East-meets-West commentary. In this case, though, the “East” of our era is lumped into this twenty-second-century super-capitalist future-Earth, while a smaller, more technically advanced Mars colony has structural features that shape its form of socialism with institutions, values, and citizen life-plans that do not perfectly match any state model on present-day Earth. Certainly, there are allusions that will remind readers of Tiananmen Square and North Korea, but privacy, for instance, is something that Martians are entitled to in a way that does not map at all to the most pressing concerns of twenty-first-century authoritarian states. Jingfang’s Mars colony, rather, is its own nuanced thought-experiment for how a functioning communistic socialism, entirely removed from traditional capitalist pressures, might look in a century’s time.

What these narrative choices also amount to, then, is the construction of an SF story less concerned with shocking twists, and more with being able to articulate plainly the underlying mechanisms and motivations of different socioeconomic and political positions: both so that readers can reflect on how art is by no means a distinct category of human expression, and so that readers can see the immense “ground” of fundamental human behaviour that even seemingly diametrically opposed sociopolitical systems share.

Luoying and the other youths’ journey through the text, then, is less one of overt revolution and more one of building a mental Tower of Babel that can synthesize superficial cultural differences into a more cohesive understanding of human striving. One of Luoying’s clearest observations to this end arises during a conversation about the difference between art created so that it can be shared, and art created through consumerism. After considering a proposed contrast between her friend’s interest in innovating with designs that anyone can wear (through Mars’s approach to open-source production), and Terrans’ greater interest in buying clothes (which have been artificially price-jacked so as to create an identity-narrative for the purchase), Luoying realizes that:

Whether designing clothes or buying clothes, the fundamental impulse is the same. They can’t choose the world they live in, or how that world operates, but they want to live their own lives, to find out who they are. That is all. (p. 175, ebook)

And yet, for all Luoying’s gradual movement toward this harmonized way of seeing Mars and Earth, Vagabonds also suggests that there are critical differences between both cultures’ abilities to attain such narrative synthesis—which suggests why this whole story, with its highly sincere sociopolitical discourse, is playing out primarily on Mars, not Earth. As Luoying at one point observes, while the capitalistic Terrans love to shop and party:

A ten-year-old Martian child knew Aristotelian logic, Hammurabi’s code, the Jacobins and the Bourbon Restoration … Martians worshipped great ideas, art, and invention. Every Martian asked themselves: Why am I doing this? What value does this action contribute to the progress of civilization? (p. 121, ebook)

For the Martians, thinking seriously about personal action also means dispensing with most hierarchies between subjects. As one colony elder explains, “Every form of expression is a language: perception, logic, painting, science, dreams, proverbs, political theories, passion, psychoanalysis—all are ways to articulate the world. As long as we still care about the form of the world, we must care about every type of language. Language is the mirror of the world” (p. 188). Consequently, Vagabonds talks with great seriousness about dance, theatre, film, fashion, writing, research, philosophy, morality, painting, history, the politics of revolution and oppression, colony design, class, career strategies, the meaning of happiness, marital politics, and reparative justice.

(Indeed, Vagabonds talks of so much with great care and nuance that some common gaps in Chinese SF, such as a paucity of discourse about women outside of rigidly heteronormative gender roles, may seem jarring to western readers.)

Suffice it to say, then, to call Vagabonds “genre-bending” does a disservice to readers, as well to an essential reason for translating SF from other contexts in the first place. Hao Jingfang, author of the Hugo-Award-winning novelette, “Folding Beijing,” has in this behemoth of a novel laid out a coherent, comprehensive, compassionate, and wholly inviting future-world through which to explore some of speculative fiction’s most common themes in a highly philosophical manner. It is simply up to the English-language reader to decide if they’re comfortable following such a discussion outside the sociopolitical and narrative structures more familiar to western SF tales.

Like Loading...
© Copyright 2020 By: M. L. Clark
About M. L. Clark
M. L. Clark is a Canadian immigrant to Medellín, Colombia, and a writer of speculative fiction, reviews, poetry, and cultural essays.
No comments yet. Be the first!