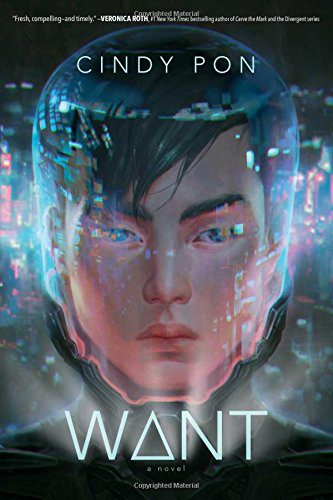 As someone who grew up reading science fiction, it was a weird and vertiginous moment when the future caught up with William Gibson’s novels and he started writing about our present moment. Something similar has happened in Cindy Pon’s Want, a “near-future” YA science fiction novel where the dystopia is all too believable because it’s already lurking just around the corner.

Set in Taiwan, Want follows Jason Zhou, a mei (have-not) petty criminal with his sights set on loftier goals than mere larceny. Jason and his friends—hacker Lingyi, cat burglar Iris, smooth grifter Victor and budding crackerjack biophysicist Arun—have hatched a plan to prove that the powerful Jin Corporation, which makes the environment suits that prolong the lives of those who can afford them, is also responsible for the pollution that makes the suits necessary in the first place. Their hope is that making this fact public will allow the Taiwanese legislature to pass stiffer air pollution controls, a remarkably pragmatic goal, though the plan evolves into one in which they decide to blow up the Jin servers that maintain the suits (no cloud backups here), forcing their you (have) owners to unseal their helmets at last.

The book opens in one of Taipei’s many night markets, where Jason kidnaps a you girl in order to extort her rich parents for the funds to bankroll the plot. Only when he’s insinuated himself into the heights of you society months later does he realize that he managed to abduct Jin Daiyu, only daughter of the company’s president. Needless to say, this coincidence is not the only thing that doesn’t go as planned, and it’s all made even more complicated when Jason and Daiyu, who’s named for a famous heroine in Chinese literature, begin to develop feelings for one another. Unfortunately, Jason is supposed to be getting close to her solely to obtain her access codes to the Jin Corporation systems, so that he and his friends can hack them.

Want is an interesting departure for Pon, whose previous four novels were all YA fantasy with female protagonists set in fictionalized versions of ancient China. This novel is based on a story that was originally published in the Diverse Energies anthology (2012), a collection explicitly written with the goal of putting people of color into YA apocalypse stories. I remember it as uneven (why was the title drawn from a JFK quote?), but Pon’s story “Blue Skies” was one of the standouts. In the intervening five years, however, the YA dystopia genre—so prominent at the time that “X is outlawed and the government controls Y!” was actually going around as a parody meme in certain internet circles—has lost a lot of steam, for reasons that I hope are obvious. It’s less fun to read about these kind of societies when you can see their beginnings happening in real time via the internet every day.

The world of Want definitely feels like one that could be starting now, or perhaps already has: residents of cities in China and India are no strangers to literally life-shortening air pollution, and neither are members of marginalized communities living next to polluted sites worldwide. The day after I finished the book I flew to Salt Lake City, which has its own problems with air quality; I saw lawn signs that simply read CLEAN AIR NOW. As William Gibson himself has remarked, “The future is already here, it’s just unevenly distributed.” Aside from flying cars and mopeds, there isn’t really much in the book that doesn’t seem like it’s only a matter of time until everyone experiences it in the here and now, whether it’s the proliferation of deadly diseases due to a lack of access to medical care, or the hyper-inequality of a world even more explicitly structured to benefit the 1% than our own. As Twitter pundits have pointed out ad nauseam, if you were born after approximately 1965, you weren’t promised flying cars in your future; you were promised the cyberpunk dystopia of Blade Runner or worse.

I very much enjoyed Pon’s previous novels, but I also enjoyed the way her writing style has evolved to fit the tone of this one; it’s tauter and punchier and compulsively readable, as befits its con/heist plot. Want does not have the most innovative of plots, the soupçon of forbidden romance between Jason and Daiyu notwithstanding, and it also lacks particularly memorable villains. Daiyu’s father is the kind of boring corporate type who makes up in money what he lacks in charisma, but that doesn’t make his criminal control of the Taiwanese government, or his diabolical plan to stoke demand for a low-cost environmental suit by deliberately spreading a new weaponized influenza strain, any less evil. In the age of Martin Shkreli and Travis Kalanick, moreover, the understated Jin profiteering is almost refreshing: at least we, the readers, aren’t subjected to nauseating pabulum about disrupting the whatever via a killer app and the exploitative labor practices that support it. I’m of the opinion that this kind of rapacious greed is its own moral condemnation, and there’s a way in which Pon’s straightforwardly setting out the stakes of her story is refreshing. Some issues really are that clear-cut. (Here’s looking at you, Exxon-Mobil, and your forty years of climate denialism!)

Instead of its plots, the strength of the book lies in the world it draws and the characters who fill it: though he plays with knives and rock climbs incessantly, Jason (we never find out his Chinese name) also reads old books and quotes literature with Daiyu, making him an atypical YA bad boy hero to say the least. Daiyu herself is an interesting mix of conscience and power, and it’s not hard to see why Jason likes her. His friends, who recall the squad from Leigh Bardugo’s Six of Crows duology (2015-16) ever so slightly—though any sufficiently large criminal enterprise is going to need a certain set of jobs done—are also an intriguing mix of damaged young people, and along with Jason himself are a mix of backgrounds and races, from the Indian-Taiwanese Arun to Lingyi and Iris, who are in an understated but explicit same-sex relationship. The fact that all of them are Asian is never made a particularly large fuss over in the book, but a story of this kind featuring an entirely non-white cast is automatically compelling in the current political (and publishing) environment. Representation matters.

The details of you culture, in which spending a good chunk of your life in a helmeted, climate-controlled environmental suit is the norm, were also believably and interestingly worked out: Jason initially kidnaps Daiyu because her suit is decorated with a Hello Kitty design done in real gemstones, signifying her greater net worth even though the style is less gaudy than her friend’s. Fad body modification, always a favorite future dystopia trope of mine, also makes an obligatory appearance (making Jason’s drunkenly getting a genuine tattoo somewhat unusual), and fad pets such as bioluminescent fish have also made the jump from science blogs to night market stands, pushing the near future-ness of it all even further.

The other element that makes Want come alive is its vivid depiction of its setting, the Taiwanese capital city where Pon was born. I’ve never yet made it to Taipei, and Want left me sadder than ever about that fact, despite the acid rain and the air pollution and the destruction of famous tourist sites such as the Yangmingshan park in the book, and even despite the flying cars: Pon keeps the narrative low to the ground, vividly portraying the back alleys, night markets and street life of the city. Happily, her trademark descriptions of food, which have made my mouth water since Silver Phoenix (2009), are still just as good as ever. This isn’t any kind of faux Taipei that could be mistaken for the Los Angeles of Blade Runner, or even Hong Kong; from little details to large setpieces, the place is emphatically itself, and emphatically the home that Jason loves:

Getting off a few stops early, I walked the rest of the way. No matter how tired I was, I could never tire of the vibrancy of this city. The crowds were thinner tonight, and those who braved it wore thick masks covering their faces. But vendors were still doing business on the streets, doling out fried dumplings, meats grilled on skewers, fried leek cakes, and cups of rice noodles in broth. I grabbed a bag of candied sweet potatoes cooked in sticky syrup, finishing it before I entered the 101 through a private entrance, then immediately crawled into bed. (p. 270)

The first of a duology, Want manages to achieve a satisfying ending that nonetheless sets up some interesting potential directions for its successor. Pon also keeps a few tricks up her authorial sleeve; some tables are turned while others are just overturned. By the end, the hope that animates Jason and his fellow conspirators doesn’t feel unearned: though problems can’t be fixed overnight, it’s not too late for things to change. In this day and age, it’s hard to ask more from a novel about the future, especially one that doesn’t flinch from the harsh realities of the present.