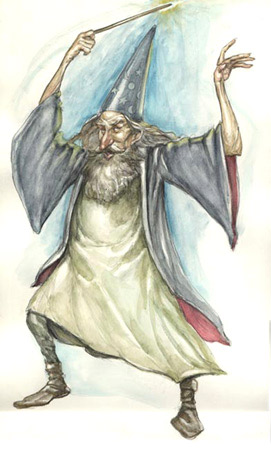 Fernando Molinari was born in Argentina on November 19, 1963. His entire life has been dedicated to illustration. Painting has become a way of exploring and expressing himself in several ways. He is self-taught, and currently works for several publishing houses and advertising agencies in his country and abroad. He also teaches illustration, graphic specialties and plastic art. He has illustrated several books (including Anne Rice's Lasher), art magazines, CD covers and comic books. He is well known for his illustrations for the books Magic Beings and Fantasy Art (in Spanish).

His artwork has been on exhibition in various art galleries and museums, including the Museum of Modern Art in Buenos Aires, as well as selected galleries and cultural spaces in the United States. He received first award for his exhibition in 2002 at Leprecom 28, a Sci Fi and Fantasy Art convention in Phoenix, Arizona. He was also a member of Henderson Art Association in Nevada. He has appeared on various television programs, including Much Music in 1999, to present and discuss his artwork as well as demostrate several techniques.

You can view more of Fernando's artwork at www.fmolinari.com.ar, and he can be contacted by email at fernandomolinari63@yahoo.com.ar.