After his brother died, Hitoshi Watanabe quit his job and decided to walk to the hot spring waterfall at the end of the world.

His friends told him he was crazy. "You're fifty-three years old. You're not going to get another job."

"My brother died of overwork," Hitoshi answered. "I don't want that to happen to me."

He packed a bag with a few clothes, a sleeping bag, his camera equipment, and his father's photo album and set out on foot from Osaka. The journey would have taken a few hours in a plane, but a pilgrimage demanded a journey on foot. After two months he reached the edge of Honshū and took a ferry to Hokkaido. He continued walking towards Shiretoko, the peninsula in the island's northeast. It was summer, and he filled his camera's memory cards with photos of green meadows and fields of lavender.

Shiretoko's original inhabitants, the Ainu, had referred to the peninsula as the end of the world. Hitoshi's father had told him it was where secrets went to hide. Hitoshi had always wanted to visit, but the demands of work meant he had never managed to find the time.

When he finally reached the national park, he waited until dark and then walked down the path leading through the woods to the hot spring waterfall. The park was closed for the day, but it was easy to bypass the gate.

His flashlight illuminated a sign hanging from a rope stretched across the trail:

Closed due to bear sightings.

Did bears come out at night? Still, he had come this far. He slipped under the rope and continued down the path.

The sound of running water came from ahead. The trail emerged from the woods and he looked up at the side of a rocky hill. A narrow waterfall trickled down the side of the rock, splashing into a pool of water.

His father claimed the water here was the most amazing color he'd ever seen—a vivid blue-green he'd dubbed Hokkaido green.

The water looked inviting, but since it was dark, it was hard to judge the color. He undressed and stepped into the pool. The water was warm and he let its soothing touch wash over his body.

He caught a glimpse of his reflection in the moonlight. He hardly recognized the gray-haired salaryman who peered back at him, a cubicle samurai who had devoted his life to doing the bidding of his corporate overlords.

A cluster of specks of light appeared near the edge of the woods. Had the park rangers noticed his presence?

A brown bear entered the clearing. It walked upright and carried an old-fashioned miner's lantern filled with fireflies. It waddled towards the pool, looking less like a predator than like an elderly sumo wrestler tottering uncertainly towards a bout with a reigning champion. It stopped near the edge of the pool and bowed.

It would have been impolite not to return the gesture, so Hitoshi stood up and bowed as well.

The bear stooped down and put the lantern on the ground. It fumbled with the straps on Hitoshi's pack and started rummaging through the contents.

"I have some tinned tuna," Hitoshi said.

The bear ignored him and continued to search through the pack. It took out his cell phone and tapped awkwardly on the screen. It walked to the edge of the pool and held out the phone.

The bear had written a message in hiragana. Hello.

Sorry I use hiragana. I never study kanji.

Bears cant talk. The bear put the phone to the side and eased itself into the hot spring.

The bear had dark eyes, and its scraggly brown fur was dotted with patches of gray. The two of them sat in silence for a couple of minutes. Then the bear leaned over the edge of the hot spring and grasped the phone. How can I help? it wrote.

You look for secret?

"How do you know that?" Hitoshi asked.

The bear tapped its nose. You smell like man looking for secret.

Hitoshi took a moment to compose his thoughts. "When I was a boy I used to listen to my parents talk with customers in their ramen restaurant. We lived in a small town and most of my friends were expected to take over their family businesses."

Hitoshi's father had been a giant of a man with bushy eyebrows and shaggy hair. "I'll be happy if you work in the restaurant after you graduate from high school," he had said to Hitoshi and his brother. "But I don't expect it. You're both smart boys. If you want to get a job in the city, that will make me proud too."

Hitoshi glanced across at the bear. It seemed to be listening intently.

"My brother and I moved to Osaka for university. We both got jobs with big companies. I developed image processing software for a camera manufacturer. Two years ago my father called me."

Hitoshi's mother had died a year earlier and his father had sounded old and tired. "I'd like you to come and visit, Hitoshi. I want to teach you how to cook tonkotsu ramen. It's my best dish."

"I'm sorry, but things are really busy at work. We have a new camera due to start production next month."

"I have an important job, Father. My colleagues depend on me. I'll be home next month for New Year's."

Hitoshi was going to say goodbye, but his father cleared his throat.

"Have you started making black and white cameras yet?"

Hitoshi sighed. His father had been a talented photographer but refused to use anything except black and white film. "I've told you before," Hitoshi said. "Cameras are digital now. You can change the settings so the photos are color or black and white."

"Colors are like dreams," his father replied. "If you try and reproduce them, you'll only be disappointed."

Hitoshi looked across at the bear. "My father died a week later."

"My brother died this year. I don't have any family left now." He scooped up some of the water and let it run through his fingers. "I want to know my parents' recipe for tonkotsu ramen," he said.

"My parents' tonkotsu ramen was the best. People used to come from other towns just to eat it. Can you find the secret of how to make it?"

I can sniff out secret. But you give me something.

The bear shook its head. Photos.

Not just album. All photos. You won't be able to take any more photos.

Cameras no longer work for you.

Photos and memories were all he had left of his family. "Why do you want my photos?"

Hitoshi waited for the bear to explain more, but it had stopped writing.

"Is there anything else I can give you?"

The bear shook its head.

"I don't mean to be rude, but I hope you're not going to tell me that to find the secret I have to look within myself or something like that. I'd prefer something more practical. Like the exact recipe."

Hitoshi stepped out of the pool and dried himself. He took out the photo album. "Is it all right if I have one last look?"

He took his time and savored each of the photos. His father's photos from Hokkaido. His mother on her bicycle holding a rose in her teeth. His brother at his high school graduation ceremony. A photo of himself when he was six years old and ready to take on the world. And his favorite photo above all: his family standing together in front of their restaurant.

After his father died, the restaurant had been turned into a convenience store.

He handed the album to the bear.

When he returned to Osaka, all of his photos were gone. He tried using different cameras, but the screens went blank whenever he tried to take a photo.

He followed the recipe the bear had given him. The noodles were even better than he remembered. He used the last of his savings to open a small restaurant opposite the train station near his apartment. He was surprised to find how much he enjoyed cooking. Ingredients were like colors. Depending on how you mixed them, you could produce subtly different results.

Word spread about his ramen, and the restaurant was always busy. A cooking show sent a reporter to cover the restaurant that people claimed made the best ramen in all of Osaka. After that, there was always a line of waiting customers. But sometimes when the sky was the right shade of blue, Hitoshi hung a sign on the restaurant's door:

Closed due to bear sightings.

He sat by the edge of the river and thought about his family. But he couldn't remember the sound of his brother's voice, the lines of his mother's face, or the color of his father's eyes. 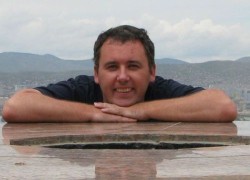