Click here for the podcast, or listen to it below: 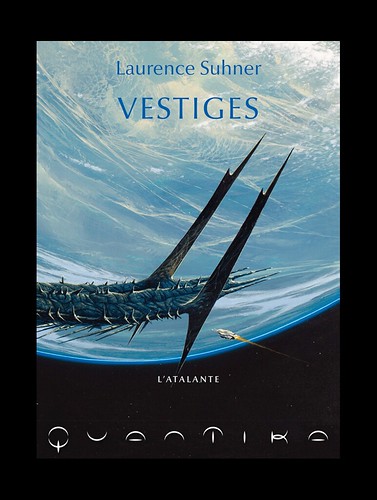 This week, we are pleased to bring you a short extract from Vestiges, the first volume of the Quantika trilogy by Laurence Suhner, a space opera that begins 300 years in the future on an icy extra-solar planet. Published in Switzerland and France in 2012, Vestiges has not yet appeared in English. You can also read an interview with Suhner by Alastair Reynolds here, and find out more about the Quantika books on her website.

The drivers returned to their machines, shovels, trucks. Everyone knew what they had to do. Haziel climbed up the ladder that led to the Hercules cab, three metres above the ground. The gigantic snowplough snorted. Thirty-two tons of psychrolite metal polymer, two articulated arms, each five metres long, rows of caterpillar tracks with a traction capacity of 600 horsepower, 512 kilo-newtons of tearing power. A mean machine.

In the distance, the rescue crew was still busy. Haziel was counting on their professionalism. Taking care of the wreckage was more than enough for him. Nothing but steel and composite materials, no flesh, no bones, no blood! His work started when theirs ended. Cleaning up what was left of the tankers, quickly clearing access to the transponder road. He continued to hope that the route would be changed one day. A simple little detour to the west would prevent a great many problems. But the Gemmian companies had neither the time nor the money to enlist engineers and make field surveys, or even to set up new beacons. No doubt, he would have to settle for aiding the auxiliary workers for many long years. That’s the way things worked here. On a tight budget.

The other two Hercules set off. Slowly, they rolled up the gentle slope that led to the site of the carnage. The bitter odour of the smoke seeped into the cab, mingling with that of charred human flesh. Haziel felt nausea well up. He regretted having inflicted Kya’s latest creation on his stomach.

The snowplough approached the edges of the crater. About 50 meters in circumference. It would take until nightfall to clear the area. A rescue worker, wearing orange coveralls, signalled him to remove a burnt out vehicle, peeled like a carrot. It looked like a satellite that had fallen from orbit. The other two machines were directed to identical piles of smoking debris.

Haziel couldn’t help shuddering. He’d never seen anything like this. The memory of the explosion he’d felt this morning through the thick walls of the base pierced through his bones.

The Hercules moved closer to the wreck. It had been thrown into the air—to an altitude Delaurier considered inconvenient—before falling back several metres from the edge of the crater. He would have to proceed cautiously. The ice had been transformed into a black, gelatinous looking mass. Nothing to be too happy about. The arms of the mechanical shovel spread with the unsettling grace of a marionette. Its claws closed around the remains of the tanker, ready to carry it off in no time at all to the transhipment trucks which, in turn, would carry it to the Tchenkoville depot, a dozen or so kilometres to the south, where it would be recycled.

Haziel just about swooned. Upon contact with the claws, the tanker disintegrated into a very fine dust, as black as soot. Anthracite sand that was now flowing over the ground with a hiss.

He interrupted his operation.

It was just plain unthinkable.

It wasn’t enough that the tankers had got into the unpleasant habit of exploding with their cargoes, something that was completely impossible given the confinement measures in use. As if their double hull and the nitrogen gas barrier—which made it impossible for the liquefied gas to react with the oxygen in the air—had suddenly disintegrated. . .

He remained motionless on his seat for a moment, distraught, jaws clenched. He would have to clear things up. Quickly, he slipped out of the cab, cast a worried glance around. Once he was assured that no one was paying any attention to his actions, he walked over to the tanker remains. The air reeked of melted psychrolite, and other residues, which he refused to think about. He pulled the collar of his parka over his nose then took a small box out of one of his pockets. He passed the laser tester over a portion of the wreck. The compound, which had once been a leading edge material, created by nanotechnology to endure the extreme cold of Gemma, was crumbling under the assaults of the wind. Unthinkable. Such structural modifications could not affect this type of polymer.

His brain overheated with the most implausible ideas.

The device purred a second, then uttered a significant beep. Haziel glanced at the results. As expected, it was impossible.

Increasingly anxious, he watched the Hercules snowploughs and the trucks dance their ballet on the ice. Everything started to spin. He took a few steps back, his nausea intensifying, and ran into the claws of his vehicle. He had to grab onto it, just long enough to get his bearings, then he repeated his tests. The measures were just too preposterous.

Another purr, another beep.

Device in hand, he raced back up into his machine. Once in the shelter of the cab, he waited, hands clenched on the controls, unable to decide what to do. The loudspeakers barked with the confused exclamations of the extractors. The tankers were literally crumbling when touched by the mechanical shovels.

Feverish, Haziel read the results yet again. There was absolutely no doubt about it: the isotopes of the polymerized steel that made up the tankers had collapsed. In other words, they had been altered by the passing of time.

Psychrolite wasn’t supposed to undergo that type of deterioration before. . .  what? A few thousand years? Even more?

For now, Haziel wanted only one thing: to run away. Anguish washed over him, more terrifying than ever. He had to talk to Stanislas right away.

But, first he had to finish his job.

He summoned up his courage, directed the claws of the Hercules toward the wreck. More rustling. The metal flowed like sand. Entire chunks of the tanker were dissolving as he tried to catch them and the blast of wind was spreading this infection over the sparkling expanse of the Glacier. What a horror!

After several unsuccessful attempts, he managed to grab onto something solid. A piece of the machine that had resisted the gangrene. As gently as possible, he took it to the snow removal trucks and got rid of it in a frightening cloud.

At the same time, an armada of vehicles appeared along the perimeter. Finally . . . reinforcements. The crew could start filling in the crater. The road would be open for traffic the next day. For more accidents. There might be an investigation . . . .But that was no certainty. As long as the economy didn’t come to a total standstill. . .

A glance at his watch revealed that it was already 11:30. Stanislas was waiting for him, to discuss his future mission. That was fine. He jumped down from the running board and joined the other workers. He needed a good smoke, to help him recover from his discovery. The faces of the men who had gathered under the awning of a mechanical shovel were filled with horror. No one was talking. They looked nervous, superstitious. People would be thinking hard, this evening, in their homes.

Once it was loaded, the first truck shifted into gear, not far from their small, distraught group. A piece of metal, poorly stowed, fell heavily to the ground, projecting shards of ice over several metres.

Haziel leapt back. Something had just struck his leg.

A charred human head, sliced off sharply at the neck, observed him from blackened eye sockets.

Around him, the blast of wind slowed.

Mira followed close on the heels of Alta in the autumn sky. It looked like the start of a beautiful day.