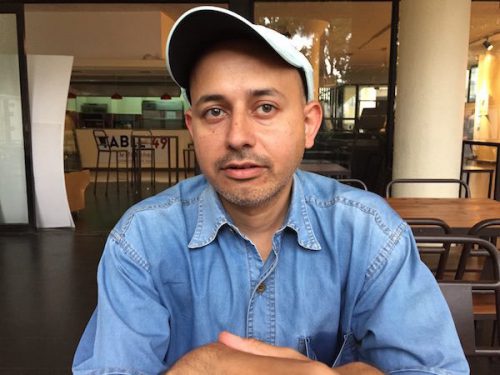 Cephas and Erabus are squeezed in the crowd. There is bad breath and aftershave here. Shoulders rub against each other and there is warmth in the ice-cream wind. Cephas steps out of the crowd and walks into the road, into the rain and in between cars that are stuck in a jam that will be measured in half days. He looks at the sky and what he can see. It’s not gray, it’s not blue but it has headlines all over. It’s black and white. They are floating in the sky. The skyscrapers are reflecting them but who knows if it's an optical illusion because in the crowd they are all reading The Daily Nation and Standard on their iPhones and the echo effect in the sky escapes them. Blind spot.

—From “Elephants Chained to Big Kennels” published in African Violet and Other Stories: The Caine Prize Anthology for 2012

Mehul Gohil is a stone cold science fiction fan whose brilliant writing style has ended up corralling him into the literary mainstream of African fiction.

Like Clifton Gachagua and Shadreck Chikoti, he is one of the SFF writers selected for Africa 39, a collection of work from the thirty-nine best African writers under the age of forty. He was long-listed for and invited to the workshop attached to the Caine Prize of 2012. He’s tiny, thin, tough, and talks like a character out of Martin Scorsese’s film Goodfellas.

He is breathtakingly direct about a previous wave of mainly West African writers.

“I wouldn’t consider them African writers. They are more like white writers in the language and structure of the stories. Nigerian writers all sound like they were born to one mother. Kenyan writers are born to different mothers—they all sound different: Wainaina, Clifton, me, Moses, Alex.

“There are many good writers but they go away and live abroad. If you stay away from Nairobi for more than three years, you lose touch with language and culture going off. If you leave to go live in the diaspora you really won’t know. The dynamics are changing so fast. You are going to be out of date quickly.”

He himself is a native of Nairobi and writes like one—his stories are stuffed full of details of Nairobi streets. And his non-fiction, too—for proof, follow this link to an article about hunting books in Nairobi.

“My great-grandfather was Indian but when I go to India I feel a stranger. Many Indians have been here for generations. Gujerati is an African tongue.”

There is soon to be a bonus language issue of Jalada, and “Farah Aideed Goes to Gulf War” is being translated into Swahili by Barbara Wanjala. Mehul can speak Swahili but not write it.

“Technology makes the local language thing more current and interesting. It offers more ideas about how to save local languages but also how to publish them or use them. English by itself looks binary. People in Nairobi speak a fusion of languages.”

He gives an example from his own story “Madagascar Vanilla” of how a mix of languages can lift monolingual texts. The story appears in the second Jalada anthology on technology and sex, Sext Me (Jalada 01).

“People are always saying that sex is like the ocean. I wanted to make it more like space, with water from Enceladus. I needed a word for the sound of an airplane. I couldn’t find a good one in English, but it was there in Swahili, from the Arabic—zannana. An airplane zannanas.”

Mehul got into writing late. He started in 2009 with a story about chess. He was playing for the Kenyan National team, and has a FIDE title. (Indeed, a month after my visit he would win the 2016 Nairobi Open Chess Tournament.) To please his girlfriend, he entered a Kwani? writing competition called "Kenya Living". He wrote the chess-themed story in five hours and submitted on the deadline day, not expecting to win. The story, “Farah Aideed Goes to Gulf War,” won the competition; you can read the full story at the link. His writing began to attract a lot of attention, going to the Caine Prize workshop in 2012 where he wrote his first SF story and on to the 2013 writing workshop where the core of the Jalada collective met.

“We hardly knew each other but we turned out to be a powerful force individually and collectively. We had all these old guys making the decisions and we wanted publishing control. We said let’s run something. We had a long discussion over emails. We had people from all over Africa and even the USA involved.”

“I had read a lot of SF since I was a kid. The others weren’t that interested at first, until I kept on writing and sending emails and in the end most of them went along with it. It turned out to be the most important issue after the Language issues.”

He acknowledges Sofia Samatar, who acted as an editor for the anthology. “She edited the pieces that got through the selection process, and really helped publicize this issue. Nnedi Okorafor and her are the first women on the moon. But I wonder what follows when a million Nairobi women have also been to the moon.”

“When I was ten years old the mall had a secondhand bookshop. It was my birthday and my dad said pick what you want. I wanted big thick books, not the picture books. The first books I picked up were Philip K. Dick, Samuel Delaney, and Fritz Leiber. I really thought Leiber was good and I understood Dick even as a kid. I liked that in Dick no one is surprised by the new technology—it’s normal and everyday. The spaceship lands and no one cares. Right now I love Ann Leckie, Alastair Reynolds, and C.J. Cherryh.”

He enthuses (like others on this trip) about Nikhil Singh’s Taty Went West, a SF novel that premiered at the Africa Futures events, published by Kwani? “It’s a kind of cyberpunk but it keeps pulling forth fresh stuff with fantastic prose style and a wild imagination. It’s going to be big, just excellent.” He takes me on a Nairobi book hunt but it turns out that Tatyhas sold out, even in Kwani?’s offices. He tries to give me one of his copies.

Mehul is very proud that Jalada publishes poetry as well as prose. He namechecks Shailja Patel and Stephen Derwent Partington, and goes on to say, “That means Jalada publishes something unique—science fiction poetry.” When I point out in the interests of accuracy that there is a long American tradition of science fiction poetry, I feel a bit mean.

“Nigeria had some groundbreakers a while ago. But Leakey says human beings won’t evolve any more because we travel too much. We don’t live in isolated pockets so we don’t branch out into different streams. We become too homogeneous. Nigeria is one big family; it has become too homogeneous—everything written there sounds the same. Nairobi is isolated and evolving in our own terms. Nairobi people just want to be different. I must be different from every other family. Nairobi women must be different from other girls, they must do something different with their hair or fashion.”

I don’t think it’s just Nigeria that has become homogeneous—it’s the world. Middlebrow lit fic in standard English is prevalent wherever publishers want to sell to a world market. Mehul doesn’t speak of the SFF bomb being set off in Nigeria by Chinelo Onwualu and Fred Nwonwu through Omenana magazine. Nigerian diasporan author Tosin Coker not only writes science-fantasy trilogies in English but children’s books in Yoruba.

Nairobi is nearly a mile high. It’s cool and rainy, without mosquitoes for much of the year. It has an international airport but otherwise it’s quite difficult to get into—matatus from the country queue for hours in its narrow streets. The world’s books are now downloadable onto smartphones, but Mehul and other Nairobi writers grew up in a formal, old-fashioned educational system in which beloved books were trophies to be hunted. It’s entirely possible that it’s cooler to be a reader in Nairobi than in many places.

I think Mehul’s right that Nairobi is evolving its own distinct stream. I wondered why I felt so at home in Nairobi with these writers. I think it’s because they remind me of New Worlds magazine, a product of London in the '60s, a bit of a backwater, where a bunch of talented people cut off from American fandom and its SF magazines happened to coincide and started to publish themselves, crossing SFF with the experimental literature of a previous time.

Like Loading...
© Copyright 2017 By: Geoff Ryman
About Geoff Ryman
Geoff Ryman is Senior Lecturer in School of Arts, Languages and Cultures at the University of Manchester. He is a writer of short stories and novels, and science fiction and literary fiction. His work has won numerous awards including the John W. Campbell Memorial Award, the Arthur C. Clarke Award (twice), the James Tiptree Jr. Memorial Award, the Philip K. Dick Award, the British Science Fiction Association Award (twice), and the Canadian Sunburst Award (twice). In 2012 he won a Nebula Award for his Nigeria-set novelette "What We Found." His story "Capitalism in the 22nd Century" is part of Stories for Chip, edited by Bill Campbell and Nisi Shawl and published by Rosarium.
2 comments on “Mehul Gohil”
Strange Horizons - Tendai Huchu By Geoff Ryman

[…] is one of Zimbabwe's most famous poets and novelists and something of a hero for Mehul Gohil and Clifton Cachagua, interviewed in Part […]

[…] did her undergraduate studies. At that time, her MA was going to last for another two years. Like Mehul Gohil in Kenya, Denise became a book […]