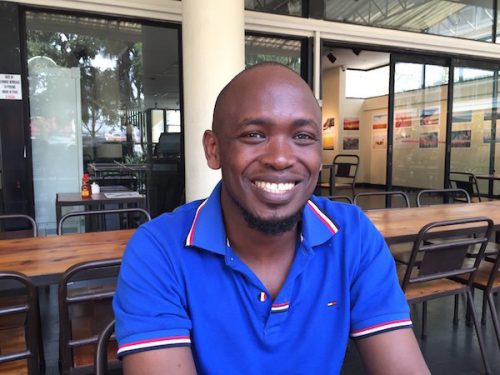 One day they will all know that I am Princess Sailendra of Malindi. They will know that that palace on the rocky ledge at the corner of the beach is mine and that it is made out of coral and red marble. They will know that my bedroom inside the palace is scented with jasmine and lit with rose scented candles and that the window faces the east so that I can be woken up by the sun. They will know that in the morning I only have to snap my fingers and all these male servants with rippling muscles and washboard abs will carry me to my bathroom and lay me in sudsy water; they will feed me grapes as they rub honey all over my body. One day I will just close my eyes and march Hitler-style across the beach and they will part the way for me. They will say “kwisha leo, Sailendra is among us” and faint on the shore. Afterwards they will scoop my footprints, pour the sand into glass jars and display it in their living rooms. One day.

—From “Princess Sailendra of Malindi” from Lusaka Punk and Other Stories: The Caine Prize Anthology 2015

Jane Johnson was my editor at HarperCollins. She’s the woman who for years steered the Tolkien legacy through success after success. As Jude Fisher she wrote a series of fantasy novels drawing on everything she had learned as an editor. And they are Kiprop Kimutai’s favorite books.

“I love the Sorcery Rising series. I think her language is beautiful and I love that heroines are not beautiful.” He used to go to book exchange clubs and find fantasy fiction when he could—through them he’s become a fan of Guy Gavriel Kay, of Stephen King’s The Dark Tower, and of course George R. R. Martin.

But his earliest exposure to SFF was not through comics, or shows on TV but through programmes and books on ancient kingdoms and history—Egypt or Great Zimbabwe and their mythologies. He loved reading about kingdoms and imagining life in them or reading about their gods or myths of origin.

He especially loved the Aztec civilization. He read Gary Jennings’ Aztec series: “He used the authentic technology of the Aztecs, but didn’t get into the mind of an Aztec, but sounded like an anthropology professor.” Kiprop found Aliette de Bodard’s Obsidian and Blood more convincing and imaginative.

“It’s fantasy I burn to write,” he tells me. Instead, he keeps getting drawn into writing mainstream fiction.

He was a runner-up in the Kwani? manuscript prize after Nansubuga Makumbi’s Kintu. “So my novel The Water Spirits is going to be published by them. It’s almost a fantasy novel. A boy believes that if you catch and hold a water spirit she will bring good fortune. But he captures and holds a real girl instead. It’s being edited by Ellah Wakatama Allfrey and will be out this year. Being edited by Ellah is eye-opening.”

He was selected to attend last year’s Caine Prize workshop in Accra, Ghana, held before the award ceremony in Oxford in July. The story he workshopped there, “Princess Sailendra of Malindi,” was anthologized in Lusaka Punk, the Caine Prize anthology for 2015. It was then reprinted with luxurious illustrations in Msafiri—the in-flight magazine of Kenya Airways.

It’s another mainstream story about fantasy—a young heroin addict imagines she is a beautiful princess of a distant land. The yearning to be a beautiful princess in a lovelier body reminds me just a bit of a transsexual imaginings. The heroin addiction makes the whole story hallucinogenic with a layer of almost religious imagery laid on top of a story of a lost brother and ruined lives, with a drug addict sage.

In an in-flight magazine. Life is so much more interesting when literature is not trapped in genre.

Another one of his stories, again traditional belief realism grew out of a famous workshop. “Evening Tea with the Dead” was first published in A Handful of Dust: Stories from the 2013 Farafina Trust Creative Writing Workshop, (2013, Kachifo Farafina).

Kiprop is a founding member of Jalada and suggested the theme for their first anthology, Jalada 00—insanity.

His story in that issue, “The Gentle Man from Iten” is lit fic—you are meant to work out character and backstory from what you shown. Why are people being quite so cruel to an insane woman who has wandered into Tala’s store? Why is every one so angry at Tala for being too nice? Especially his wife?

If you are not Kenyan, it will take you a while longer to work out the context—Tala is Kalenjin-Kikuyu mix, the insane woman is Kikuyu and it is the 2008 election when the two peoples are slaughtering each other. But Tala remembers his Kikuyu grandmother, who sang a beautiful song about loss.

Kiprop’s mainstream work yearns towards fantasy. In one uncanny moment for both us and the gentle Tala, the insane woman sounds like she just might be possessed by the spirit of his grandmother.

“The Gentle Man from Iten” is available to read online, along with the rest of the first Jalada anthology.

“I am an ethnic Kalenjin but I don’t speak that language in a sustained way, I was always speaking in English or Swahili, and never sustained myself in one continuously. My grandparents would speak nothing but Kalenjin for weeks at a time. My mom was born in 1948, my Dad two years before. In the village people wore skins, worshipped the sun. Western clothing, education and Christianity came in during my grandparents’ lifetime. They witnessed a world that died, a catastrophe that no one invited in. We have now made English our own language, and are making new languages.

Our English is influenced by Swahili, our lingua franca. Kenyans’ love of African cinema means expressions from Nigeria are arriving. Kenyan English is getting expressions of its own like ‘help me a pen’ instead of ‘Can I borrow your pen please?’”

The Afrofuture(s) anthology came after the anthology on insanity and a second about technology and sex called Sext Me.

“Afrofuture(s) was about our people imagining alternative realities for the future. For example, Africans as colonizers. For us the oceans never belonged to us.

“Again, it was a difficult edit. It was often hard to work out what the ideas in the stories were, hard to work your way into the world. It’s the science fiction writer’s job to make us believe and understand.”

Kiprop is a very friendly, complex person. He has made English his own; he is part of a concerted effort to revive local languages. To me, he talks about his love of generic fantasy. In Jalada 00, he describes himself as “a writer haunted constantly by his ancestors who demand to have their stories written” and says his favorite writer is John Steinbeck. He has a list of all the agents in England or the USA he wants to target.

I talk to him about an interview I did with Tade Thompson, Biram Mboob, and Chikodili Emelumadu back in London. I’d suggested to those three writers that much of African SFF was about resolving the contradiction between traditional beliefs, Christianity, and science. Chikodili laughed at that and said that for Nigerians, there was no contradiction—the different belief systems co-existed.

And he is hard at work on a three-volume epic fantasy novel.

Like Loading...
© Copyright 2017 By: Geoff Ryman
About Geoff Ryman
Geoff Ryman is Senior Lecturer in School of Arts, Languages and Cultures at the University of Manchester. He is a writer of short stories and novels, and science fiction and literary fiction. His work has won numerous awards including the John W. Campbell Memorial Award, the Arthur C. Clarke Award (twice), the James Tiptree Jr. Memorial Award, the Philip K. Dick Award, the British Science Fiction Association Award (twice), and the Canadian Sunburst Award (twice). In 2012 he won a Nebula Award for his Nigeria-set novelette "What We Found." His story "Capitalism in the 22nd Century" is part of Stories for Chip, edited by Bill Campbell and Nisi Shawl and published by Rosarium.
2 comments on “Kiprop Kimutai”

Fascinating. I haven't read African SFF except for the Tanzanian writers' workshop stories.