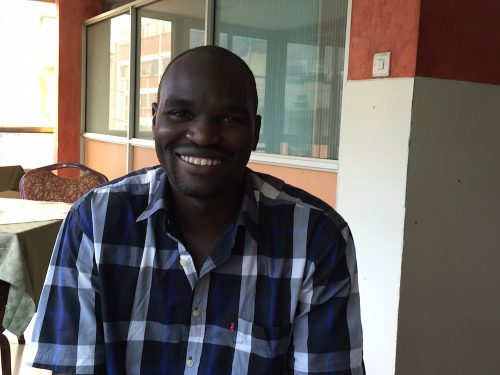 With Kwani?, Jalada, the Story Moja festival, Fresh Manure, and so much else happening, Nairobi has become an arts pull for all of East Africa.

While I was there Dilman Dila also visited. He’s the author of one of Africa’s first single-author SFF collections, A Killing in the Sun (the lead story was shortlisted for the Commonwealth Fiction Prize!). He dropped by and ended up staying at the Decasa Hotel as well.

Dilman makes a living as a screenplay writer and filmmaker. He’d just finished a documentary about the making of Queen of Katwe, directed by Mira Nair (the director of Salaam Bombay!) and starring David Oyelowo and Lupita Nyong’o. With the money from that documentary, Dilman financed his next self-directed feature film, Her Broken Shadow.

His interview with me is reserved for later in this series, after I’ve been to Uganda to see the scene there for myself. So more from Dilman later.

My good fortune in Nairobi was to have Dilman vouchsafe to my tablet the first cut of Her Broken Shadow. Seeing it contributed potently to my impression of Nairobi.

We adapt Philip K. Dick novels and turn them into action movies. Dilman’s movie is a sophisticated piece of metafiction that crosses Philip K. Dick with Samuel Beckett, alternative realities and monologues.

Her Broken Shadow is about a woman in a near East-African future, trying to write a novel about a woman in the far future—who is writing a novel about her. The two women are played by the same actress, but with such different ways of moving and being that it takes some people (me and a couple of others) a while to notice. 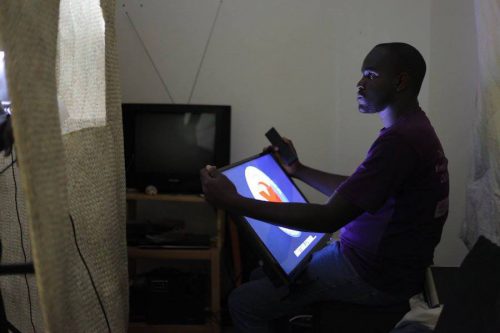 Dilman Dila on the set of his film Her Broken Shadow

Fiction that is about fiction—especially when the shattering revelation is that we are reading a story (Really? I had no idea!)—is possibly my least favourite genre. I was knocked out by the film’s ambition and integrity.

SPOILER: The genius of the thing is that there is a good, plot-level SF reason why they end up in each other’s novel. If Dilman had scripted The Matrix, I might have believed it. And just when this story seems all sewn up, the very last scene overturns everything again, and we hit rock bottom reality.

It is about being alone. It’s a satire on writing workshops. It’s a vivid stand for the future being African; it’s a philosophical conundrum; it’s a two-hander for one actress, each character locked claustrophobically but photogenically in a small location talking essentially to herself. There is a murder. Or are there two murders? Or none? What’s imagined?

It also has the best hat in the history of cinema. 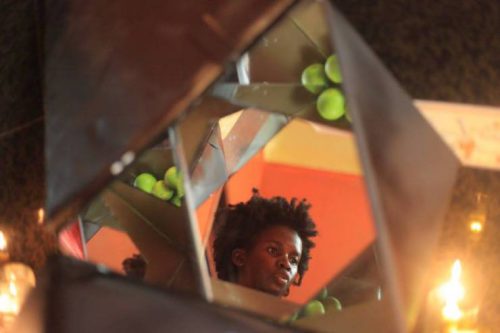 Another auteur-film by Dilman—not a fantasy—is the eighteen-minute, Hitchcock-like What Happened in Room 13. It’s the most watched African film on YouTube.

Like Loading...
© Copyright 2017 By: Geoff Ryman
About Geoff Ryman
Geoff Ryman is Senior Lecturer in School of Arts, Languages and Cultures at the University of Manchester. He is a writer of short stories and novels, and science fiction and literary fiction. His work has won numerous awards including the John W. Campbell Memorial Award, the Arthur C. Clarke Award (twice), the James Tiptree Jr. Memorial Award, the Philip K. Dick Award, the British Science Fiction Association Award (twice), and the Canadian Sunburst Award (twice). In 2012 he won a Nebula Award for his Nigeria-set novelette "What We Found." His story "Capitalism in the 22nd Century" is part of Stories for Chip, edited by Bill Campbell and Nisi Shawl and published by Rosarium.
4 comments on “Dilman Dila”
Strange Horizons - Introduction: Meeting Kintu's Children By Geoff Ryman

[…] local leader is Dilman Dila, who frequently works with FEMRITE and whose literary-SF movie Her Broken Shadow was featured in […]

[…] I tell her how much I like the story’s spectacular end-of-the-world finale. Innocent then praises Dilman Dila’s collection, and I talk about Dilman’s film Her Broken Shadow. I then ask if she’s read a lot of […]

[…] Dilman Dila was my main contact while I was in Uganda. We’d met before in April 2016 in Nairobi, where I’d seen the SF film he wrote and directed, Her Broken Shadow. The film knocked me out—I wrote about it in the Nairobi chapter of this series. […]