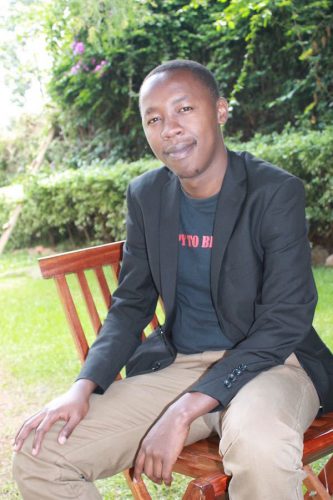 I dismember grasshoppers
eat their frosty limbs,
hop over the carcasses of cars.
Yes, I need to migrate,
spread this plague, complete the
latitudes they have mapped on my vessels.
Collages of organs:
lying on the grass, I watch myself on Mars.

—From The Cartographer of Water (Slapering Hol Press)

Meja Mwangi, last seen here a long time ago, disappears into Sabina Joy with an amputee prostitute who offers him an hour’s worth of conversation in Gikuyu—no longer spoken here—for ten times the normal rate. She holds his hand tight and smiles like two moons, blush on the cheeks. He disappears inside her, never to be seen again. Some people will stalk his grave and spend fifty years waiting, fasting, praying. Cyborgs will find them there and eat their intestines alive. Alive. Pick, roll, unfurl them in their hands like cashew nuts. He will never come back; the sons will never come back to their mothers. The mothers will have forgotten they have sons.

—From “No Kissing the Dolls Unless Jimi Hendrix is Playing” from Africa 39, edited by Ellah Wakatama Allfrey

The story appeared in Africa 39 and is called “No Kissing the Dolls Unless Jimi Hendrix is Playing.” It doesn’t make any sense, at least conscious sense, but it rings true because it comes direct from the subconscious, like Alice in Wonderland or Miyazaki’s Chihiro. Only it’s sexy, queer in the most profound sense of tapping into the source of sexuality, and of course, it thrills to Nairobi in all its energy and occasional cruelty. It is an example of what Clifton calls “the continuous fictional dream.”

His being selected for Africa 39 means Ellah Wakatama Allfrey and Binyavanga Wainaina considered Clifton to be one of the thirty-nine best African writers under the age of forty. He’s also the winner of the Sillerman Award for new African poets. This resulted in his first poetry chapbook The Cartographer of Water being published by Slapering Hol Press in the USA with support from the African Poetry Book Fund and many other bodies.

His poetry is tinged with fantasy and SF imagery, as is his short prose fiction.

He’s a fan of the Beats and the Dadaists, the Surrealists, and modernists like the rediscovered poet H.D. He recited a chunk of the opening of Alan Ginsberg’s “Howl.” And he is devoted to a strand of Kenyan writing, a wilder and more experimental tradition than much of African writing. This goes back to his first experience of books.

“I came into reading by a weird way. I was eleven years old, a dreamy kid. It was after catechism class in the evening at Holy Trinity Catholic Church in Kariobangi. I was passing by the dispensary—mission churches would build a retirement home or something, this church had a dispensary—and I found a green paper bag there with novels inside, but they had all come apart at the seams. They were big books, but they were all mixed together. There was a novel by a Nairobi crime writer John Kiriamiti, and the book Going Down River Road. The third one was about Kiriamiti’s girlfriend My Life with a Criminal: Milly’s Story. He writes about fucking her but in her point of view and I got such a hard on. I confused all the novels as one. It’s why I can’t write traditional narrative. That was my first time into prose getting so excited, finding these things so beautiful, so Kenyan, so Nairobian.”

Meja Mwangi is a character in “No Kissing the Dolls” and that story is set in part on River Road.

“Going Down River Road is one of the definitive texts of my life. I’m very concerned about class and privilege in Nairobi. I don’t know where it comes from. Mwangi made the city possible for me, possible to think of it as a character, to think of downtown Nairobi as a kind of possible place, made a kind of consciousness possible. Nairobi spans miles, but the Nairobi of the 70s and 80s belongs to River Road and the town centre. I do have a kind of love-hate relationship with Mwangi. I am critical of the idea of Nairobi existing in such a small space. Nairobi is huge, there are all kinds of people who live outside downtown. A lot of people confuse Nairobiness with Kenya-ness but they are not the same thing.”

Another hero is the Zimbabwean author Dambudzo Marechera. He is the author of the award-winning story collection House of Hunger and the dense, allusive novel Black Sunlight, which was banned in his native country. That novel’s mix of rage, depression, violence, self-hatred, and self-destructiveness is toxic but overwhelming.

Gachagua says, “I like his poetry better. Marechera was way ahead of his time. In poetry I can’t see any equivalent to him. A lot of people talk about his prose and his life, how he fucked around and fucked up. I don’t care about that biographical stuff. I fell in love with his poetry and his prose. He made a certain kind of African collectiveness possible.”

Collectiveness is a key theme of how Nairobi writers behave—Jalada, the Nest, World’s Loudest Library, Manure Fresh … and of course Kwani?. Gachagua works for Kwani? alongside its main editor Billy Kahora.

“My friends want to kill me. It’s the best job in Kenya. I help with poetry, I do a lot of the commissioning work, structural edits, administrative work and maybe I will work on a poetry anthology. ”

He is also one of the founders of the Jalada collective.

“We all met at a workshop sponsored by Kwani?, the British Council, and the Commonwealth Institute. It was taught by Ellah Wakatama Allfrey, Nadifa Mohammed and Adam Fouldes.

“We needed an alternative to mainstream voices. We were all born after 1985 and we all studied here. We are not returnees from the diaspora, we had not been students in the West or South Africa. The farthest I’ve travelled is to Uganda or Tanzania. It wasn’t a rebellion, it was about possibilities; possibility means more to me than rebellion.

We knew we had voices, we were desperate to get published and to collaborate as well, but we had such few places to do to that. We asked why don’t we establish our own space? One of the fundamental ideas was peer review, don’t just accept or reject but how you can improve the work. So come together and review each other’s work.”

He is at work on a surrealistic novel but says that after that he will focus on poetry.

“I’ve always been interested in the nonsensical, especially the nonsensical body, the body not making sense, the body mangled up. It’s subconscious and I haven’t examined it enough. I’m still in a place to be really honest, I don’t actually believe I’m a writer. I’m trying to work my way to being a writer so thinking about the subconscious. It’s a lifetime thing, this finding out.”

Like Loading...
© Copyright 2017 By: Geoff Ryman
About Geoff Ryman
Geoff Ryman is Senior Lecturer in School of Arts, Languages and Cultures at the University of Manchester. He is a writer of short stories and novels, and science fiction and literary fiction. His work has won numerous awards including the John W. Campbell Memorial Award, the Arthur C. Clarke Award (twice), the James Tiptree Jr. Memorial Award, the Philip K. Dick Award, the British Science Fiction Association Award (twice), and the Canadian Sunburst Award (twice). In 2012 he won a Nebula Award for his Nigeria-set novelette "What We Found." His story "Capitalism in the 22nd Century" is part of Stories for Chip, edited by Bill Campbell and Nisi Shawl and published by Rosarium.
2 comments on “Clifton Gachagua”
Strange Horizons - Ray Mwihaki By Geoff Ryman

[…] by Jalada or Kwani? but have stories that don’t fit, less polished stories, we want a rawness.” Clifton Cachagua says, “If you want the most experimental writing in Nairobi, then get Manure Fresh, the […]

[…] is one of Zimbabwe's most famous poets and novelists and something of a hero for Mehul Gohil and Clifton Cachagua, interviewed in Part […]