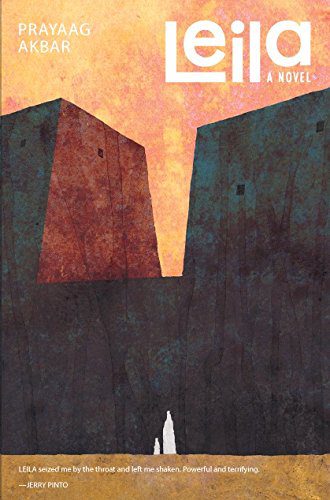 What happens to a nation when its fragile social contract, clumsily stitched together with threads of violence and patches of persuasion upon a fabric of social apathy, begins to fray under the stresses of its own, rapidly accelerating, contradictions? Among other things, perhaps, it becomes a fertile ground for imagined dystopias. For the last few years, writers of SF have mined India for their increasingly bleak near-future worlds. Ian McDonald’s River of Gods (2004) imagined a balkanized country, torn apart by water wars, religious violence, and techno-utopianism gone terribly wrong. Monica Byrne’s The Girl in the Road (2014) constructed India as a neo-Imperial power, locked in a battle with China in a twenty-first-century scramble for Africa, and featured a bridge that spanned the Indian Ocean. Anthony Trevelyan’s The Weightless World (2015) conceived India as the testing ground for a revolutionary anti-gravity machine. Anil Menon’s Half of What I Say (2016) predicted a silent coup by a militarized "anti-corruption" government unit, coupled with the advent of the chaotic "super Wi-Fi" technology, designed to connect every corner of the vast country to high-speed internet.

Stylistically and even substantively very different, these pessimistic visions of near-future India are nonetheless united by an attempt to explore the impact of disruptive technological and social changes upon a vast and riven community. Prayaag Akbar’s Leila, published at the end of April 2017, might seem, at first glance, to be a straightforward addition to this burgeoning tradition of the "dystopic Indian novel." Shalini, the novel’s protagonist, grows up in a city that is gradually being cut up into segregated sectors by sixty-feet-high walls, each sector governed by its own strict rules of conduct, of births, deaths, and marriages, and of eating.

In a bid to escape the cloying sectors, Shalini, her husband Riz, and their daughter Leila move to the "East End," the only unwalled—and "free"—neighbourhood remaining. However, you cannot stand outside the world: the East End is soon overrun by the forces of "purity and order," driven by violent outrage in which acute water shortages, nostalgia for a past golden age, and the perceived "loose" lifestyle of the East End are all mixed up with each other as causal factors. Shalini is forcibly separated from both her husband and her three-year-old daughter, and sent to a nameless prison called "the Tower," for purity training. Now a "Tower Woman," she finds herself at the bottom of a new social and political hierarchy, run by a faceless "Council" and characterised by the walled "sectors" of the city, connected by "skyroads" and an elaborate permit system for outsiders. Consigned by the new rules to a life of servitude for her past sinful living, she embarks upon a long struggle to pierce the barriers thrown up by the city, and find her daughter again.

In its vision of a nameless Indian city, segregated into suffocating, walled ghettoes (and gardens) along the faultlines of caste and religion, presided over by a ruling Council obsessed with ideas of purity and order, and in which economic insecurities propel a rapid descent into sectarian authoritarianism, Leila shares with the novels described above a perception that India’s fragile social consensus is unsustainable, pincered between the contradictory forces of uneven technological advancement and widening inequality. But Leila is also more than that. I have suggested elsewhere that the very complexity that attracts SF writers to India also undermines their work. A surface acknowledgment of this complexity becomes a justification for not engaging with it, instead liberating the writer from the constraints of coherence and plausibility. Instead of the painstaking world-building that is required of a novel set in the near-future, India becomes merely a site upon which the writer has a free rein to develop their own particular vision of dystopia. What follows is often excellent SF, but also an India that is barely plausible to anyone familiar with the country.

This is not a trap that Akbar—whose non-fiction has explored contemporary Indian issues with sensitivity and nuance for many years—falls into. The novel’s foundational premise—a city physically segregated on the basis of caste and religion—speaks directly to the housing segregation that is widespread in Indian cities, a fact that urban Indians are keenly aware of (either through experience or anecdotally), and which is reported occasionally but is not yet a civil rights or an electoral issue. His use of a water crisis as a trigger for organized political and social violence, meanwhile, will not seem an unlikely choice to anyone who has contended with disruptions to the water supply in Indian cities (although Ian McDonald did get there first, with River of Gods). Likewise, the evolution of the city into a simmering confrontation between the palace and the shanty (as Jean Genet would put it), the borderlines of which are relentlessly patrolled by private militia, will be instantly recognizable to anyone familiar with New Delhi, or Mumbai, or Kolkata. Even Akbar's techno-utopian device of choice, an air-conditioned dome that privatizes air (which plays a marginal—though important—role in the novel), feels especially prescient in a week where the government of New Delhi ordered all school classrooms to be fitted with air purifiers to combat the intractable problem of urban pollution. If the task of near-future dystopic SF is to present us with a world that is recognizable, and that is terrifying precisely because we see, in it, the contradictions of our own world taken to their remorseless extreme, then Leila succeeds as a dystopia of a near-future India.

Well, perhaps not entirely. A blurb review of the novel draws a comparison with Margaret Atwood, and indeed there are strong echoes of The Handmaid’s Tale (1985) in Leila. This is not limited to painting a grim world of near-total political and sexual repression; like Atwood, Akbar also recognises that, when faced with power, the human instinct is not to rebel, but to negotiate. Shalini is closer to Offred than she is to Winston Smith, her struggle limited to working around the system to get what she wants, and she's a far cry from even contemplating its overthrow.  But if, like The Handmaid’s Tale, Leila paints a convincing picture of the relationship between concentrated power and the individual, unlike The Handmaid’s Tale it doesn’t quite tell us how a semi-functional democracy careens into totalitarianism with such astounding rapidity. To establish its autocratic regime, Akbar’s ruling "Council" would first have to destroy or entirely co-opt every functioning institution that structures Indian public life today. This is not an easy task; but apart from brief, throwaway hints involving conflict over water shortages, and an extreme social backlash to the increasingly disordered and atomised life that characterizes urban India, Akbar doesn’t tell us much. Nor does he tell us about the city’s relationship with the rest of India. Has the entire nation transformed itself into segregated ghettoes and gardens? And if not, how exactly does the city—which seems to be an entirely self-contained entity—deal with the country that it is a part of? Perhaps that is a deliberate authorial choice, and Akbar intends for our imagination to fill in the gap. It does, however, seem a gap too large for merely the reader's imagination to fill.

But there is one way that Leila goes beyond even The Handmaid’s Tale: it addresses individual complicity in the creation and maintenance of an unsustainable equilibrium which, when it breaks down, can only give way to totalitarianism. Akbar accomplishes this by writing Leila—to borrow a term used by Adam Parry to describe The Aeneid—in two registers. The dominant register is Shalini’s struggle against the totalitarian structures and the hierarchies of purity and order established by the Council. But scattered throughout the book, with knife-like precision, are instances of Shalini’s own conduct which, when examined forensically, differ from the Council’s only in degree. Just like the Council chooses to air-condition an entire sector, and generate an exhaust that sets fire to an adjoining slum, Shalini chooses to celebrate Leila’s third birthday around an artificial swimming pool while the city is in the grip of a water crisis. The difference is one of scale, not of nature.

W. H. Auden once refused to ask "what doubtful act allows / our freedom in this English house / Our picnics in the sun." Akbar tells us that the longer we refuse to ask that question about the doubtful act—the covert, faraway, impersonal, and distant violence that allows us our picnics in the sun—the closer that violence will come to becoming overt, and ripping apart our lives. Leila is about what happens when the question can no longer be put off. In that sense, it is that rare SF novel that deals squarely with questions of class. While that in itself is not new (Ursula Le Guin’s half-century-old The Dispossessed <[1974] springs immediately to mind), Leila is unique in how Akbar refuses to spare his protagonist—his victim of the totalitarian regime—from the responsibility of perpetrators. "Victims do not ask their executioner," Mahmoud Darwish wrote, "Am I you? Had my sword been / bigger than my rose, would you / have asked / if I would have acted like you?" Leila is about the necessity of asking that question anyway.

Like Loading...
© Copyright 2017 By: Gautam Bhatia
About Gautam Bhatia
Gautam Bhatia is based in New Delhi, India. When not at his day job as a lawyer and legal academic, he tries to lay hands on the latest works of historical and speculative fiction—with a particular taste for high fantasy and Orwellian dystopias—and read them from cover to cover. He has reviewed before for the Jadaliyya Magazine, and blogs about books at anenduringromantic.
One comment on “Leila by Prayaag Akbar”
Strange Horizons - 2017 in Review Part Three By Our Reviewers

[…] Singh: Prayaag Akbar’s debut novel Leila was the high point of the year for me. A dystopian novel that is both a tale of personal loss and a […]