Reviews
Size / / /
Half of What I Say by Anil Menon
By: Gautam Bhatia 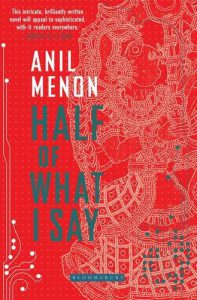 In 2011, a wave of anti-government protests rocked India’s capital, fueled by popular demand for a strong anti-corruption law and an independent enforcement body. In 2016, police entered New Delhi’s Jawaharlal Nehru University to arrest students for the crime of “sedition.” A few months later, the film director Karan Johar’s latest venture ran into serious trouble for having cast a Pakistani actor, with threats of organized violence forcing him into a “settlement” that was overseen by his state’s Chief Minister.

Anil Menon’s Half of What I Say, published in 2015, brings these three disparate events together, building upon the first and (eerily) predicting the rest. The anti-corruption movement eventually split in 2012, with some of its protagonists going on to constitute their own political party, and the others left divided and ultimately defeated. Menon imagines an alternative future in which (presumably, because we’re never given the full backstory) the movement succeeded in its demands, and birthed the “Lokshakti” (transl.: “people power”), a governmental—yet shadowy—organization that has accumulated immense power under the guise of fighting corruption, with its own soldiers, prisons, venture capitalist funds, and even a “Cultural Department.”

The novel begins with the suspicious death of Durga Dhasal, a polyglot leftist politician who has long been a thorn in the side of the Lokshakti. Dhasal has been involved in a running legal battle with the Lokshakti’s Cultural Department, which is headed by Vyas (one of the book’s many protagonists, but perhaps the most important one). In the course of their legal correspondence, Vyas accidentally sends a love letter intended for his wife to Dhasal instead. Dhasal dies before Vyas can retrieve it. As he searches for the letter, Vyas finds that many years earlier, Dhasal was involved in the making of a never-released film called Ajaya, a subversive take on the ancient Indian epic of love and separation, The Ramayana. As the parallels between his love letter and the suppressed film begin to grow clearer, Vyas’s quest expands and leads him to encounter a bewildering and cacophonous ensemble of characters, including the authoritarian head of the Lokshakti, a nationalistic venture capitalist, a tech-utopian intent on bringing “super-speed” Internet to the rural masses, a brilliant scientist, her seemingly radical student-organising partner, a rags-to-riches actress who had once played a role in Ajaya, an Urdu poet and scriptwriter, and Durga Dhasal’s former, disgruntled employee with a taste for revenge (among others). Family connections, old school networks, and fortuitous encounters weave this bizarre cast of characters into a web of relationships that is constantly fraying around the edges, bound together by the sinister force of the Lokshakti on the one hand, and the haunting story of The Ramayana on the other.

This probably sounds a lot to take in. It is. Ursula K. Le Guin’s testimonial on the front cover of the book calls it an “intricate novel,” while the blurb calls it “polyphonous.” These are understatements. The story is told from the points of view of at least eight characters, who chase each other on and off a crowded stage at an almost bewildering speed, alternating between first person and third person narration with uneven regularity. Ideas—such as, for instance, “Super Wi-Fi,” or student hackathons called “fab-jabs”—jostle each other for space in an equally crowded intellectual landscape, without even a hint of resolution.

At times, these unspooled threads can be frustrating. But perhaps that is the point. Half of What I Say advertises itself as “genre-crossing,” and while it might be difficult to pinpoint the genres that are implicated in its narrative, there is little doubt that primarily, it is a novel about contemporary India, where the postcolonial social and economic consensus has long been shattered, an India that is splintered along every line imaginable, beset with conflicts, and pulled between warring national narratives that leave little space for coherence or conciliation. The sense of incompleteness that lingers throughout the book perhaps reflects the incompleteness of living in a society where the relatively stable social and cultural “contexts of choice” have broken down. This is not, of course, a new argument. In his Introduction to Elias Khoury’s Little Mountain, a surrealistic story set in the midst of the Lebanese Civil War, Edward Said observes, in words that are strikingly applicable to Half of What I Say:

… form is an adventure, narrative both uncertain and meandering, character less a stable collection of traits than a linguistic device, as self-conscious as it is provisional and ironic. (p. xv)

India, of course, is far from civil war Lebanon, and Half of What I Say has a lot more narrative solidity than Little Mountain. Many of the incidents it recounts—including its accurate predictions about student arrests and film censorship—have an air of concrete plausibility. The techno-evangelists’ attempt to bring “connectivity” to the country mirrors the rhetoric of their real-life Silicon Valley counterparts; the tense relationship between state power and the film industry has long been a staple feature of political and cultural life; and the economic contradictions that explode into personal violence are grimly predictable. There is something more, however, and this is perhaps the point at which the “genre-crossing” of Half of What I Say brings it into the ken of what we unreflexively understand as “speculative fiction.” Although the novel is set in a very recognizable India, this recognition is tinged with that slight hint of unreality that lends the whole work an uncanny feel. The Lokshakti is a believable organization, but the breadth and scope of its power with its own prison cells, private armies, and powers of extrajudicial execution reveals itself in unexpected and unsettling ways; the story of the superstar actress Saya is believable, but her fortuitous reunion with her childhood playmate and now personal bodyguard, Bilkis, and her continuing insistence that she is a resurrected princess, bears just that light touch of a myth or a fable. “Super Wi-Fi” could easily be a Facebook venture, but the project’s alliance with the Lokshakti’s Cultural Department in a seamless merging of the objectives of state and corporate control has the feel of a near-futuristic dystopia.

There is one moment in the book that seems to bring all of this together. Thinking aloud with the book’s audience about the possibilities of Super Wi-Fi in India’s villages, Vyas’s wife, Tanaz, casually observes: “I'm coming to take away all their stories” (p. 175). There is a particular poignancy to this, because during the days of colonialism, the proselytizing Salvation Army would specifically separate the children of indigenous (or, as they are more frequently known, “tribal”) families, and “re-educate” them with different stories and narratives about their origins (see, e.g., Meena Radhakrishna, Dishonoured by History [2001]). The colonizers have long gone, but little has changed in the state’s treatment of its indigenous people. “I’m coming to take away all their stories,” in the context of the yet-to-be-invented “Super Wi-Fi,” combines fierce social critique with a disquieting imagination of the near future.

Although one should be careful not to push the analogy too far, in its disquieting blurring of the plausible and the barely imagined, there are some resonances with some of the early works of Latin American magic realism, such as Juan Rulfo’s Pedro Paramo and Adolfo Bioy Casares’s The Invention of Morel. And closer home, Half of What I Say also bears some intriguing parallels with Aditya Sudarshan’s The Persecution of Madhav Tripathi, which was published a few months before, in early 2015. Sudarshan’s novel, like Menon’s, attempts to address the political, economic, and cultural violence that has come to be woven into everyday Indian life, and does so by introducing deft brushstrokes of unreality upon a grimly realist canvas. Two novels do not a tradition make; but as the contradictions in the Indian society and polity continue to deepen, it will be interesting to see whether more books will be written that straddle this uncertain—and sometimes, uneasy—twilight zone between the speculative and the firmly realistic.

Like Loading...
© Copyright 2016 By: Gautam Bhatia
About Gautam Bhatia
Gautam Bhatia is based in New Delhi, India. When not at his day job as a lawyer and legal academic, he tries to lay hands on the latest works of historical and speculative fiction—with a particular taste for high fantasy and Orwellian dystopias—and read them from cover to cover. He has reviewed before for the Jadaliyya Magazine, and blogs about books at anenduringromantic.
No comments yet. Be the first!