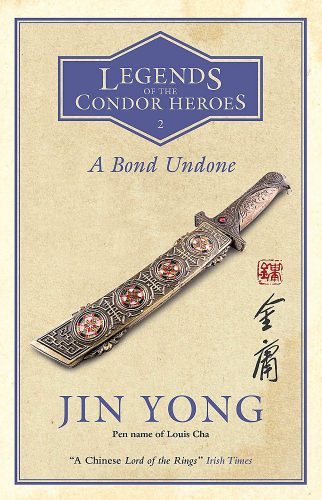 At just under five hundred pages, this second book in Jin Yong’s martial arts fantasy (wuxia) series Legends of the Condor Heroes is a fierce, exciting story about true love, superhuman athleticism, political intrigue, and the eternal conflict between good and evil. It’s no wonder, then, that Jin Yong’s books have been and continue to be wildly popular across the Chinese-speaking world, and thanks to MacLehose and translators like Anna Holmwood and Gigi Chang, us Anglophone readers now have a chance to fall in love with them, too.

Picking up where the first book, A Hero Born, left off, A Bond Undone starts in the middle of the action, with Lotus Huang trying to escape from the palace of the Sixth Prince of the Jin Empire (where she’d been acting as a spy), while her friend/boyfriend Guo Jing is simultaneously running away from a man skilled in medicinal remedies—and from whom he’s stolen some herbs to help cure his friend Elder Wang. This kind of momentum at the beginning of the novel propels the plot and characters through to the very end.

In escaping from his pursuer, Guo Jing inadvertently stumbles upon Cyclone Mei, who had once roamed the countryside with her husband Hurricane Chen, spreading chaos with the kung fu they learned from stealing one volume of the invaluable Nine Yin Manual. This manual becomes the point on which the rest of the story turns, since the book contains what one character calls “the most wondrous, mystical kung fu. Just one glimpse can ensnare a martial man for life” (p. 352). Thus this book about martial arts fantasy is about characters trying to get their hands on a book about martial arts.

Such a nested, even playful, kind of structure is in perfect keeping with the rest of the novel’s balance between serious, deadly conflict and humorous dialogue. Lotus Huang, in particular, is irreverent in the extreme: defending Guo Jing against those who call him dumb, standing up to her imperious and demanding father, and smacking down any would-be suitors who try to gain her hand in marriage through kung fu. Trained in part by her father, who just so happens to be one of the greatest martial masters in the world, Lotus uses skill, cunning, and humor to escape from one trap after another. Her steadfast loyalty to Guo Jing, a humble and simple soul from Mongolia who nonetheless becomes a fierce kung fu warrior, gives this story a firm foundation, where the reader knows that true love and integrity will always prevail.

Whether Lotus and Guo are fighting with or against Cyclone Mei, or trying to get to one another via the maze that is Peach Blossom Island (where Lotus’s father holds sway), they always remain loyal to one another, and celibate as well (since we’re told that Lotus knows next to nothing about the birds and the bees … and no one bothers to teach her). The duo goes charging across the landscape fighting enemies and falling in with kung fu masters who give them invaluable training, an equal partnership somewhat like that of Farscape’s John Crichton and Aeryn Sun.

Some of the most interesting parts of the book deal with the complicated and deadly kung fu maneuvers themselves, which the characters learn and often deploy; moves like the “Dragon-Subduing Palm” and “Wayfaring Fist.” Such maneuvers teach the characters how to channel their inner strength to repel an attack, strike an opponent in order to subdue but not kill them, initiate the process of self-healing, and more. The Nine Yin Manual is so important because it shows how words on a page can translate into actions such as these, transforming the intangible into the physical and material. This is partly why Guo Jing develops so quickly into a skilled kung fu warrior: he's forced to memorize the words behind each maneuver (because he can’t comprehend them well). These words become ingrained in his mind, and, through exhausting practice sessions, translate into muscle memory—such that Guo can fight an opponent with maneuvers that even he didn’t know he had mastered.

With multiple plotlines unfolding themselves simultaneously—Lotus’s father looking to control the only copy of the Manual, Lotus and Guo gathering intelligence about the Jin Empire, the four living martial masters making their way to Mount Hua for a contest to decide who will ultimately hold the Manual—the characters and motives can get a bit confusing. Thankfully, the first few pages of the book include an annotated list of characters. Notes in the back about key historical figures, literature, and objects from Chinese history enable the reader who is unfamiliar with them nonetheless to understand character motivations and the rich history of ancient China. Gigi Chang’s clear, perfectly pitched translation makes the nearly five hundred pages fly by.

I’m looking forward to the next books in this series as they are translated into English over the next few years. Indeed, a large quantity of wuxia in English translation already exists on the internet, and hopefully that valuable resource, and wuxia published like this in print, will attract even more Anglophone readers to the novels of the talented, versatile Jin Yong.