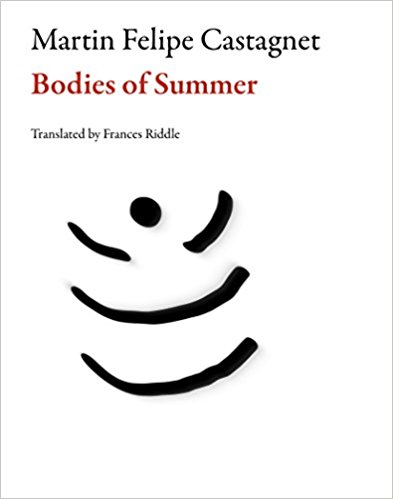 This slim little volume (just one hundred pages) packs a powerful punch. Castagnet has created a world in which heaven (or maybe purgatory?) is the internet and reincarnation is the process of "burning" people's consciousnesses back into unoccupied bodies. Ethical, technological, philosophical, legal, and religious questions abound in this debut by a talented Argentine author, urging us to think more deeply about the many implications of near-immortality.

In a way, Bodies of Summer is like a reworking of Tennyson's poem "Tithonus" (1859), in which immortality without eternal youth is portrayed as an agonizing burden, rather than a gift. An ending (death) gives life purpose and meaning, whereas the lack of a clear endpoint offers simply a yawning void. As the narrator of Castagnet's novel remarks near the beginning of the story:

"Death still exists; what has disappeared is the certainty that everything will eventually end sooner or later. There's time to shave your head, time to let the gray hairs grow, to get pregnant, to torture, to be the world champion, and to rewrite the encyclopedia. With patience, a single person could build the pyramids; with perseverance, another single person could knock them down. I guess destruction is another form of love." (p. 28)

Eventually, even this continuous body-exchanging must come to an end, since consciousness itself must inevitably deteriorate, whether on the internet or housed in a new brain. But does it ever really end?

And while the potential portability of human consciousness is nothing new to the world of speculative fiction, Castagnet's approach is relatively unusual in that non-organic bodies are nowhere to be found in Bodies of Summer. Human minds are placed in human bodies, and the only technology involved is the amorphous internet. How consciousness is uploaded is never explained, nor is the process by which it is stored. We're simply told by the narrator (who has himself just woken up in a new body) that "the state of flotation," or the uploading process, "is the maintenance of brain activity inside an information system. It's the first step necessary to save an individual consciousness" (p. 11). Some people can opt to remain on the internet indefinitely, though most choose to return to tangible reality in a "new" body. A few people choose to return to their original bodies, but since those bodies were likely damaged in some way (the reason for death in the first place), these people are considered crazy and are often shunned. And then there are the rare eccentrics who choose to die, period.

Throughout the book, Castagnet toggles between, on the one hand, showing us what life is like for a person who has been "burned" into a new body and, on the other, telling us about the social, political, religious, and legal implications that have sprung from this brave new world. Ideally, Castagnet would have incorporated these fascinating questions and explorations into the fictional world that he created, but then we'd have had a thousand-page-long book. And while such hefty tomes have their place, that doesn't seem to be what the author is trying to accomplish here. Bodies of Summer is ultimately not about the details of the intersection of humanity and advanced technology, but rather how humanity might potentially tackle the problem of elongating life spans and preserving consciousness prior to or after death.

Specifically, Castagnet shows us how Ramiro (Rama) Olivaires, an otherwise unremarkable family man, is "reborn" into the body of a large, middle-aged woman (what his family can afford) and what that means for his relationships to his living family members and his own sense of self. His elderly and dying son Teo (who refuses to be uploaded to the internet, despite his family's protestations) doesn't know what to make of his father in his new form, while the rest of Rama's extended family awkwardly tiptoes around him, unsure of how to incorporate him (back) into their lives. Rama himself struggles to align his psychological and emotional identity as a man with the sensations and cellular memory of this new body. Awkward moments of sexual tension and issues of stamina and strength force Rama to think carefully about how he can use his new body to further his two objectives: find his wife's second family (since she remarried after his death), and find his former best friend (for the purposes of revenge).

It doesn't take long before Rama realizes that his presence in his family's house is putting a strain on everyone, since it's unclear what he should do with himself. Deciding to seek employment, Rama applies at the architecture studio that he himself founded a century before, but the current executives could care less who he is. Other attempts at finding a job end in failure, so Rama eventually goes to an agency that helps newly burned people adjust back into society. It is there that he is approached by a "cybernetic archaeologist" who wishes to employ him as a kind of historical interpreter: "I'll be able to ask you questions using what, for most people, is specialized jargon. Can you tell me the difference between a Betamax and a VHS? What sound did the first modems make? Can you explain what exactly a .gif was?" (p. 60). But it is precisely this kind of information and historical memory (remember that Rama's consciousness is now a century old) that keeps him from fully incorporating himself into the current world. He's like a dinosaur striding among skyscrapers, catching brief glimpses of the world he once knew, but unable to accept completely its extreme transformation.

Indeed, we're never sure what Rama really thinks about the whole "flotation" and "burning" process: his tone is one of weariness and disillusionment, and it's as if he's only truly returned to a human body to complete the two objectives noted above. In this way, the transfer of one person's consciousness into another's body is not a transformative, spiritual experience. Old hatreds and loves, grudges and fears—they haven't changed; now people just have more opportunities to chase happiness or court disaster. As the narrator notes early on, human nature is static: discrimination, intolerance, snobbery, greed have all just altered their shape without changing their substance. Perhaps it is fitting, then, that Rama eventually is reborn into a nonhuman body (I won't spoil the book by being more specific!).

Ultimately, Bodies of Summer asks the age-old question "what price immortality?" and offers us some possible answers, none of them very appealing. The duality of a decaying body and a near-eternal consciousness raises the issue of the mind-body connection and to what extent it is permanent (i.e., can a consciousness ever really be transferred into a different body? How would that work vis-à-vis the brain? etc.). Castagnet, though, has offered us a glimpse of this world, and the ways in which one might move through it after death and rebirth. Like Francesco Verso in Nexhuman (Italy), Juanfran Jiménez in “Bodies” (Spain), Agustin de Rojas in The Year 200 (Cuba), Fujita Masaya in “Angel French” (Japan), Jacek Dukaj in The Old Axolotl (Poland), and others, Castagnet invites us to peer into one of humanity's possible futures, and prepare for it accordingly.

Like Loading...
© Copyright 2017 By: Rachel Cordasco
About Rachel Cordasco
Rachel Cordasco has a PhD in literary studies and currently works as a developmental editor. When she's not at her day job or chasing three kids, she's writing reviews and translating Italian speculative fiction. She runs the website sfintranslation.com, and can be found on Facebook and Twitter.
No comments yet. Be the first!