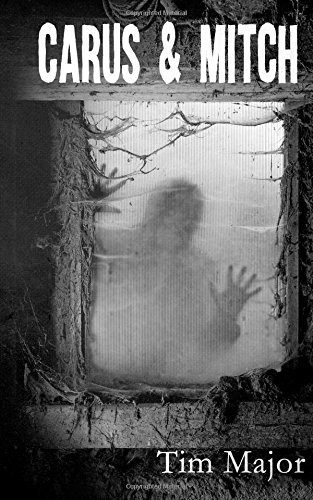 The slow dread of Carus & Mitch builds into a terrible crescendo reminiscent of Shirley Jackson at her best. At the center of this post-apocalyptic horror novella are two siblings: fifteen year old Carus and seven year old Mitch. They, along with their mother, fled Oxford in the wake of some unnamed disaster. As Mitch describes it, in Oxford, “There were cracks in the pavements, and they were going to get bigger, so big that people coming around corners might just drop into the cracks and never bump into each other at all” (p. 17). The horrifying thing is that you have no idea what she’s talking about: she’s telling a story of a story, the story her sister has told her, the story her mother told her sister explaining why they’d fled in a car to their uncle’s house. Cracks in the pavement? Scratches at the window? Barricades preventing light and sound leaking out of the front windows of this old manor house? All that’s certain is that something happened, something bad, and the only things keeping these two children alive are the chickens they raise in the living room and the daily deliveries of tinned food from the mysterious, fickle, and unseen Jom.

Major’s gift in Carus & Mitch is that he acknowledges the tropes associated with post-apocalyptic girlhood (as explored in works like Z for Zachariah and How I Live Now) with grace and finesse. Carus is utterly a teenager—unsure of herself, arbitrarily bossy, and reliant on her own precarious sense of control to feel safe. On the morning of her fifteenth birthday, Carus notices the “Sunbeams dipping into water like loose coils of rope” (p. 5). She simmers with fear, resentment, and sisterly love. Surely anything would be better than staying inside that house. Then again, there’s the obvious risks of leaving the safety of their barricaded hidey-hole. “Other than Jom,” Carus thinks, “there are only the people who scratch and scrape at our windows from time to time. If you can even call them people. Mitch has never even heard them, thanks to all my hard work and tricks to distract her. Well done me” (p. 13). At least inside the house, Carus and Mitch can be assured of each other’s basic humanity. Inside the house, they have their routine, the daily and weekly rituals that assure their safety and survival, their chickens, and each other.

Major departs from the trappings of post-apocalyptic girlhood in two significant ways. Firstly, Carus does not have agency in the ways we recognize as foundational to speculative fiction and this genre. She’s not an explorer. Instead, she’s willfully uncurious about why they and their mother fled the city, who Jom is, what growls beyond their walls, how the water still works, and when they can leave. She’s not even entirely sure where they are. The refusal to think about these questions at first seems part of being a traumatized adolescence. Their answers involve pieced together memories tied up with her family’s nighttime flight from the city, or require a larger context than a self-taught isolated teen might have. Then, there are the headaches. Thinking too hard hurts Carus; she loses time, panics, gets mad. Her anger is ugly, and can only be directed towards little, annoying, irresponsible Mitch. And who hasn’t been annoyed by a little sister and her questions? It’s tempting to trust Carus—after all, this is horror. Maybe she’s overly cautious, but maybe she’s just a teenager doing the best she can in a world filled with dangerous unknowns.

It is in the character of Mitch that Major further explores agency and girlhood in post-apocalyptic fiction. It is Mitch who questions Jom’s benevolence, who chafes at the boundaries of their world. It is Mitch whose clever fingers explore the girls’ barricades, even as she demands an explanation for their role in the house. After all, their whole world has been reduced to the kitchen, a makeshift library under the stairs, the chicken room, and the bedroom they share. Why can’t they go into the front of the house? Why can’t they go into their mother’s old room? What’s in the garage? What’s outside the yard? Why do they even need barricades inside? Where are we on this map? Carus tries to appease Mitch, then bully her, into submission. At this point, the reader is torn. Mitch might be the younger sister, but her questions are legitimate. As the novella progresses, they become urgent. The house is haunted by the ghosts of Carus’ fears: her guilt over not being a better sister, her anxiety over leaving the safety of their home’s sturdy walls, and her amorphous grief over the loss of their mother. Nothing is safe; all Carus’ thoughts are defined by a sense of foreboding unease. However, Mitch’s questions reveal the gaps in Carus’ knowledge: the house might be haunted, but we don’t actually know if they’re being hunted. How much of the sense of impending dread is coming from Carus herself, a girl who defines the safety of her world through ritual, restriction, and rules? It is only Mitch who questions whether survival is enough.

This is a tiny novella, but then Mitch is a tiny girl, under-nourished and confined to three rooms. Metatextually, Major carries out an interesting shift here: he centers Carus’ perspective as narrator and big sister, but in the tiny space of the novella he positions the reader as Mitch, speeding through a story she’s come in on halfway, trying to understand the rules governing their strangely confined world. Carus is inexorable, moving forward, and Major lets her do so, so that our questions, like Mitch’s, go unanswered. As the novella reaches its dreadful, grim climax, we, alongside Mitch, discover that there are many ways a world can end, and many angry monsters waiting for you to open the gate in the garden. Some of them take the form of one’s own sister, a sister willing to murder to protect the sanctity and safety of her three rooms, a sister unwilling or unable to create a space for another little girl to grow up. The horror here is that zombies would be a relief.

Like Loading...
© Copyright 2017 By: Maria Velazquez
About Maria Velazquez
Maria Velazquez’ recent publications include “The Occasional Ethnicities of Lavender Brown: Race as a Boundary Object in Harry Potter” in Critical Insights: Contemporary Speculative Fiction and “’Come Fly With Us!’: Playing with Girlhood in the World of Pixie Hollow” in Cases on Digital Game-Based Learning. When not thinking big thoughts on politics and technology, she is an avid reader, writer, and fangirl for all things sci-fi and fantasy.
No comments yet. Be the first!