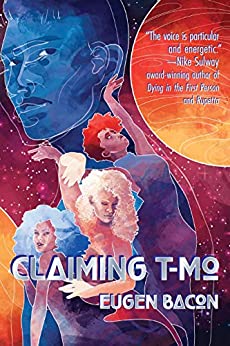 It starts with a vision. Salem Drew, a preacher's daughter, is in the bus depot when she sees a vision of a “puzzle-piece woman with fifty-cent eyes” (p. 5). The woman is a puzzle because Salem’s vision is both abstract yet very much grounded in detail. The injured eye, the rugged, disfigured face, the maroon hair—all are “put together,” but lack cohesion. The image is enough to startle and confuse Salem, but it is a foretelling of her future. The next week, Salem meets T-Mo, the son of Silhouette, the woman whom Salem envisioned at the bus depot. Their fated meeting will change her life and the lives of their daughter, Myra, and granddaughters, Tempest and Amber. But it all begins with Silhouette, whose struggle to gain self-actualization forms the beating heart of the novel. Claiming T-Mo, written by Australian author Eugen Bacon, is the story of the family which begins at this moment—and its struggle to break free from patriarchy.

Claiming T-Mo is not an easily categorizable novel. It is part-magical realism and part-science fiction, but it is also quite literary, as in love with the joy of language as it is with worldbuilding. Silhouette, an inhabitant of the planet Grovea, is in love with words, particularly the sounds they make and the effect they have on her when spoken. A child-bride sent off to live with her husband Novic, an immortal Sayneth priest in their matriarchal society, Silhouette soon learns that the romanticism of being the first wife of an important figure has its costs in violence and rape. Her only joy is giving birth to her son, whom she names T-Mo for the delight its sound makes on her lips. “T, I liked the sound it made, quiet-like, no pull on the voice. I wanted to put my hand on the throat and say T, T, T, but instead reached and took him from Blanket, who was so stunned at my naming of the child, she nearly dropped him” (p. 38). In this society, women name children, but Novic flouts the rules and names his son Odysseus, thus creating a schism that upends Silhouette's happiness.

Thanks to this schism, T-Mo experiences a personality split that is reminiscent of Dr. Jekyll and Mr. Hyde. When he is T-Mo, he is a bright, smiling, happy child, the light of his mother's eye. But when he is Odysseus, he is violent, angry, and vicious. Silhouette witnesses the strange transformations he undergoes. Whereas T-Mo “closed his baby eyes as he fed, closed them like there was heavenly flavor in my milk, angels pissing nectar on his tongue” (p. 40), Odysseus “hated touch, shrugged to get loose from my clutch way before he could crawl.” At the age of four, he attacks another man who has slighted him with a strength that requires more than one man to overcome. Silhouette loves T-Mo, but fears Odysseus. When Odysseus takes a tumble down the stairs and injures himself with a blade, Silhouette goes to comfort him. But his rejection of her leaves her cold: “Without a word he peeled my fingers from his body and rose, crystal eyes avoiding mine. Like my own ice, his touch was frosty on my skin” (p. 68).

Having lost her son for good, Silhouette leaves her family and Grovea forever. Capable of interplanetary travel through flight, Silhouette has adventures of her own on other planets, where she meets and makes friends with the inhabitants of each. But it is her passage to Earth and her brief interaction with Salem that begins the novel. Salem, like Silhouette, grew up in a patriarchal household, so her relationship with T-Mo, who leaves Grovea to settle on Earth, is an escape. But after they have a daughter, Salem soon realizes that the man of her dreams is a nightmare as well. He beats her, then abandons her soon after Myra is born.

The bulk of this short novel is divided in sections devoted to each of its main characters, and recounts the lives of Myra, her husband Vida, their parents, of course, and in turn their two daughters, Tempest and Amber. Myra is a hybrid of a Grovean and human, and therefore—like her grandmother—has unique powers. She is also capable of interplanetary flight, a skill that allows her to become a mediator for alien refugees after their spaceship crash-lands on Earth. Their daughter, Tempest, also a hybrid, is capable of stepping into people's minds and seeing their thoughts, both past and present. After the ship crashes into Middle Creek, the town of the novel's setting, its survivors are placed into Camp Zero, a refugee encampment run by the Shiva, an alien race. One of the refugees, Balmoral, goes insane after his wife and daughter are raped and slaughtered by guards. Tempest steps into Balmoral's mind and discovers his younger daughter hiding in terror in one of the encampments. Tempest brings Amber home and the two quickly become sisters, communicating through a language only the two understand and getting into the sort of fights only sisters recognize.

Amber is the catalyst by which Odysseus returns to Myra's life. He draws Tempest and Amber into his world, charms them with his music, and eventually has them under his spell. Both girls develop crushes on him, but it is Amber for whom Odysseus has come. He appears like a dark cloud and begins wreaking terror in Middle Creek, much of which is briefly implied. His arrival threatens the peace each of the women has forged in his absence, setting the stage for Myra, Salem, and Silhouette to battle over T-Mo/Odysseus's soul.

There is a lot to like about Claiming T-Mo. It's set in an inventive world, as heavily reliant on magical realism as it is on science fiction. There are parts that feel real and familiar, but this is also a world whose inhabitants recognize alien lifeforms living amongst them, know that magic exists and that potted plants can sing, that interplanetary travel through flight is possible. Bacon's world feels lived-in as much as it feels mythical, as ancient as it is fresh. Yet it is her mastery of language that is the true magic of this book.

As I walked into dawn a cloud churned with malevolence above the plains. The land still fought, shifting its stomach to conflict my tread. So precise the malice of its reasoning, it knew exactly where to find my next step and a calculated hump would upset my foothold. I mislaid my heel and hit the ground. Glimmers on my head just then falling from the sky affirmed the ungodliness of this world. (p. 69)

This largely plotless novel sings with its language alone, and, for that reason, Claiming T-Mo could have been successful on those terms alone. In its brevity, too, it has more in common with literary novels, whose focus on language and character is their defining feature. But it is also a SF/fantasy novel, and it is steeped in familiar genre tropes—and I'm not entirely certain that Bacon was successful in this area. While the worldbuilding is fine and even imaginative, there are aspects of it that left me with more questions than answers. Grovea, for instance, is implied to be a matriarchal society, but, aside from its women having the power to name their own children, its supposedly ruling gender don’t seem to have much power at all. Bacon never explains, for example, why men serve as the immortal Sayneth priests and not women. The fact that girls are prepared to be the brides of such priests isn't particularly matriarchal either. I would have liked more worldbuilding in this regard, perhaps to explain why these contradictions—which any society will inevitably have, and which consequently this novel sometimes shares—were shaped in time.

I mentioned, too, that the novel is largely plotless—and it is. Much of it focuses on Myra and Vida, their meeting as children in the local school, their—on Vida’s part awkward—courtship, marriage, and the birth of their daughter. In between all this, there are Vida's parents, who go through their own courtship and marital struggles; the crash of the alien spaceship, Myra's advocacy for the refugees, and her raising of Tempest and Amber. There is also a brief foray into a story about a serial killer preying on the citizens of Middle Creek. This subplot is never fully explored and has only an implied connection to the main plot of the novel. It is to Bacon's credit that these tangential threads do not feel overcrowded or overworked. However, there were points when I wondered where the novel was leading.

Throughout, the novel promises an inevitable showdown between T-Mo/Odysseus and the women, but, when the moment arrives, it feels more anticlimactic than epic. In fact, it feels more like an afterthought. For that reason, the character of T-Mo/Odysseus suffers the most. He is absent throughout much of the plot and, since we do not experience T-Mo/Odysseus's story from his perspective, his struggle to contain the evil side of his nature is only hinted at. His motivations seem reduced to playing the role of the bad guy, even as Bacon insists he is more complex and conflicted than that.

Why does T-Mo/Odysseus develop a near-incestuous obsession with Amber? What connections did he have to the serial killings? How does he really feel about his broken life? Bacon does not explore these questions and the novel's conclusion feels rushed for that reason. T-Mo is the eponymous center of the story around which the women in his life revolve, but the novel is nonetheless about the women themselves and their struggle to find self-love and acceptance. T-Mo/Odysseus is an important piece of this struggle, his redemption a necessary corollary to returning balance into their worlds; and for that reason I do wish he could have been more finely drawn as a character rather than depicted simply as an avatar for toxic masculinity.

Underneath it all, Claiming T-Mo is about the tropes of masculinity and femininity, what happens when the two are split apart, and the damage that is left in their wake. It is about broken people searching for love, forgiveness, wholeness. It is about family and redemption. But regardless of its plots and themes, the real pleasure in reading Claiming T-Mo can, despite its weaknesses, be found in the sheer strength and beauty of its language alone.

Like Loading...
© Copyright 2020 By: Cynthia C. Scott
About Cynthia C. Scott
Cynthia C. Scott is a writer from the San Francisco Bay Area whose work has appeared in Glint Literary Journal, Copperfield Review, Flyleaf Journal, Graze Magazine, and Strange Horizons. She also writes reviews for Bookbrowse.com. She's currently working on a series of SF novels called The Book of Dreams.
No comments yet. Be the first!