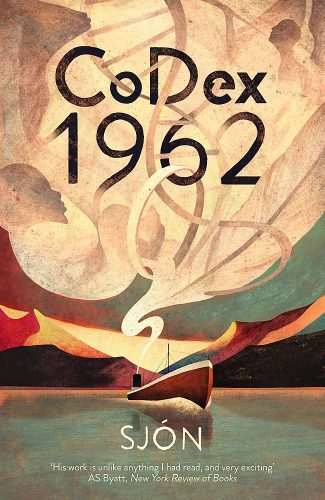 A trilogy written over the course of thirty years, CoDex 1962 evades any efforts to wrestle its plot down into a coherent, logical narrative. And that, actually, is half the point. One gets the sense that Sjón had an obscene amount of fun writing it: jumping from one kind of narrative style to the next; interweaving them with one another; drawing upon Biblical stories, folk tales, science fiction, lists, and more; all to give us a glimpse into the rich and complicated history of a country (Iceland) that wants to be only itself but is nonetheless bound up in world history. This playfulness and experimentation is what makes Sjón, Sjón—an award-winning author who has worked with words, art, and music, and collaborated with Icelandic singer-songwriter Björk.

With CoDex 1962, Sjón offers us a book whose very title calls our attention to its construction. After all, the early twenty-first century is the perfect time to think about what it means to take in a narrative constituted of pages that are bound together. In the narrative of reading technologies, the codex lies temporally between the scroll and the e-reader. It continues to hold a special place in our hearts, with scrolls being mostly relegated to religious observances and e-readers never quite taking over the world and bringing an end to tangible books, as some apocalyptically predicted. The “1962,” meanwhile, grounds us in a particular point in time: a single year (in which the author himself was born) that spawns a tale stretching across the European continent and multiple decades.

The first section, “Thine Eyes Did See My Substance (A Love Story),” reads like a tale from the Brothers Grimm which happens to be set during World War II. The narrator stays in the head of a servant girl (Marie-Sophie) in a German inn who is tasked with secretly caring for an emaciated, abused stranger. The oblique references to genocide, concentration camps, and war are so few and far between so that they bolster, rather than distract from, the fairy-tale, out-of-focus character of the narrative. It is during his time of convalescence (after escaping from the camps) that Leo Loewe asks Marie-Sophie to help him make his child out of “dust from under the Altneu Synagogue in Prague, dew from the roses in bloom in the Castle gardens, rain from the cobbles in the ghetto ... [and] his bodily fluids” (p. 161), all of which he has kneaded into clay in anticipation of the time when he might sculpt out the body of a baby.

In a way, this act of creation and transformation bursts the bounds of the narrative. At one point, the story of this sculpting breaks off long enough for the narrator to channel the first sentence of Kafka's “Metamorphosis”—and when his unnamed interlocutor protests, he explains that this literary allusion “adds depth to the story of Marie-Sophie and my father, the invalid, making it resonate with world literature” (p. 165). This practice of making literary allusions within a work of literature, and later embedding the author in the book as a minor character, invites us to recognize CoDex 1962 for what it is: a book about stories and how/why/when they are made.

“Part II: Iceland's Thousand Years (A Crime Story)” reveals how Loewe made it to Iceland, did everything he could to become an Icelandic citizen, stole back gold taken from him by the Nazis, and turned it into a filling that he finds in the mouth of an unscrupulous stamp collector (and which Loewe needs back if he is to bring his child to life). Included in this section are stories about ancient Icelandic characters, ghosts that hang out in graveyards, and a man who literally turns into a werewolf. It is in the midst of this literary maelstrom that Loewe finally adds the spark of life to the clay baby, who survives for the first few months on goat's milk.

The third part, entitled "I'm a Sleeping Door (A Science-Fiction Story)," shows Sjón at his most inventive. Long lists of those who were born during 1962, and the dates of their deaths, are interspersed with a story recorded by Loewe's son, Jósef, for a geneticist employed by a company called "CoDex." Only the words “boy,” “girl,” “man,” and “woman” are used to identify each individual on the lists. Meanwhile, it is that particular year in the early ‘60s that saw the largest concentration of nuclear tests, including that of the bomb that caused the largest explosion in the entire history of planet Earth. This kind of radiation has led to genetic mutations—and we learn that Jósef, one such victim, has become one of CoDex's subjects, asked to record his life story, a story which ultimately reveals his “true” origins. For Jósef suffers from fibrodysplasia ossificans progressiva, better known as Stone Man Syndrome, in which connective tissue turns into bone. It's a kind of runaway bone growth, an unstoppable redesigning of a person's insides, just as Jósef's own story of his origins runs away with itself, turning some parts of his tale into fable, some into science fiction.

The novel itself seems to have gathered so much momentum by the end that it runs off a kind of narrative cliff, taking us far into the future, in which supercomputers have teamed up with animals to destroy the human race ... and yet, Jósef's story survives in the depths of the "super-software's consciousness" as a text file, even once the Earth returns to an Edenic state. In these last few pages, Sjón still inserts literary allusions, this time to science-fiction author Karel Čapek (who coined the term "robot")—only fitting for this "science fiction" section of the novel.

CoDex 1962 is a riot of colorful stories and styles, beautifully translated by Victoria Cribb, who has enabled us to appreciate this remarkable codex by making us forget that it was written originally in a language other than our own. Sjón has produced a narrative adventure in the spirit of Don Quixote and Ulysses, and one worthy of the praise it's received.