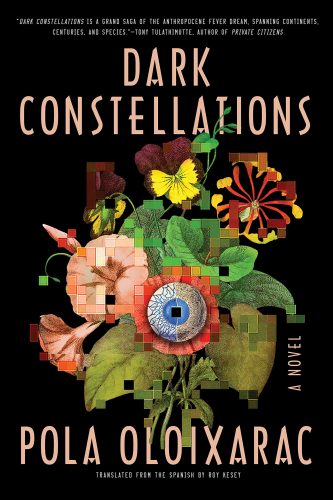 None of his life’s previous mental landscapes has prepared him for the microscopic spectacle of the glistening humidity gathered in those minuscule valleys. He fell to his knees, careful not to look directly at this eyeless fish, this mini-Jabba the Hut in its throne room. He opened his mouth, felt a vortex of suction twist his lips. He imagined the hypothetical ingestion of an extremely soft and airy muffin, sending his tongue in on an exploratory mission to capture bits of filling. (p. 95)

Other reviews I’ve read of Dark Constellations have either downplayed its eyebrow-raising sex scenes, or treated them as the unfortunate cost of admission to what is otherwise an interesting cyberpunk novella. I think this is missing the point. Sex is at the very heart of what Oloixarac is trying to do with this book, nor is its badness an accident or a failure on her part. On the contrary, what she’s trying to achieve with these overwrought metaphors and painfully unerotic descriptions is precisely to divorce sex from love, affection, passion, or even lust.

In the world of Dark Constellations, sex has one purpose: the exchange of genetic information. A young Argentinian graduate student on a research trip to Brazil who falls into a passionate affair with a local engineer is described as having “encountered the source of DNA that she would strive to reproduce” (p. 26). But even more than individual reproduction, Dark Constellations treats sex, and genetic exchange, as a sort of species-wide endeavor, of which individual members are merely an unwitting vector. One is reminded of the classic James Tiptree Jr. story, “A Momentary Taste of Being” (1975), in which humanity turns out to be a galactic sex cell on the lookout for its mate, regardless of the feelings, or pesky consciousness, of any individual member of the species. But Oloixarac goes further than Tiptree when she posits genetic exchange not only between human populations, but between humans and animals, humans and plants, and even humans and machines.

Dark Constellations, which was published in Spanish in 2015, and translated into English by Roy Kesey this year, follows three characters in three different timelines. In 1882, Niklas Bruun is the youngest member of a European scientific expedition exploring the caves in the island archipelago off the coast of Somalia, and searching for a plant designated Crissia pallida, whose strange properties include both inducing hallucinations and allowing cross-species pollination. In one of the caves, the explorers encounter a group of women and have sex with them, but later investigations suggest that the island where this orgy occurred was uninhabited, and it is implied that the women the expedition encountered were actually insects, or in some sort of symbiosis with a local insect species, perhaps enabled by the Crissia. Niklas goes on to become a renowned botanist (as well as a figure of fascination for the fashionable and debauched) and ends up in South America, in the orbit of shady collectors whose research, once again, crosses both the bounds of propriety and those that divide species.

In 1983, Cassio Liberman Brandão da Silva—the same man whose encounter with a vagina will later prove so traumatizing—is born out of the aforementioned encounter between an Argentinian woman and a Brazilian man, but possibly also out of strange rituals his mother witnessed during her abortive research expedition. He grows up to become a computer hacker who dreams of “a constellation of autonomous agents: sleeper cells, latent, perfectly invisible, scattered throughout public third-party servers all over the world. ... When the moment came and the proper set of signals was sent, the encrypted algorithms on the dark side of the globe would begin to execute their code, setting off on the mission they’d been built to carry out” (p. 68). And in 2024, a biologist named Piera is enticed to an Argentinian think-tank and techno-hub to work on the LatAm project, a genetic mapping of all humans in Latin America. There she meets Cassio, and together they concoct a virus that incorporates elements of both biology and computer science.

However accurate the description ultimately turns out to be, readers with a grounding in anglophone SF might balk at the characterization of Dark Constellations as cyberpunk, not only because of its emphasis on the biological, or its positing of impossible cross-species reproduction, but also because the subjects that often preoccupy English-language cyberpunk are largely absent from it. We might expect the focus of the LatAm project to be surveillance or capitalistic exploitation (and there are hints that certain government and business interests would like to use it that way). But in the space of the novel, its importance is more in how it allows scientists to map the transformation of the species:

The regional DNA databases made the public at large party to the silent revolution under way. Once available for analysis, the data showed genetic trajectories, a living public portrait of the concrete but typically opaque lives of individuals. Each trajectory functioned as an informational stand-in that could be consulted without involving its conscious human vector—as a political substitute that wouldn’t interfere with naked life but that reflected it in all its unquantifiable aspects. (pp. 139-40)

Or, as LatAm project founder Max explains to Cassio, “new theories about change and mutation ... had been left out in the cold by both classic and modern Darwinism: namely, that mitochondria may have originated when a type of virus first attached itself to simple organisms, turning them into machines capable of metabolization and storage” (p. 103). And when Piera is introduced to the LatAm project’s technological innovations, including “noses” that sample genetic information from public streets, she points out that the samples collected by these devices will inevitably include the genes of the various creatures who coexist with humans: “The dust mites on the skin. Intestinal flora, phages, bacterial growths in the mouth ... The human genome represents only ten percent of the cells that occupy our body space; the other ninety percent comes from the genomes of fungi, bacteria, protozoa. Like they say, percentage-wise, ‘I’ is mostly ‘them’” (p. 151).

In other words, the cyberpunk quality of Dark Constellations comes from its reimagining of humanity as a collection of different organisms, from viruses to bacteria to mites, who have bonded together in an act of cross-species commingling to create a more efficient vehicle for propagation and further transformations. And, the book argues, this process is still ongoing, and as of the novel’s end, incorporates into itself the computerized alongside the biological.

It’s heady stuff, and if the over-the-top sex scenes aren’t enough to undercut it (are in fact, as I’ve argued, an integral component of Oloixarac’s argument), the gender politics of the book are unfortunately less easy to tolerate. It can be hard to tell where Oloixarac’s characters’ attitudes (and the narrative’s satirical tendencies) end and where her own begin. She freely acknowledges Cassio’s misogyny, or the norms that lead his mother to abandon her academic career for a stifling life as an engineer’s wife. But she doesn’t give women as much space to be people, rather than objects, as she does for the men—even Piera gets significantly less space in the story than Cassio or Niklas. And despite the broader point she is trying to make with them, there’s no denying how some of the novel’s set-pieces—the opening orgy with the native women/spider-women, in particular—play into racist fantasies promulgated by Victorian explorers about the sub-humanity and innate sexual availability of non-white, colonized women. At the same time, the fact that a world-altering technological project like LatAm originates from Argentina, and from a technological hub specifically designed to lure back scientists, like Piera, who had fled their homes for the richer pastures of San Francisco, is a wrinkle rarely seen in anglophone SF, and worth celebrating.

Dark Constellations ends by moving away from its characters and towards the systems they create, systems that display intentionality without possessing the consciousness that we—especially readers of SF—tend to associate with world-altering events. The dark constellations of the title are the dark spaces formed by these unconscious processes, evidence of forces of nature working upon humanity and other species that can only be observed in the aggregate, not in the behavior of any specific organism. It’s therefore perhaps fitting that Dark Constellations lacks urgency in its own storytelling. Despite following characters whose actions are essential to the species-wide transformations the novel depicts, the narrative often has a sense of inevitability, as if Niklas, Cassio, and Piera were merely performing foreordained parts in a dance they are only dimly aware of. The somewhat detached, clinical tone of Oloixarac’s narrative voice (as observed, in particular, during her deliberately unappealing sex scenes) contributes to the sense that this is not a traditional story, in which character drives event, but rather one in which characters are driven to action by forces they don’t quite understand, and are helpless to resist.

Perhaps the best way to describe Dark Constellations is “different.” It obviously proceeds from different assumptions—about its genre, about geopolitics, about gender roles, about the history of fictional and non-fictional depictions of the periods it’s set in—than most anglophone readers of SF will be familiar with. The result is a discomfort that isn’t always allayed by Oloixarac’s sure-handedness with her material. Nevertheless, it is also this difference that makes Dark Constellations worth seeking out. Hopefully it will cross-pollinate with the genre at large, bringing added richness, and perhaps a new direction.