Reviews
Size / / /
I Am Behind You and I Always Find You by John Ajvide Lindqvist
By: Rachel Cordasco 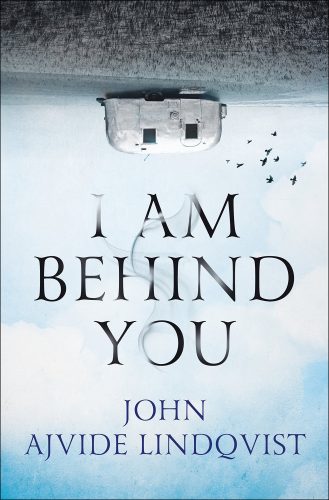 Some readers might know Ajvide Lindqvist from his first novel, an international bestseller about vampires called Let the Right One In (2004). If, however, you’re coming to the author without this prior knowledge—like I did—you’ll still get sucked into his horror stories. His careful plotting, unwavering narrative voice, and courage to delve deep into the darkest parts of the human psyche make him a horror writer to watch.

With the English-language publications of Let the Right One In (2007), I Am Behind You (2016), and I Always Find You (2018), as well as several other novels, Ajvide Lindqvist joins the ranks of such international horror masters as Koji Suzuki (Japan), Stephen King (US), and Thomas Olde Heuvelt (The Netherlands), who have become well-known across the Anglophone world and beyond. And yet, blurb after blurb on Ajvide Lindqvist’s English editions claims that he is the “Swedish Stephen King,” a title that is surely marketing gold and yet is quite misleading. Having read my share of Stephen King for over twenty years, I think I can safely argue that the only things these two particular authors have in common are that they write horror and often veer into existential and vaguely spiritual meditations on the vicissitudes of human experience. In other words, Ajvide Lindqvist is Ajvide Lindqvist, and that is a wonderful thing.

Translate by Marlaine Delargy, I Am Behind You (Himmelstrand) and I Always Find You (Rörelsen: den andra platsen) are the first two books in a trilogy called Platserna (“Place” or “Location”). The third book, X: Den sista platsen, is not yet out in English (we’re looking at you, Text Publishing!). If you’re trying to understand what this trilogy is actually about, reading the first two in the order in which they were written (and published) is somewhat confusing. In fact, if I was recommending these two books to you (which is actually what I’m doing), I’d strongly suggest that you read I Always Find You first. I Am Behind You can stand on its own, but I would have appreciated it and understood it better had I read I Always Find You first, since the latter is basically a thematic blueprint for the former.

What makes I Always Find You such an intense, engrossing, and ultimately satisfying read (when endings, and not just those of horror novels, are so hard to do well) is its ability to straddle reality and a kind of dark fantasy. The novel claims to be an autobiography: the main character’s name is John Lindqvist and, like the author, once tried to make a living as a magician before becoming a horror writer. Things then begin to happen in the story that make the reader seriously wonder exactly where the non-fiction ends and the fiction begins. It is this uncertainty that makes the story even more frightening. After all, this is not just Ajvide Lindqvist saying “gather ‘round, friends, and let me tell you a scary story.” It’s the author saying “this really happened to me ... or a version of me ... or …”. This makes it hard to easily separate ourselves from the world of the monstrous, the unknown, the threatening.

At first, I Always Find You reads like a depressing coming-of-age story about an aspiring and poor magician living in a rundown suburb of Stockholm in the 1980s. Pretty quickly, though, it shifts into a bloody, nightmarish tale that encompasses not only the author and his neighbors but the prime minister of Sweden at the time, Olof Palme. After John moves into a new apartment to try to make his name as a magician, he realizes that something strange is happening in the communal shower room in his apartment building. At first it’s just a feeling, but then he witnesses a strange black sludge oozing out of a crack in the ceiling and moving toward the bathtub. He quickly decides to buy a bucket, and “shower” in his apartment rather than brave that dreaded sludge from who-knows-where. It doesn’t take long for his neighbors to confront him, though, and ultimately initiate him into their circle of sludge devotees—for the sludge is not like anything known on earth (is it alien? something from another dimension?). All the characters have to do is cut themselves and then dip the cut finger/limb/etc. into the sludge to be transported to another “place” where they are truly themselves. Such a sense of fulfillment and euphoria is addictive, of course, but after a while the sludge starts to lose its potency …

I Always Find You feels so real, by which I mean that the reader’s uncertainty as to how far the main character’s experiences line up with the author’s gives the narrative a kind of immediacy. It can even feel as if the novel is pleading for the reader’s acceptance. Of course, alien black sludge is a stretch, but hey, who are we to argue what is and isn’t possible in this strange and often irrational world? Is this sludge the author Lindqvist’s way of turning his desperate loneliness and disorientation during that time into something tangible? When (the character) Lindqvist starts writing horror in the course of the novel, the reader’s own disorientation about reality and fiction only increases. 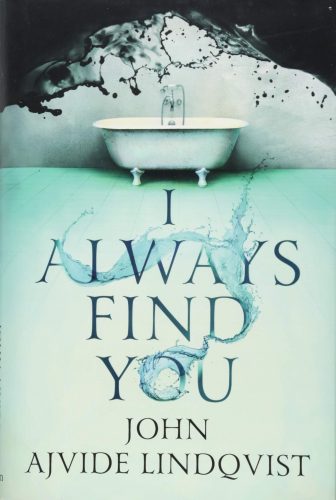 Only after reading this story about community, loneliness, and the ability to transport (as a kind of astral projection) into another, more “real” place, could I truly appreciate I Am Behind You. It overtly draws on every major theme in I Always Find You: the otherworldly aura of the Blackeberg Tunnel, the other “place” (described as a kind of “field”), a group of people bound together by their individual dark secrets and desires, and the burden of history. Knowing next to nothing about Swedish history, unfortunately, I wasn’t able to make the cultural connections to the country’s music, popular culture, movie stars, and other icons, something that would have enriched my reading. And yet, the author or the translator or both made it easy for readers not familiar with Sweden to appreciate nevertheless the multiple dimensions of the text: how the widely popular music of Swedish lyricist Peter Himmelstrand (to whom the novel is dedicated) has filtered into the Swedish consciousness, for example, or how the assassination of Olof Palme traumatized an entire nation and multiple generations (akin to the assassination of Lincoln or Kennedy in the US).

I Am Behind You takes I Always Find You as a starting point, as it is set entirely within the “field” that the characters in the former novel only visited. The characters in I Am Behind You, however, don’t choose to enter this “field”; rather, they just wake up one day in their camping caravans and find themselves there. They can’t figure out exactly where they are, or even if they’re still on Earth. The grass seems to drink up blood, the sun is nowhere to be seen, and there aren’t any landmarks or other people around. It’s just these four families, their stuff, and the void. Their radios only play Peter Himmelstrand songs, and each character sees different figures based on their individual traumas or deepest desires (Donald, for instance, sees the figure of his dismembered father who died in a sawmill accident; Majvor sees various incarnations of Jimmy Stewart; Peter sees his abusive, violent father, who was murdered). This isn’t exactly a new trope, but Ajvide Lindqvist deploys it well, weaving together these characters’ past experiences to show how their traumas share certain features, as if the author is trying to find a way to capture just how trauma is internalized and influences the rest of a person’s life.

Both novels are engrossing and entirely accessible to Anglophone readers, despite their references to a history and culture with which they might be unfamiliar. Delargy beautifully renders Ajvide Lindqvist’s stories into English while maintaining their sense of dread and indefinable horror. I hope that she is also the translator for the third novel, which I will definitely read, even though I read very few horror novels these days.

Before closing, I have to mention a pet peeve I have about the titles of these novels. The Swedish title for I Am Behind You is Himmelstrand, referring to the lyricist I noted earlier. While I understand that the word “Himmelstrand” wouldn't strike a chord in American readers like it would in Swedish readers, the name is explained enough in the novel to merit its place as the title even in the English editions. I Am Behind You, and I Always Find You for that matter, don’t seem to make sense as titles for these stories at all. I mean, one could come up with a tortured interpretation to make the connections, but the English titles seem slapped on—the kinds of titles that an Anglophone reader would expect a horror novel to have. I Always Find You seems to have no relation to the book itself, while the Swedish title actually translates into something like “Movement (or “motion”): the Second Place.” I don’t know who decided on these English titles, but I’m interested in the reasons behind them (perhaps there are good reasons).

Anyway: go jump into Ajvide Lindqvist’s world and prepare to be terrified, but also forced to question your own assumptions about the nature of reality and the power of your past over your future. Sleep well!

Like Loading...
© Copyright 2018 By: Rachel Cordasco
About Rachel Cordasco
Rachel Cordasco has a PhD in literary studies and currently works as a developmental editor. When she's not at her day job or chasing three kids, she's writing reviews and translating Italian speculative fiction. She runs the website sfintranslation.com, and can be found on Facebook and Twitter.
No comments yet. Be the first!