Reviews
Size / / /
I Stole You by Kristen Ringman
By: Julian K. Jarboe 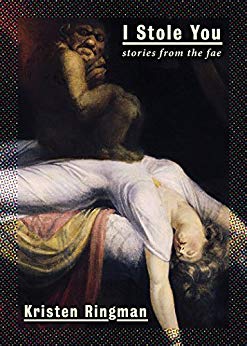 “We steal people like you. Humans who don’t just feel alone but are isolated. In a group of people, you go unseen like a fae creature, like a spirit.” (“The Meaning, Not The Words”)

The first piece in Kristen Ringman’s collection, I Stole You: stories from the fae is titled “The Meaning, Not the Words,” and it serves as a directional signpost for reading the rest of the book. I Stole You is both fourteen different narratives and one narrative, each part begun with the same three titular words. Though the author guides us on almost a global culture tour of times and places in which folklore tells of otherworldly beings that take people away, the narrative voice is steady, even artfully repetitive, across each vignette. Motifs and emotional arcs recur, especially around language that defies or extends past the verbal: sign language and D/deafness, but also body language more generally, and what it means to “steal” another person—in terms of violence against them, rescue and salvation of them, and the expanse of complex desires for and about them that run between these sets of intentions or outcomes.

Lesbian and bisexual desire and relationships feature prominently (the collection was a LAMBDA finalist this year), as do relationships beyond or outside of gender and sexuality (at least insofar as they evade specific pronouns or fixed statuses), and the more simple yet profound love of animal companionship. I Stole You is a speculative book, and a queer one, and specifically a D/deaf one (the publisher is a dedicated Deaf press).

It is also very much a dog book, featuring several tear-jerking canine stories; but, additionally, it is also dedicated to a dog: the author’s deceased friend-who-was-also-a-dog, Willow. I hesitate just to say “the author’s dog” because animals in this book are not possessions, though people often are. “Shining Orange,” my favorite story in the collection, uses the sometimes-disgusting reality of animal and human bodies alike to heighten how deeply loving it is to simply care for other creatures.

In some collections of linked pieces, the works echo or parallel or reverse and respond to each other, but “I Stole You” does not reference itself so much as it circles a shared center, producing almost a choral effect, which is part of why I call it both prose and poetry. Within this chorus, the morality of rescue, abduction, admiration, and predation blur together into a meditation on how a simple gesture can mean so many different things and how communication and intimacy may or may not form and rupture within and without one another.

“I grabbed you from behind. I wanted to be kind. I only wanted to hug you.” (“Nang Tani”)

“I kissed the back of your neck under your hairline. Then I opened my mouth.” (“The Art Lover”)

“I needed more sustenance. I needed you.” (“Love Within Tangled Branches”)

The churning first person does what I love best about first person in speculative fiction: it extends psychological point of view and treats unreal elements matter-of-factly or suggestively. The narrator/s are not to be fully trusted, yet they must also be taken at their word. A lament becomes an alibi, a confession becomes a memorial ode, and questions tell the reader more than their answers could. It’s an unusual book, maybe niche, but a rhythmic and moody experience that rewards a single-sitting reading and lends itself to being read aloud or signed along with the flow of the printed words.

Like Loading...
© Copyright 2018 By: Julian K. Jarboe
About Julian K. Jarboe
Julian K. Jarboe is a writer and sound designer living in Salem, Massachusetts. In 2016 they and their partner were artists-in-residence for a “Science Fiction and the Human Condition” themed residency at the Bemis Center for Contemporary Art in Omaha, Nebraska. Their work can be found on their website, toomanyfeelings.com, and they tweet @JulianKJarboe.
No comments yet. Be the first!