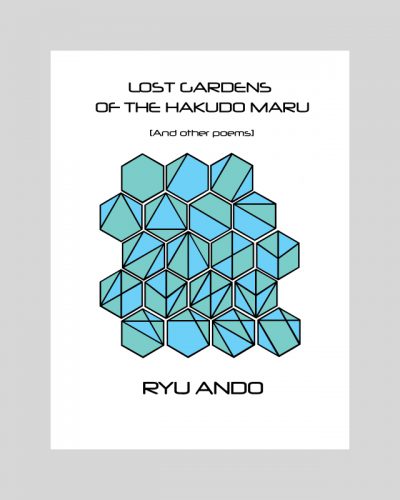 Ryu Ando's debut collection of poetry, Lost Gardens of the Hakudo Maru, opens with a birth and a scream. The lines may be familiar to readers of Strange Horizons, since the opening poem, "Season of the Ginzakura," appeared here in 2015. The poem begins:

On the day you were born
A screaming fell across the sky (p. 9)

Reread those lines. Settle into them (be unsettled by them). They exist in tension with each other, pushing and pulling, acting out a relationship that occurs repeatedly throughout this collection. On one side of the relationship is a familiar image, the beginning of a story of identity and family told to a child by a caregiver, maybe a parent or a grandparent. "On the day you were born" brings up a thousand contradictory associations—of warmth, of hurt, of love, of pain—but it's essentially recognizable, unlike the other side of the relationship. What follows the familiar is a rupture. An image we can't quite place, mixing the visual and audible, and using a noun that evokes both an action and an object at once. A thing we can't define—"A screaming fell across the sky." Where are we? What has happened?

A rupture of the familiar occurs in every poem here, and nearly every line. Familiar concepts and images are combined to unexpected effect. Our toes touch the ground and then we are pulled away again. This relationship between the familiar and the unfamiliar enacts a dominant theme in Ando's collection: the relationship of humanity to a universe that is primarily not human. Specifically, these poems inhabit the after-effects of empire and scientific conquest—the destructions that come from pursuing a belief that we (humanity) can identify and grasp the universe, using it for our own ends.

In "Season of the Ginzakura," for example, each section of the poem is titled with a term from the Japanese lunisolar calendar, followed by a portion of the equation representing how much energy is released when uranium-235 undergoes fission, as happened when the nuclear bomb known as "Little Boy" was dropped on Hiroshima. Within this frame, Ando places images of light (associated with radiance) and dark (associated with being burnt or scorched), as well as past (associated with aged waters, "recycled empires," and "deadened memories") and future ("without us"). The poem's kernel is the attempt to harness the power of the atom as a weapon; the poem's journey is of forces unharnessed, slipping beyond us.

Elsewhere in the collection, the relationship of humanity to the non-human is presented in the form of a quest, specifically a quest to the stars. "The Loving Spiral" speaks of past ambitions, the "we" of the poem traveling:

Outward to the conquest of empire
And the promise of immaculate
Contact, sanctioned and sanctified. (p. 15)

These past ambitions promised a clean encounter, in which the participants were separate and distinct, and in which the non-human could be known, named, and understood, folded into the colonizing power of empire. It's clear that this promise has failed. "Arrival looms," and the travelers have been so changed by the journey that they can't remember what they were seeking. They can barely remember who they are.

"The Loving Spiral" is the first in a series of ten poems, linked together under the title "Lost Gardens of the Hakudo Maru" (a mini-collection within the larger book). As this sequence continues, the quest becomes even more complicated, the straight shot out into the stars curving unexpectedly around. One of the recurring images of these ten poems is the infinity symbol, echoed in spirals, loops, and the ourobouros (a snake eating its own tail). Sections of the poems are separated by a tiny infinity symbol and the last poem in the sequence, "Spanning, As It Does, the Edge," includes a picture of the ourobouros as an epigraph. The poems, too, spiral. Images bloom and fade, the spark of consciousness described in "Dark Lotus, Black Noise" turning to "the spark-less paradox" in "Constructing the Box Apocrypha." The "open doorways" and "massive lintels" in "The Loving Spiral" change shape and implication in "Not Losing To the Wind," which states:

My steps through gates and lintels
And arches and circling orbits
In silent decay take me inward, (p. 27)

From the implication of doors that lead outward, we are taken to gates that turn in on the speaker, leading inside. "Inward" is one of the key words in these poems, as the increasingly desperate search for "Holy Contact" (p. 44) pulls the seekers into themselves.

In less capable hands, this spiral from the search outward to an arrival inward would be solipsistic, implying that human consciousness is all that exists—that nothing is non-human. I would argue that Ando is making the reverse move: even the human is, within itself, not human. At the end of "Not Losing to the Wind," another poem in the sequence of ten, the speaker states:

Though not solipsistic, this collection also isn't comforting. A common theme is that of hubris or ignorance followed by destruction and loss. In "Season of the Ginzakura," the references are to "recycled empires" (p. 9) and "futures without us" (p. 13). The ten poems of "Lost Gardens of the Hakudo Maru" talk of the past, when "ambition burned our fingertips" (p. 14) and a present in which,

You are ultimately splayed open
Like a book of prayer, exposed
For all of sentience to see (p. 42)

From the ambition to see and understand the universe, we are taken to a position of exposure—we are instead the ones who are seen. Instead of conquering the universe, the universe conquers us.

Still, for all their discomfort and descriptions of loss, I found moments of hope in these poems. It's a particular kind of hope, distinct from the comforts one human can provide to another, or the camaraderie of coming together to fight, or even the hard hope of human survival (humanity doesn't always survive in these poems). This hope is located in the recognition of the largeness of the universe, which extends far beyond the conquests of humanity and the ambitions of our various empires. In a time when the world is getting warmer by our doing and our leaders—elected or not—talk blithely of nuclear arms and of the slower deaths caused by institutional disregard and neglect, Ando's poetry reminds me that there is more to existence than is contained within our human systems.

His poetry also reminds me of the depths and breadths contained within our human systems. The images and structures of these poems are informed by a multitude of references, drawn from physics, science fiction, Japanese myth, literary Modernism, and more. Some references are marked; some are folded into the poems, waiting to be noticed on a future reading. The opening lines to "Season of the Ginzakura," quoted throughout this review, reference Gravity's Rainbow by Thomas Pynchon. Several poems reference "Ame ni mo makezu" by Kenji Miyazawa. Each reread yields new paths to explore—another line to research, another half-remembered echo to wonder about. (I highly doubt I've noticed all the references, and I certainly haven't understood all their implications.)

The images also come in multitudes. Reading these poems out loud, or to myself, they fill my mouth to bursting with immense, detailed images too large to hold at once. To return to "Season of the Ginzakura," which opens as follows:

On the day you were born
A screaming fell across the sky
That still reverberates down deep passages
(Deep into the wells that speak your name
In syllables formed with drips and drops and great sluicing
Waters
A million years old); (p. 9)

Each line expands the initial image. The "screaming" travels from the sky into the deep passages and the depths of the wells, from above the earth to below. Time also expands: from birth, which implies a beginning and youthfulness, to aged waters, incredibly old. The screaming extends through time, echoing from the past to the present ("still reverberates"). The punctuation accentuates the relationship of each line to the one before—Ando's stanzas are often complex sentences built with commas, parentheticals, em dashes, and semicolons, each indicating that the thought of the line before will continue to be developed in the next. Nothing stands alone. The world grows bigger, even as it (a part of it) ends.

Ultimately, I experienced these poems as paradoxical. They are poems of mourning, loss, and destruction. They ask demanding questions of our humanity. They are unsure of our place in the universe. Yet in that questioning, in that uncertainty, I see the very thing I love about humanity. These are not poems for every day, but when you have the strength, if you have the strength, I invite you to settle into the questions that are these poems (be unsettled by them). Let them expand you to hold the universe.

Like Loading...
© Copyright 2017 By: Sessily Watt
About Sessily Watt
Sessily Watt endeavors to embrace uncertainty and the limits of her own knowledge. She often fails, and tries to embrace that failure as well. Her writing has appeared in NonBinary Review and Bookslut. You can find her at sessilywatt.weebly.com and on Twitter as @SessilyWatt.
No comments yet. Be the first!