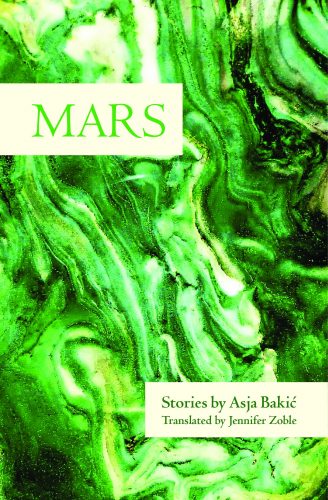 Spanning half a dozen languages that are little used outside of the region, the literatures of Albania, Bulgaria, Romania, Greece, and the nations formerly shoved together under Yugoslavia’s banner (Bosnia-Herzegovina, Croatia, Kosovo, Macedonia, Montenegro, and Serbia) rarely come into English translation. They are familiar to the Anglophone world through a growing catalog of novels from the same—typically older (or dead) male—authors: Danilo Kiš (Serbian), Milorad Pavić (Serbian), Ivo Andrić (Bosnian), Dubravka Ugrešić (Croatian), and Ismail Kadare (Albanian). These authors have stable audiences in the English-language world and are regularly discussed in scholarship and critical popular writing on world literature. Only rarely does a publisher bring out the work of a lesser-known Balkan writer; in the past decade, for example, the Albanian poet Luljeta Lleshanaku and the Bosnian-German novelist Saša Stanišić have gained wider prominence as contemporary writers. And now the independent publisher Feminist Press brings us a new voice from the Balkans, Bosnian writer Asja Bakić, in a short-story collection titled Mars that might succinctly be described as feminist speculative fiction and which ranges the gamut of weird, Gothic, surreal, magical realist, horror, apocalyptic, and science fiction.

Mars has no title story but its ten tales are bound together by references—both thematic and actual—to the red planet. In “The Underworld,” the final story, an unnamed writer reflects on her banishment to Mars for the crime of being an author: “I always read dystopian fiction carefully, [...] but it never occurred to me that I’d actually experience it one day.” Mars is both a literal space of exile for writers and books who have all been outlawed on earth, as well as an allegorical one that represents the writer’s tension with the society she critiques. Mars also represents the possibility for renewal. In this story, Mars and the writers become the new hope for humanity as earth’s moon abandons its terrestrial sister for Mars and the writers who bring it to life. Mars is a symbol of otherness, a place for the abandoned, but also a world from which hope might emerge—not unlike the lands of diaspora that displaced Bosnians have come to thrive in, or the new homes that women, queer folks, and people of color build as temporary autonomous zones free, if only for a moment, from the stressors of daily oppression.

As Ellen Elias-Bursać, a scholar of Bosnian-Croatian-Serbian literature, writes in her afterword to Mars, the planet also represents the patriarchal authority of the Roman god of war (and the saying that “men are from Mars”). The embodied experience of gender under patriarchy certainly takes center stage throughout the stories, which feel as though they might be familiar to the author herself, even as they take place in circumstances and worlds that (we think) are impossible. In “Asja 5.0,” for example, the title character is named after the author, and is herself an author; she is, she thinks, the original out of a set of cloned Asjas, but this is always in doubt. She lives in a world where sexual desire, the ability to fuck at all, has disappeared; the idea of sex has become a fetish and Asja is on the run from a rich villain who employs her to write erotica in the hopes of becoming aroused. “Asja 5.0” is hilarious, awkward, disturbing, and pleasurable, weaving together the complications of sex and desire under heteropatriarchy. Moreover, Bakić gives us a brilliant ending in which her fictive clone becomes the first person aroused in years—after meeting another Asja.

Sex, identity, and writing spread across Mars’s pages. In “Day Trip to Durmitor,” an author (whose lifestory is uncannily similar to Bakić’s) finds herself in Purgatory, only to be released from death when she pens the perfect novel. The unnamed author eventually succeeds in doing this, immortalizing herself and rising again in a zombie horde of Great Writers who set out to devour brains. As an angel puts it, “Why do you think zombies devour human brains? [...] It’s not like writers spend their lives obsessing over genitals or feet.” Dry, dark, humorously critical  of authors’ obsessions with their craft and legacy, Bakić continues in this vein in the collection’s least speculative (and most frightening—you be the judge) story, “Passions,” in which an author who hates dealing with the public discovers that she is supposedly the pseudonymous writer of the year’s biggest erotica hit, Passions. As she investigates the identity of the mystery writer she suspects her only previous lover, only to discover that a woman she hardly knew had written the book to get her attention, to express her unrequited (and unknown) love. It’s a chilling story of desire distorted, of the ways in which “reality” is itself always speculative.

Bakić’s stories are a dark delight—a treasury of forbidden pleasures, moments of resistance and resilience, and terrifying possibilities. Many come to the sort of subtle, yet world-altering twist that led people to love the short-story form to begin with (recall first reading of an O. Henry story, or Clarke’s “The Nine Billion Names of God,” or Le Guin’s “The Ones Who Walked Away from Omelas”) but which has, in my experience, dropped out of much recent SF short story writing in favor of sustained, multi-story worlds or closed-ended narratives that, while interesting, don’t really say or do much. When Bakić’s stories don’t revolve around some final twist, they create surreal universes that seem utterly plausible and frightening in their speculative realness. “Heading West,” for example, reimagines the refugee crisis in Europe by narrating the story of Europeans’ escape to Africa, a promised land free of war, famine, and ecological catastrophe.

Bakić’s stories stick in your craw, keep you wondering and returning. They resonate a feminist understanding of the world that is attuned to the body, to pleasure, to the omnipresent threats of (hetero)patriarchy, and that uses multiple tonal modes (comedic, satirical, melodramatic, realist) to imagine what it means to be a woman—to be a being—under the shifting political landscape of the twenty-first century, reflecting no doubt on the sexual and political violences that closed the 1990s in Bosnia.

Unsurprisingly, the geopolitical circumstances of the Balkans over the past four hundred years have produced a shared literary tradition about death, state bureaucracy and violence, and the magical irrealities of everyday life. If Mars is any representative of her oeuvre, Bakić certainly belongs to this tradition; a lady too old to travel to Africa in “Heading West” remarks that “We’ve suffered [...] But there’s no despairing. The dinosaurs didn’t survive, and they were enormous. We’re tiny but resistant, like cockroaches.” There’s hardly a more “Balkan” sentence. But Bakić does her own thing, following her own admission (quoted in the afterword) that “I have no wish to write about myself or write myself down in countless versions because I have social media and my blog for that kind of writing.” Instead, Bakić ramps up the sex and the weird, and abandons the sense of grounded locality that much Balkan literature absolutely obsesses over. In Mars, there are few names or places or specific political references that cry to be read as “Bosnian” or “former Yugoslavian.” Sure, names like Nataša and Vanja or places like Durmitor make their appearance, but the stories use these local references to tell stories that appeal beyond the ever-shifting borders of southeastern Europe.

It seems in light of this that Bakić’s stories are meant to speak to an imagined audience of contemporary global young women living under presumably similar experiences of (Western, Euro-American) patriarchy in the first decades of the 2000s—an audience that might best be described as the mainstream of liberal feminism as it manifests in most of Western Europe and North America. Bakić, of course, comes from a highly secular but Muslim-majority post-communist European nation that sits on Western Europe’s doorstop, not wholly incorporated into its economic transendence and still operating very much as a second-world nation (though she lives in the much richer EU member to the west, Croatia). Bosnia, moreover, has experienced war and genocide within the lifetime of the author, where sexual violence was weaponized as part of the Serbs’ ethnic cleansing campaign against Bosniaks. Her stories thus inhabit an interspace of tension between, on the one hand, the globalized liberal feminist audience that Balkan literature, even by women like Ugrešić who are read worldwide, has rarely tried to appeal to; and, on the other hand, her social, political, and historical positionality at the edge of that audience. While this is true of many women authors from the postcolonial/post-Soviet/post-communist world, Bakić represents a new voice and era in the global circulation of Balkan women’s writing.

Like recent feminist SFF story collections by Kelly Link or Carmen Maria Machado that have had significant appeal across genre and literary fiction markets, Mars is a tour of its author’s twisted imagination, where this hallway leads to death, that one to sex, and sometimes they’re one and the same. While Machado’s Her Body and Other Parties was a major hit—having won or been nominated for more than a dozen SF, fantasy, horror, and literary fiction awards—and each story/novelette was in some way speculative, Mars is a much more consistent collection in terms of individual story quality. None is so alike another in content or tone (aside from a light, even humorous sense of darkness pervading the collection) that it blurs the stories in the reader’s memory. Bakić’s tale of a forest witch punishing another for killing her lover (“The Talus of Madame Liken”) speaks through horror and crime drama to voice concerns about how women treat one another with regards to male friends/lovers under patriarchy, while the following story, “Abby,” uses the impending reality of artificially intelligent robotic sex companions to explore emotional abuse and resistance. This book cannot be read in one sitting, though Jennifer Zoble’s translation from the original Croatian flows smoothly and strongly tempts the reader to do a mad dash through Bakić’s worlds.

Resist the urge; breathe between the stories. Take Bakić’s violent delights in stride.

Like Loading...
© Copyright 2019 By: Sean Guynes
About Sean Guynes
Sean is a reviewer, critic, and historian of SFF and horror who lives in Ann Arbor, MI. He is co-editor of Star Wars and the History of Transmedia Storytelling (2017) and Unstable Masks: Whiteness and American Superhero Comics (forthcoming, 2020), and editor of SFRA Review. He can be found online at @guynes or seanguynes.com.
No comments yet. Be the first!